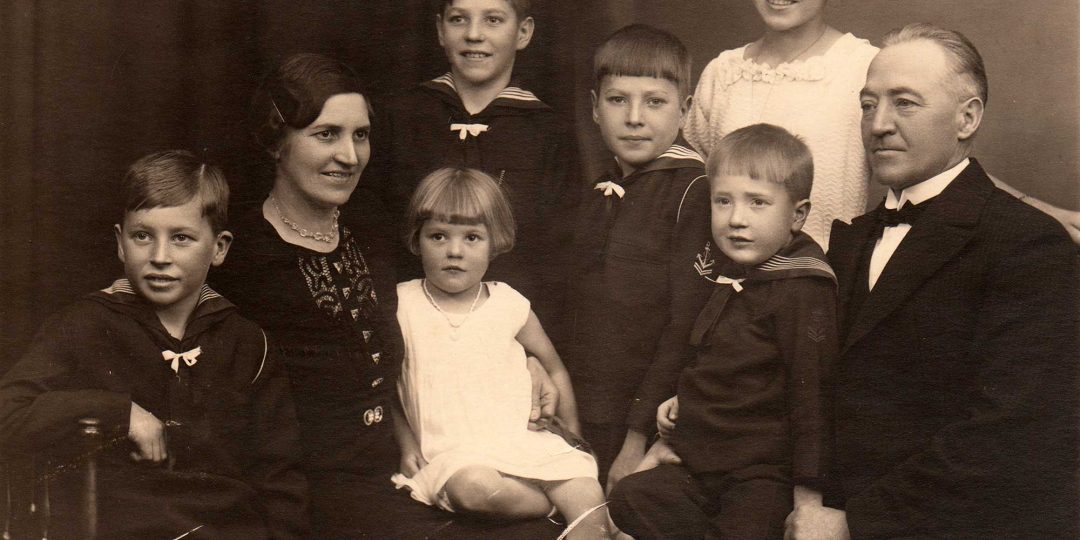 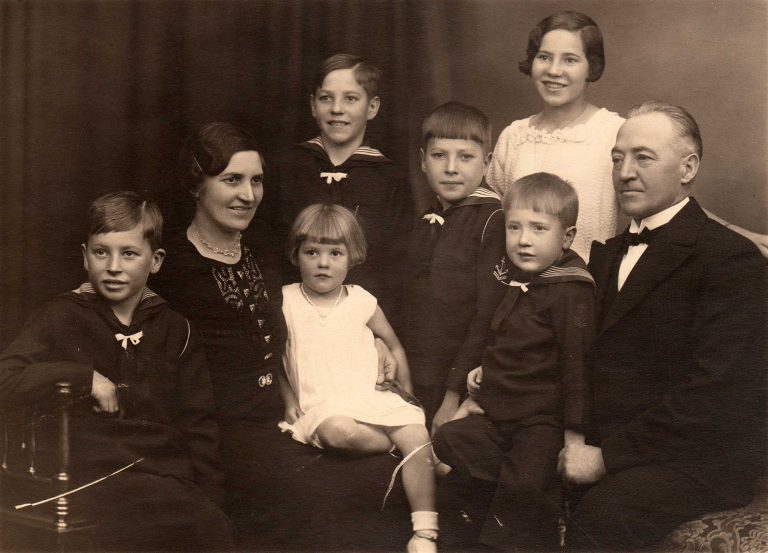 So I thought we would start off by continuing to talk about your aunts, your uncles, your memories of them. Can you remember the names of your aunts and uncles?

Yes, my mother’s sister was Agnes and she was a dressmaker. She was very very good at her work and always made people look fantastic – she had a good eye and she could cut without any measurements at all. She just looked at a person, then she would cut and it would fit. I think that’s a gift. But I saw that repeated in Ealing while we were having our kitchen done. A carpenter, the person who was making the kitchen top, looked at the wall and then he just cut along and it just fitted into the wall – absolutely amazing. I don’t know if people can be taught that kind of craftsmanship or whether it is just something in you. I can’t do it.

It’s a wonderful skill. And what else do you remember about your aunt Agnes?

That she was very beautiful and she had very long hair. She said that she used to be able to sit on her hair, which really tells you something. She was very beautiful and she was, as I said, very clever and she also wanted to learn English. So it was her books on teaching English that was my first introduction to the English language. She was a little bit older than my mother and she was very beautiful. My mother was very dark but my aunt had golden hair, long golden hair that she could sit on, it was beautiful. And she used to make all my dresses when I was little and she always made me feel like I was a princess in the clothes she made for me.

Can you remember any of the clothes she made for you?

Not really, no, I think perhaps there were too many for me to think about. But there was one dress that I remember. That was a pink underskirt with a light coloured top over it with embroidery all round the edges, little roses embroidered all round the edge, very very nice.

Sounds lovely. And can you remember any of your other aunts and uncles. There was Agnes…

And then there was my mother’s youngest brother Per. He was also very good looking, charming in every respect, much loved by all the girls. But he only had eyes for one – the neighbour’s daughter. Only the neighbour’s daughter was wealthy and her father wouldn’t let them marry, not until he had got enough money together to buy a farm for them. So he went to America to make his fortune and sort of did, only it was in the aftermath of the war, so money didn’t last so long then. But they did buy a farm and they had three beautiful sons and a daughter.

Which part did they go to in America?

I’m not sure – the rest of the family was in the western part of America so I think that was where he would have gone because his two older brothers were in Colorado, and one was a farmer and the other started a dairy where he made ice cream and made a fortune, as you should (laughs).

Yes and the youngest of those, Christian, was the one who brought his wife and children to Denmark in 1935 and I wanted to be able to talk with them when they came. So about a year before, I managed to persuade my mother to let me learn English from the teacher’s wife who had training as a correspondent in English. And that’s where I got my accent and everything.

So how old were you started to learn English?

I would have been 13 I think when I began.

And can you remember what it was like to learn English?

Yes, and I’m very very pleased that I did because of course it came in very useful when much much later after art school I met my husband who’s an Englishman and came to England. That was in 1946.

Going back to when you met your cousins from America, can you remember what that was like?

Yes. David was 14 then and his sister 4. And they were very, er, very American I suppose. They were used to taking centre stage in every place. We didn’t do that. We didn’t know how I suppose. That wasn’t what well brought up Danish farmer’s children did but we were very impressed by our two cousins, and we’d do anything really to be as clever as them. And my aunt, my American aunt, she was impressed that we had put so much into meeting them so we corresponded for many years in fact, till the war came in ‘39.

Was anybody apart from you able to talk to them in English?

Well I suppose there would have been the pastor and the teacher. But otherwise that wasn’t part of schooling at that time, that came later. Today all my nephews and nieces learn English at school – it’s a matter of course.

I wanted to be able to talk with my cousins when they came to Denmark in 1935. So about a year before, I managed to persuade my mother to let me learn English from the teacher’s wife who had training as a correspondent in English. And that’s where I got my accent and everything.

So returning to your aunts and uncles, are there any others you can remember in the family hearing stories about?

Yes, when I stayed with my grandmother the first thing that I wanted to see when I came to her house was any new photographs of our American family and of course there were quite a lot of us in Colorado and later on in Canada, so we are a very big family as you can see, spread all around the world. I believe that I myself have 25 great nephews and nieces. I keep trying to keep on top of their development (laughs).

Are you in touch with them?

Some of them, yes.

So maybe now we could move on to asking you about your brothers and sisters. First of all tell me their names and when they were born.

Well my eldest brother had asthma so my parents had to decide that he should not be a farmer because there are too many hazards in farming for asthmatics, but, sadly you can plan things but it doesn’t always work like that. My father died very suddenly in 1942 and that changed everything, so my brother felt that he had to give up his studies. He had by this time decided he wanted to become a veterinary surgeon, but he now felt that he had to help my mother with the farm. The next brother, who had by this time got used to the idea that he would take on the duties of the elder son, wasn’t so happy about that.

Can I just ask you the name of the brother who had asthma?

My eldest brother was Søren. And the next one Laurits. And the third Poul. And the little one was Steen. He is in Australia now and Poul is in Canada.

So please tell us more again the second brother, Laurits.

Yes so he bought a farm close by that had quite a large wood attached which he loved and he grew Christmas trees, and every Christmas they had Christmas trees for sale, quite an event. He liked that. He also used to arrange Christmas parties for the neighbours children in the woods, which was nice, very nice. His wife is Sinne. And he had two children, one called Tina who’s the youngest. And his son is also called Laurits, who is of course the older. And Tina is going to come over to visit quite soon together with her husband and their three children.

And your next brother is called Poul, can you tell us about him?

Yes, he is in Canada married to a Danish woman and he has two children and I believe now two grandchildren. And we only manage Christmas cards really, and birthdays. But life takes you, doesn’t it? So everything changes.

And the next brother?

Steen, in Australia. He also married an Australian woman and they had two children and one is married and he has three grandchildren, which is nice to know. And I was very lucky to be invited by two former students in Australia, and both of them wanted me to speak to their students, so naturally I thought that was delightful, I liked that very much. But they decided that in that case, the British Council could pay, which they did. So my husband and I spent nine lovely weeks travelling around Australia and seeing everything, that was amazing.

So going back to your brothers and sisters, who comes after Steen?

My sister Grethe. Elsine Margrethe really, but Grethe for short. And she married an Australian and they have three children who are now, the eldest son is not married, but the next one is also Søren (laughs), and he and his wife are coming also to visit so that’s nice.

So you’re the oldest, and who comes after you?

After me comes Søren, then Laurits, then Poul, then Steen, then Grethe and Ruth and Inge.

Going back to your childhood, can you remember what Søren was like?

Yes. He was quiet, looked after us all. We relied on Søren for everything. He always made jokes, that was nice. Poul was also quiet and he was particularly fond one of our maids called Jakobina1 and she looked after him mostly during his childhood. And, you see my mother of course was very tied up with everything with the farm and all the children, things like that. But it was really really hard when our father died and she had to begin to run the farm until my eldest brother was old enough to take over. And that was very hard for everybody, but my mother always felt very strongly that we shouldn’t lose all our dreams that we’d had before our father died, that we should still do the things that we wanted to do. So when I wanted to become a weaver and go to art School in Copenhagen she found a way to make it happen, and the same with Grethe who wanted to be a nursery teacher, and both Ruth and Inge wanted to be doctors and she managed that too.

Going to back to your childhood again, what were the age differences between you all?

I am 18 years older than my youngest sister, who was two and a half when our father died, and Ruth was 16 years younger than me. Grethe was 10 years younger, and I’m not sure that I can remember exactly how much difference Steen would be… nine years younger.