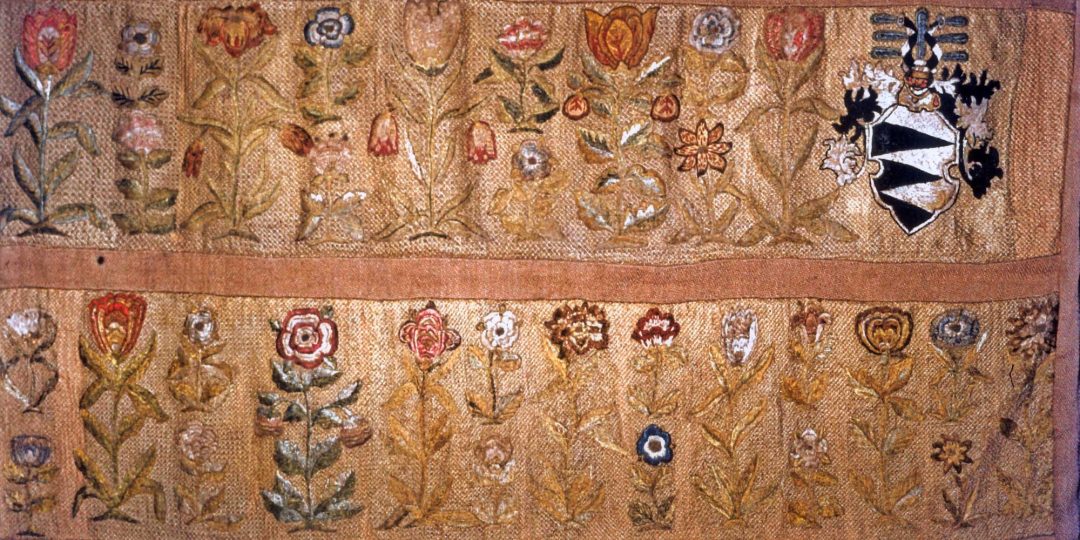 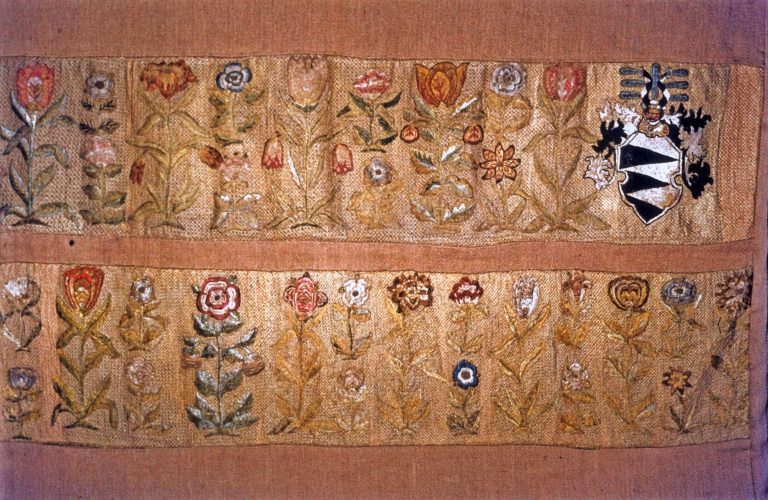 So tell us about the church and how important it is to you.

The church is 11th, 12th century when a good many of the village churches in Denmark were built and of course the tower was added later and so was the weapon house, which is the entrance that was termed “weapon house” because you had to leave your weapons there before entering the church itself. 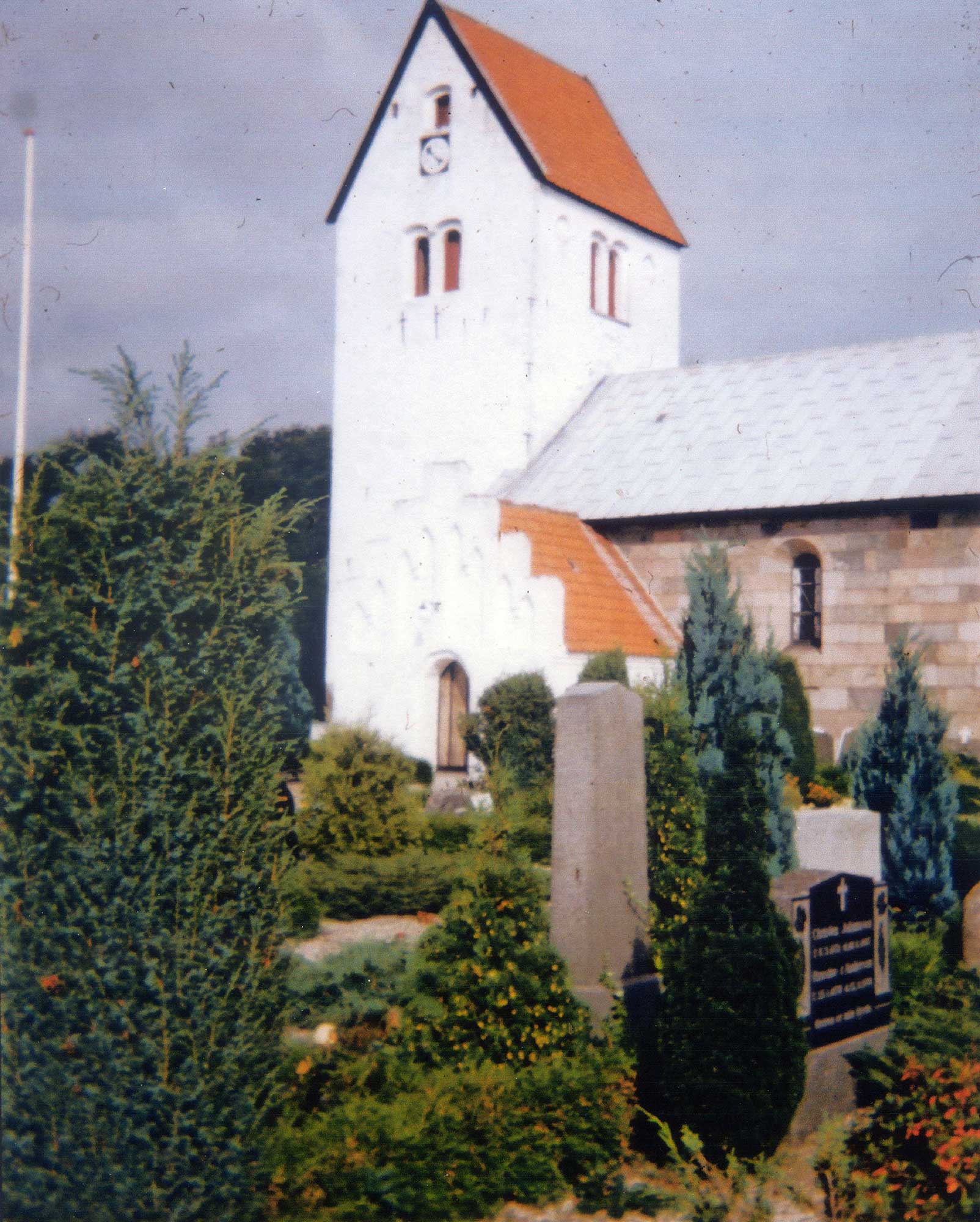 Well yes that was the tradition in Denmark – I think you took them in to the church in England (laughs). Anyway our plot is there. This is my parents gravestone and there’s another plot a little bit further along where my uncle and aunt are buried, and my grandparents.

So tell us about the portrait of these people.

My sister photographed it to use for a lecture for the Royal Society, and it’s a long time ago, the light is not very good. But I think you can see she was much younger than him, and he died early.

What are their names? Who are they?

They were owners of the stately home called Sødal and so they were nobles. And his name was Anders Kjærulf and her name was Margrete Dortea Braës, and he died young and she then took over running the whole area including the three churches that belonged to the estate. 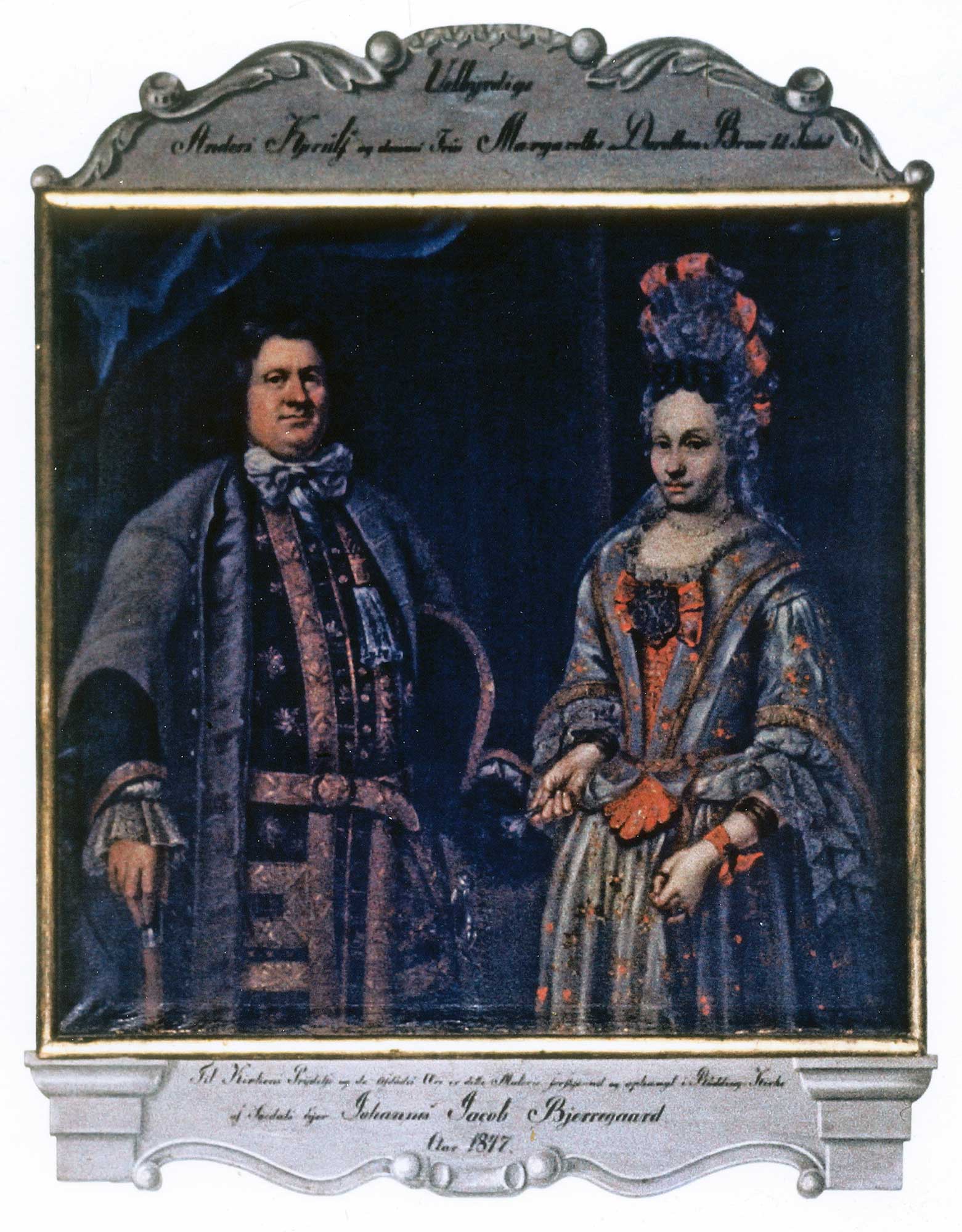 Yes, and she then did a lot to beautify the church, to look after the whole village. She created three schools – one in each of the villages, so she was obviously a very clever woman, a very determined woman, who did a lot and I’m quite certain did this embroidery that was fixed to the altar, was probably from her own bed – the valance at the top of the bed. And she also gave this embroidery.

Do you know who did this?

So this is a detail of that embroidery.

Do you know who embroidered them?

I don’t think they could have been embroidered in Denmark. So it may be that she imported it from Germany. I believe that this altar would have come from the south of Germany.

So what age did you first go to the church, can you remember at what age you realised that you were in a church?

I suppose we were all taken to church as a matter of course.

Can you remember when?

No I can’t remember, I can just remember not listening to what was going on and being intrigued by all the paintings and by the people depicted.

I remember sitting there thinking ‘how could she possibly marry an old man like that’ (laughs). This was very much on my mind. So here you have a close up of the embroidery on the altar. One of my colleagues on the International Council of Museums from Nuremberg looked at it and she thought that it would have come from the area around Nuremberg. She said she would look into it but she died before she found out. 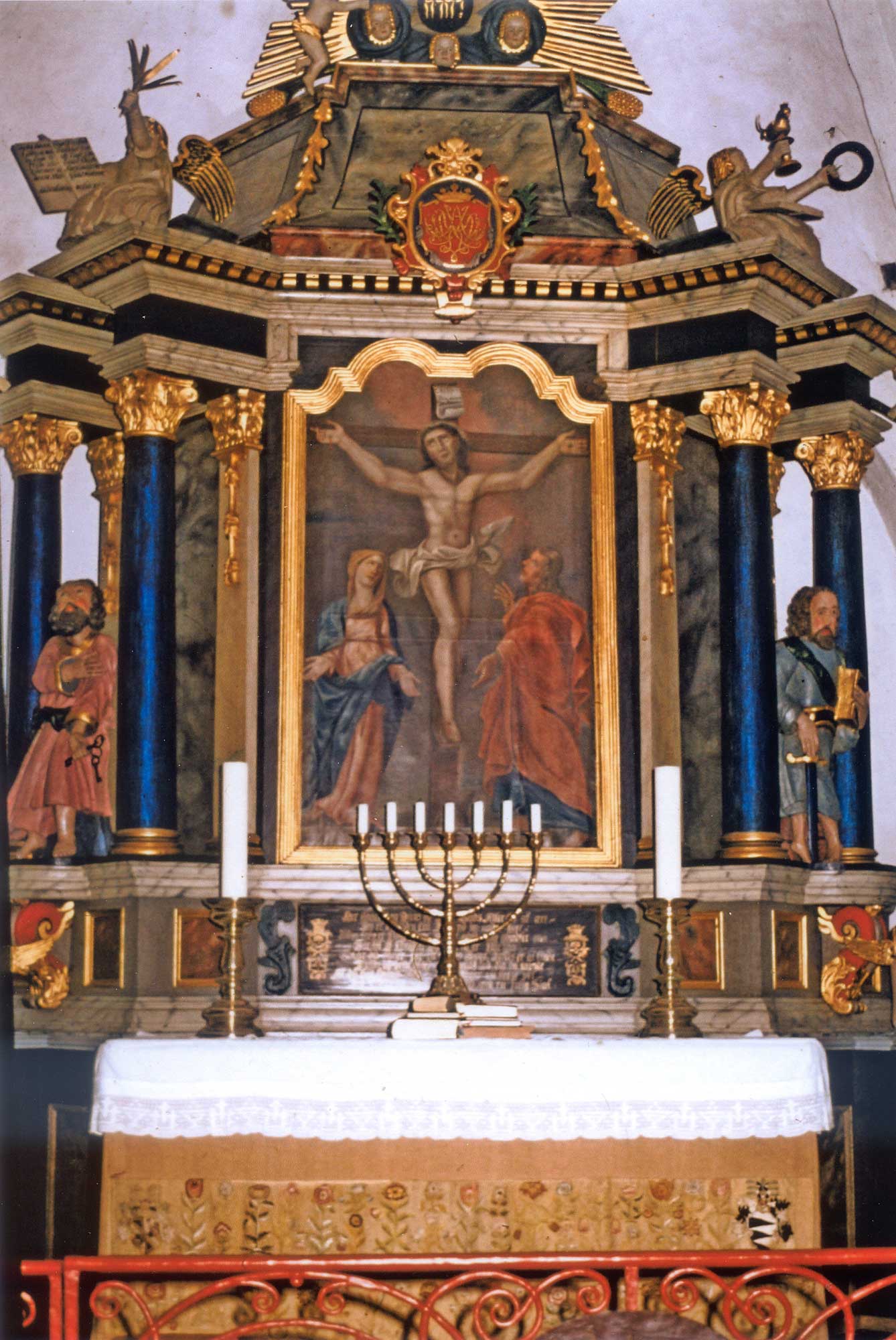 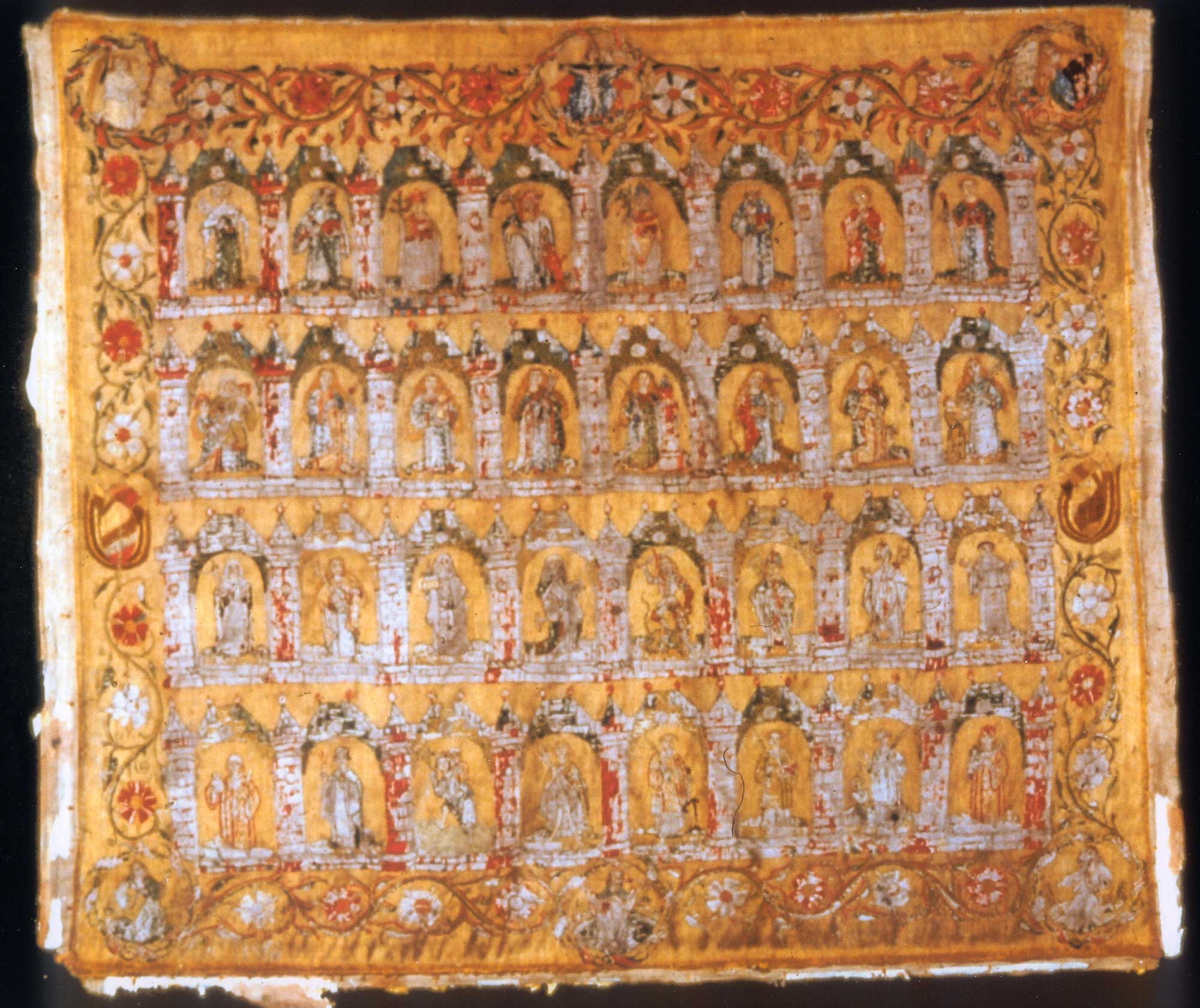 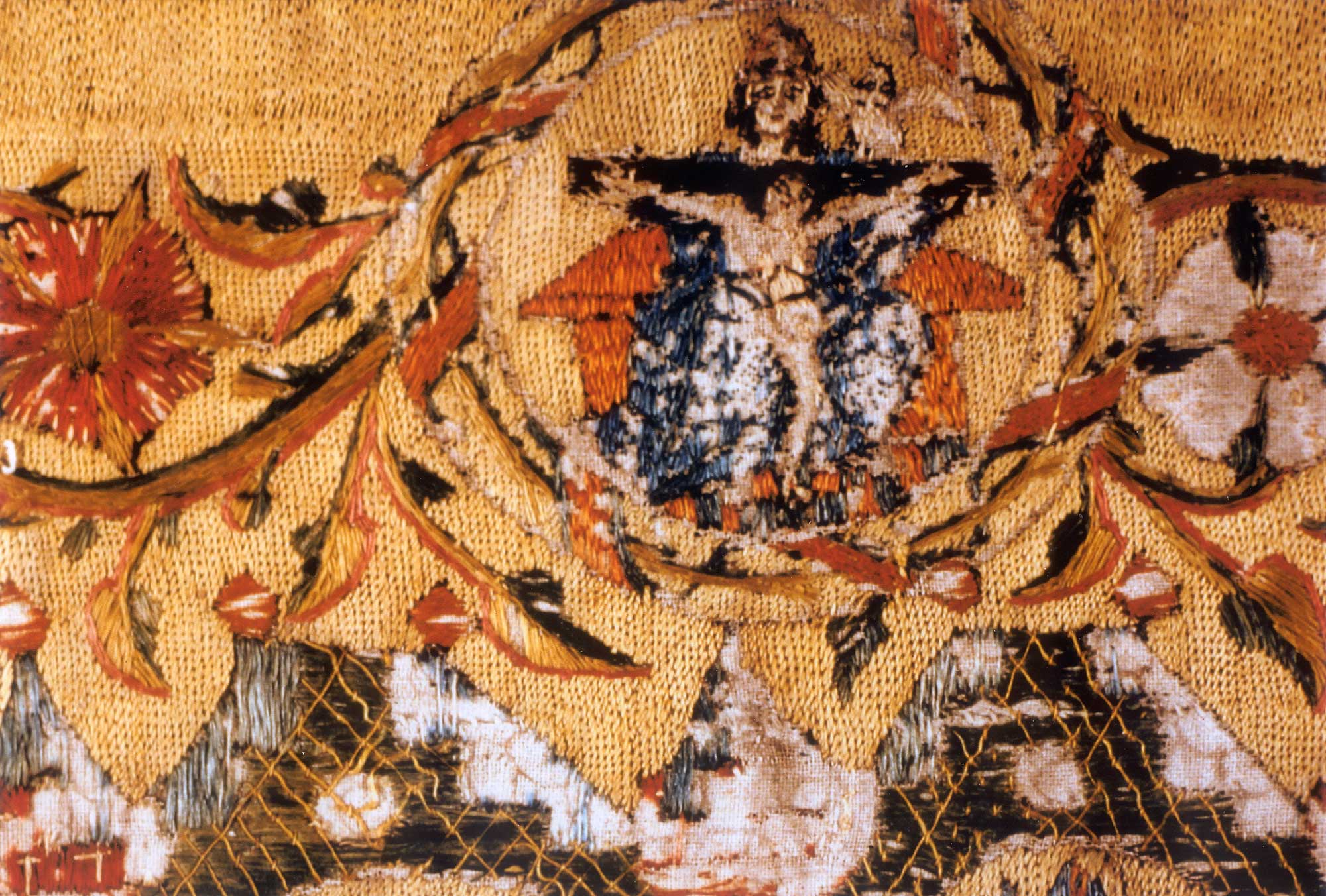 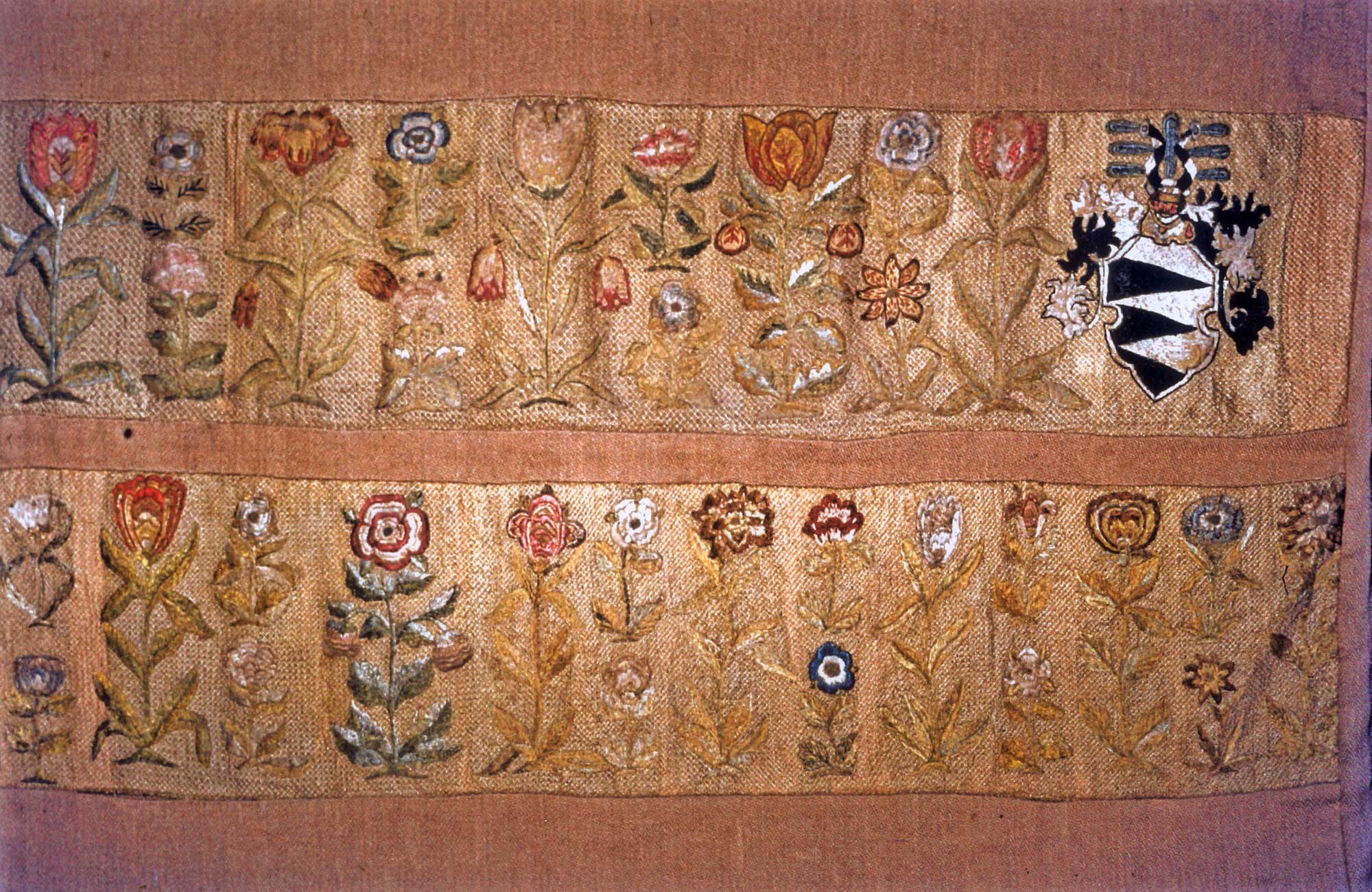 Oh how awful. It’s very finely done isn’t it? Do you want to talk about, because it’s such a significant influence on you, do you want to tell us why you were intrigued by this?

I’d never seen anything like it, it was the place before the altar, as you can see. I suppose to keep everybody in their rightful place. I thought it was an amazing thing. You possibly can’t say that it’s very beautiful but I was intrigued by it, as I was with everything in the church, but I think that these little figures…

Until I saw my sister’s slides of it I really believed that they were pink little babies just like my brothers and sisters (laughs), and then the slides came and these horrible…

You weren’t impressed by the carving then?

(Laughs). No and I realised that we all see more with our mind’s eye, so surely the beauty is in the mind of the beholder. 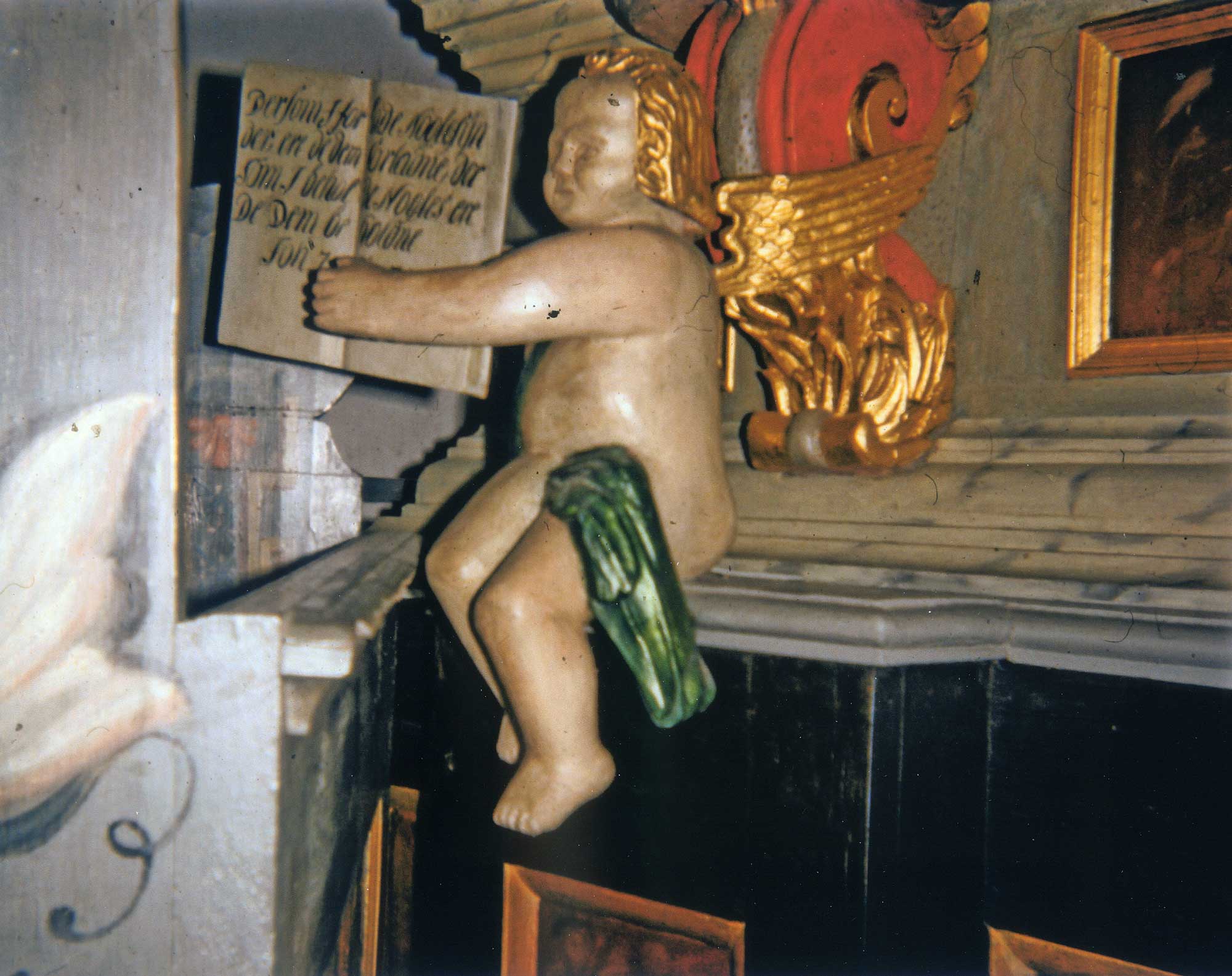 Cherub at altar in Rødding church

Yes, because we see them as very stylised, don’t we?

And I think that was one the principles that I taught from. Nevertheless I do think it’s wonderful.

So the interior of the church is where you first realised that you had an eye for design?

And the embroidery is spectacular here and you think that these are the valances, off of her bed?

Yes, and I’m not sure whether that’s her crest, or whether it could be her husband’s.

So the two embroideries in the church, there’s this one – the valances on the altar front – and then there’s that one as well.

And there was the pastor who came to my church when I was 13, no, quite small, he was there for seven years and he confirmed me, just before he took up his second position in Copenhagen in the Royal Navy Church, and he took my weaving in hand a little bit. He also looked after the library and I think I borrowed a book every day on the way home from school. And he was a bit bemused when my brothers also began to take, and one of them had to tell him that the pig had eaten his book.

Because as children we were the ones who’d sit with sows when they had piglets, and the pig ate the book (laughs). 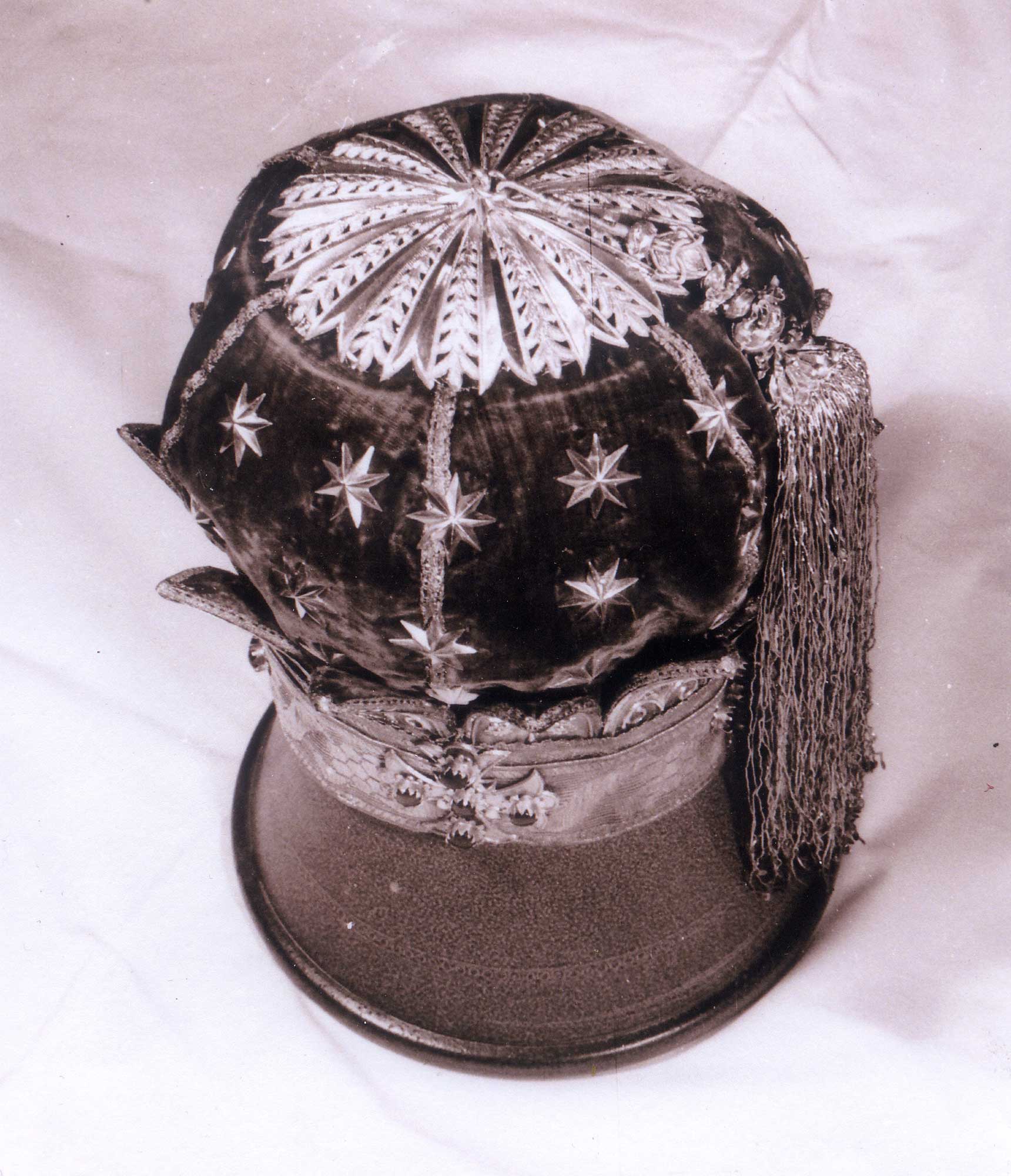 The crown of the Emperor Tewodros II of Ethiopia

And you got married in Copenhagen, didn’t you? The same pastor married you, didn’t he?

Yes so when I went to art school I spent a lot of time with him and his wife, and they had eventually five children and one of them is one of my very best friends.

So shall we look at some of the objects?

This was the first object that I did after leaving the Victoria and Albert Museum in order to get back to weaving and design. I think it happened about five times.

Never quite got there?

(Laughs). Never. This was the crown worn by the Emperor Tewodros II of Ethiopia, who would have been one of the ancestors of Haile Selassie. We did that in… I think there should be a date there…

Yes that’s right, one of the first commissions I undertook after leaving the Victoria and Albert Museum. And it was kept at the Wallace Collection, where it had been since it came into the Royal Collections.

What’s the actual object and who did it actually belong to?

It belonged to the Emperor Tewodros II – I think that’s how you pronounce it – of Ethiopia. So when the Queen and Prince Philip were invited on a state visit to Ethiopia they thought it would be nice to give the crown back to Haile Selassie.

When you’re a textile conservator, you’re stealing sometimes the objects you’re working on – most people only get to see them in a museum in a display case. We actually get up close and personal with the object and look at them in great detail. It is a great privilege to be able to do this work and Karen has great stories about when she was in Ealing and when she first started out, when she was given Haile Selassie’s crown to conserve. And it’s just amazing because she had it just on the table in the house and her friend came round. And Karen had just looked at it and thought yes, yellow, red, white stones on the top. And this friend said maybe you don’t want to have that on show so much. And it hadn’t dawned on Karen that these stones were actually ruby diamonds and extremely precious. And there’s another story where she’s working on some flags, and they also had white, yellow, and red stones in them on the top, and green ones. And her friend said yeah maybe you should move those as well. So in true Karen Finch fashion, she put them under the bed, as you would, just to keep them safe. And it’s amazing to think that she had these incredible objects that would never even be let out of a museum today, just in a house in Ealing and it was just normal for her to have that sort of object, and just to conserve it because we were interested in the object and not necessarily the value that would be placed on that object. It was an object, yes, so it is wonderful to hear her talk about this.