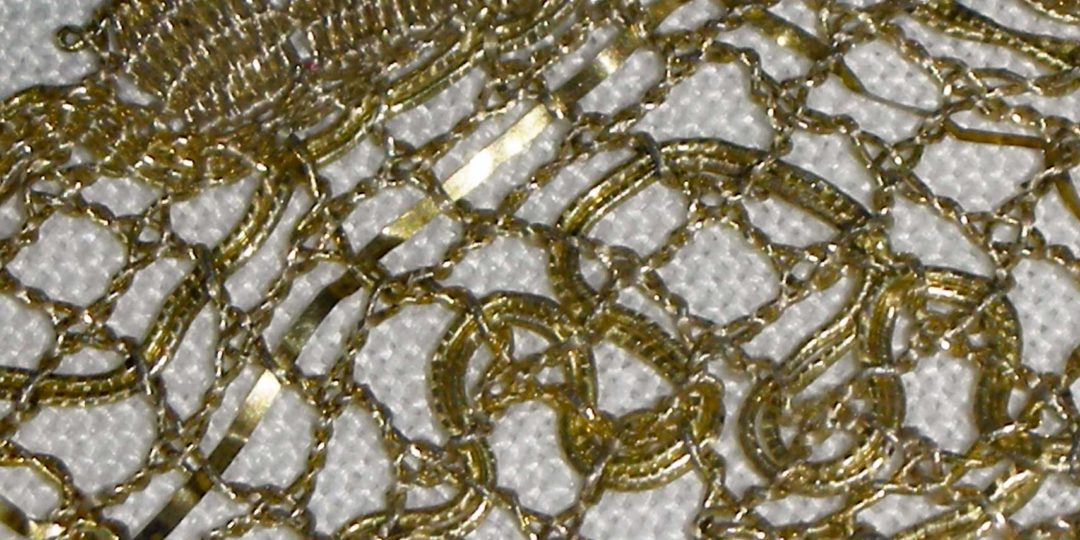 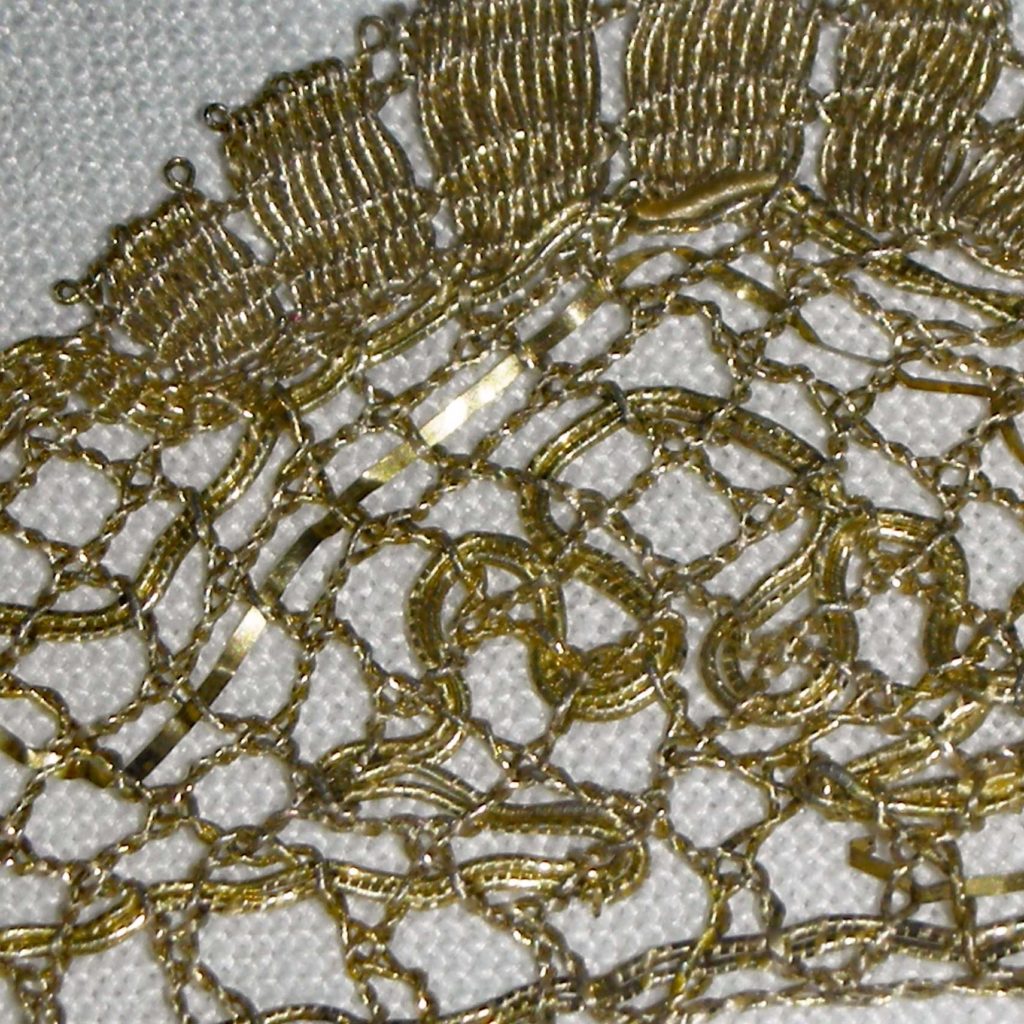 The following talk was given by Philip Sykas on June 6th 2019 as part of the Early Textiles Study Group’s (ETSG) biennial conference, held in Glasgow and dedicated to the memory of Karen Finch. Click here for more information.

One of Karen’s lectures, featured on the website, that will interest those studying Early Textiles is entitled “The History and Techniques of the Spinning of Gold Thread.” Not only was gold as a textile fibre, and gold embroidery, an enduring fascination for Karen, but this lecture also serves to illustrate Karen’s approach to textile research. She prepared the lecture for the first conference of the Early Knitting History Group in 1998, but I recall that Karen also delivered it for the Early Textile Study Group in the year 2000.

Those of us for whom English is our mother tongue can easily forget that a great deal of important work has been published in other languages. And if we are to avoid re-duplicating the work of others, then it is crucial that we must communicate with colleagues internationally. Karen set an eminent example here, and individually put much effort into making sure that we would know more about Danish textile research. In the case presented today, she saw that there was much of value to be mined in Sofus Larsen’s book on Nordic Goldspinning and Gold Embroidery of the Medieval Period, published in 1939.

Sofus Kristian Larsen (1855–1938) was a Danish librarian and philologist. Soon after graduating from the University of Copenhagen in 1880, he began as an assistant at the University Library, eventually becoming its Head in 1909. His research focused on ancient and medieval cultural life, and he published important works on Female Hand Crafts (1915), Nordic Dream Trees (1917), and Girdle Books (1920).

Larsen’s approach was one of assembling and comparing early texts, and his privileged position as university librarian gave him wide access to literature. It was the texts documenting early methods of making gold thread that Karen found most interesting, and that she presented in translation in her lecture. The earliest reference is to the method for making pure gold lamella found in an 8th century Latin document discovered in Lucca by Ludovico Muratori. Here, although Karen was translating into English Larsen’s translation of Latin into Danish, her understanding of techniques enabled her to preserve the sense of the original. Karen brought to all her work the “maker’s mind”.

Pure gold lamella spun onto a core of yellow silk for embroidery and weaving played a sizeable role in the medieval Italian export trade, but pure gold was eventually supplanted by gilded silver lamella. Larsen found the technique for gilded lamella described in the Pirotechnia of 1540 by Vanoccio Biringuccio, and in the Essay des Merveilles de Nature of 1632 by Etienne Binet. This technique involved not only gilding but wiredrawing. According to Biringuccio, the secrets of wiredrawing were well known by the middle of the sixteenth century. Karen’s lecture explains how this proceeded in three stages from coarse pulling, to the pulling table, to winding between drawplates. In the 1559 edition of Biringuccio, these three phases are illustrated. And we can observe in illustrations by Lejisugo in 1744, and Johannes Halle in 1761 and little difference from the earlier method.

But round wire reflects relatively little light; to match beaten gold in lustre, it has to be flattened first. Although flattened gold wire, known as Cyprian gold, was noted in the early 16th century by the Swedish embroiderer Lambertus, who described it as being “gold under and over,” documentation of the technique is not found until the 18th century. Halle shows the roller press used, and although the concept is simple, he explains how every aspect of the work required enormous care by the operator. The rollers had to be polished to a mirror finish, and it was essential to stop the flattening process whenever the rollers began to heat up.

There is not time today to cover the remainder of the techniques described in Karen’s article, most notably the delicate process of the spinning of gilt lamella around a silk core employing a thimble cut with lateral grooves. Gold threads made from gilded membrane and gilded paper are also covered. The point we wish to make here is that on the website, you now not only have access to Karen’s translation, but in the endnotes, we have put the links to the original historical texts so you can move freely back and forth between the historical texts and images and the English translation.

Karen’s study of gold thread was led by an interest in how it was made. Understanding from the maker’s point of view was then able to illuminate aspects of historical language that at first seemed obscure. We can see that Lambertus’s “gold under and over” cannot be gilt lamella simply hammered and cut into strips which would be gold on one side only, but rather involves a wire-drawing and then a flattening process. Such understandings then could lead to recognition through close observation of historical objects, learning to distinguish between, say, Ounce gold and Cyprus gold. Basically, this methodology is what we would nowadays call practice-based research. Karen was teaching practice-based research techniques from at least the 1970s, struggling to make people see that you could do research with your hands. But that, as Karen ends her lecture, is another story.