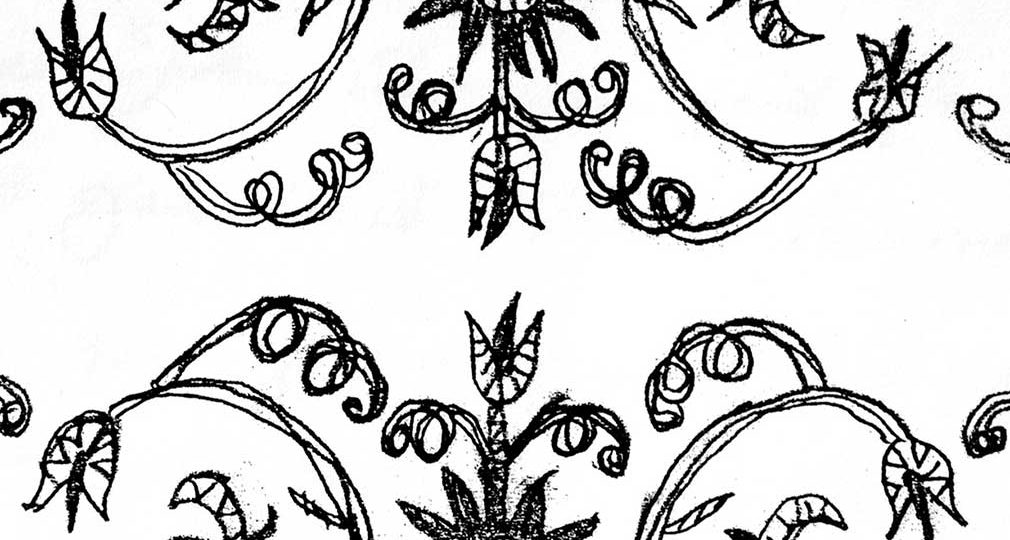 The continuing riddle of the embroidered apron 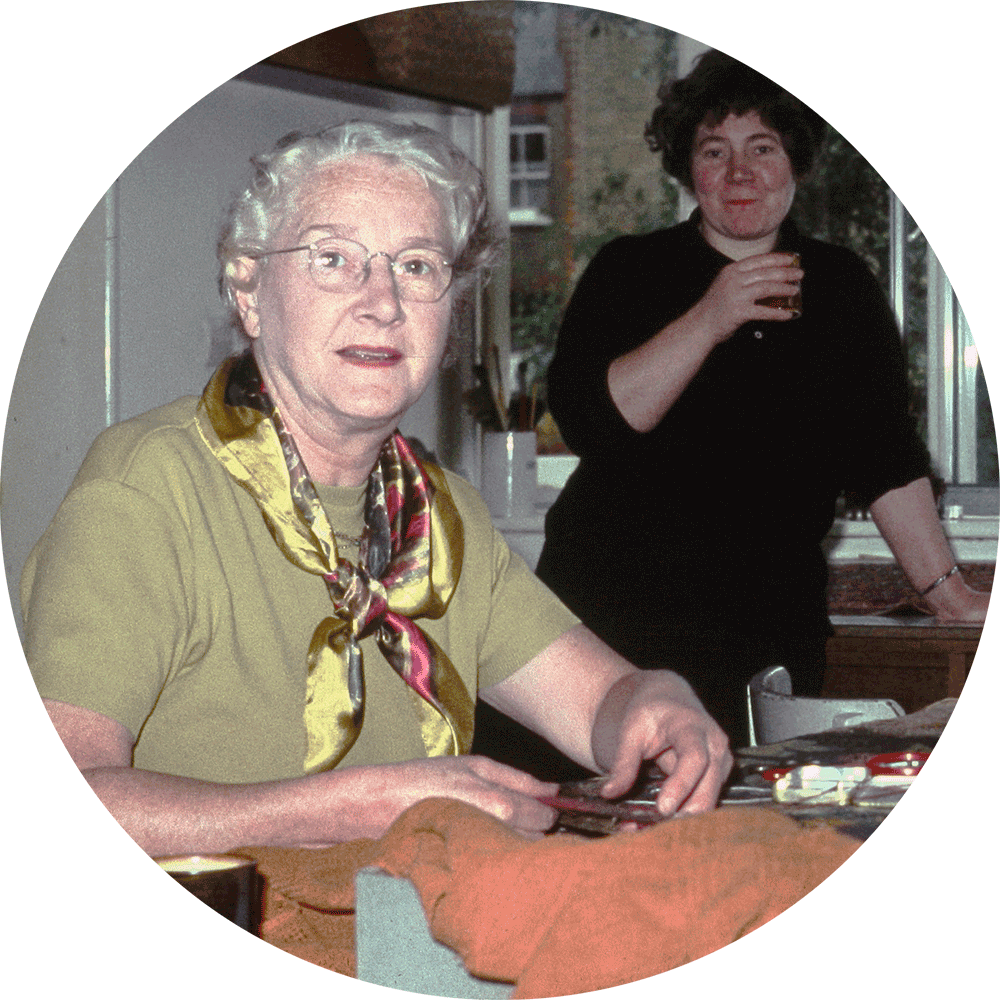 Genitha Yolande Halsey (born Croydon 1904, died Cambridge 1997) had a successful career acting on radio, stage and screen before joining Karen’s workroom in Acton, then continuing at Ealing. Her father Ernest Halsey (1876-1939), stationer and journalist, married Marian Page (1874-1947) in 1902; Genitha was their only child.

I just came across this letter from Karen, and was struck at once—not only by the network of scholars that she could effortlessly link together across geographies and generations—but by her long memory for objects and the questions they pose for us. Karen was given an unusual embroidered apron by Genitha Halsey around 1970, presented a conference paper on it in 1994, and was now soliciting more information in 2007 stimulated by a journal article on historical aprons. How enticing such slow research and the complex meanings it entails. Strange and distinctive embroideries may point here to a story of organisations run for exiles, or ‘immigrant women’s work in a black economy’.

Do you remember the gold embroidered apron that Genny (Genitha) Halsey gave to me and I passed on to the TCC?

I gave a paper about it, and the one with the pierced design, at the 1994 Nordic Textile Symposium in Oslo. Lone Egeberg has since translated a shortened version for “Tenen” and now the other editor Hanne Frøsig Dalgaard has written a general historic outline of aprons. She has included a photo of an embroidered apron at Platt Hall with a similar scalloped lower edge, but finished with a double buttonhole stitch, that is not related to the rest of the embroidery, which is quite stylised and looks very nearly as foreign [non-British] as Genny’s apron.

I now wonder if that apron too could have been refugee work, as John Nevinson said: “for vending at Street Markets”? Do you think Miles [Lambert] knows about this? I include the part of my paper that deals with Genny’s apron. Is there any research on this subject? Hanne wrote that there are few, if any, aprons of this sort in Denmark, and now I wonder about how many there are here—and about their depictions in paintings?

In about 1970, I was given two 18th century aprons. They came with next to no information about their origin and production. Perhaps, by describing them in this paper, they may be put in context with any similar pieces elsewhere. Clues may then appear that will answer some of the questions posed by their existence.

The oldest of the two aprons is of a type that was fashionable in the early 18th century. It was given to me by a close associate in whose family it has been passed down, though she did not know for how long. She considered that it would have been acquired at a time when the wearing of such aprons was going out of fashion and this it would have been kept because of the goldwork embroidery. 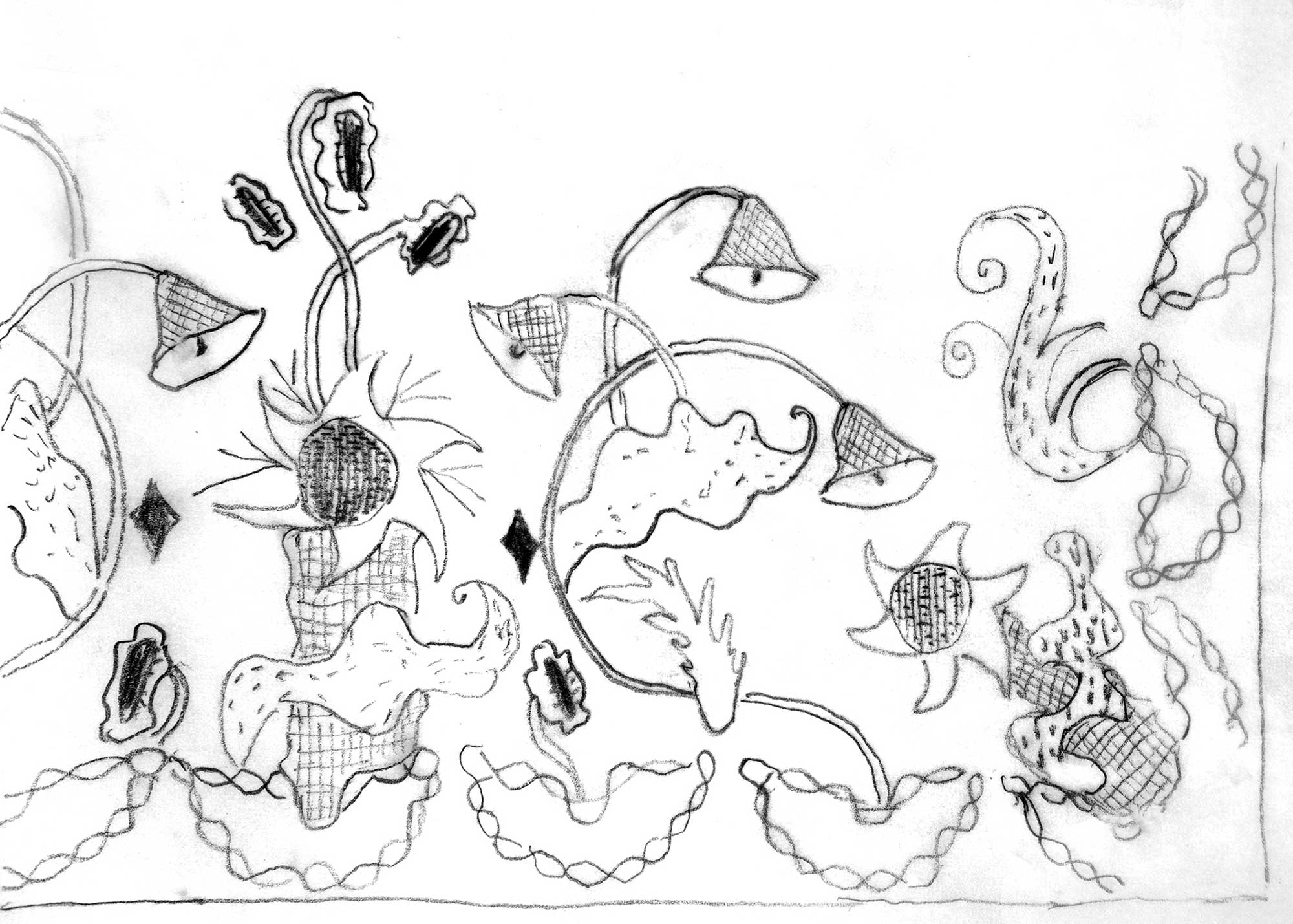 Tracing of the apron design taken from a photocopied image

This assumption was based on the fact that the apron had not been made up but had been framed in the manner of a picture with the top part turned under to show only the embroidery. A further indication was the coarse tow thread—still attached—that had been used for stitching the silk taffeta to the webbing nailed along the two cylinders of an embroidery frame. Since these had not been removed by the embroiderer, it could be that the embroidery of aprons as fashion accessories was no longer lucrative enough to spend any unnecessary time on their presentation for sale.

The piece is 89 cms long (35 inches) by 50 cms wide (19¾ inches) with green and pink selvages. The embroidery design of stars and bell-shaped flowers with abstract leaf shapes set in a scalloped border is worked with silver-gilt thread of several qualities. There are no signs of an underlying drawing to guide the embroiderer.

The goldwork technique used for the stars and the bell shapes is executed with good craftsmanship and is similar to the type of goldwork seen on European ceremonial garments at the time, including modified satin stitch firmly raised over card and precise couching with yellow silk crisscrossed at the back to give hard outlines. The centre of the stars is worked with “rough” and “smooth” silver gilt thread over string to give a basket or waffle appearance. The leaves and scallops are quite obviously worked by other hands with little skill, the laid and couched metal threads meander around the bizarre leaf shapes with no apparent understanding of either design or technique.

Christening cloth made from two aprons 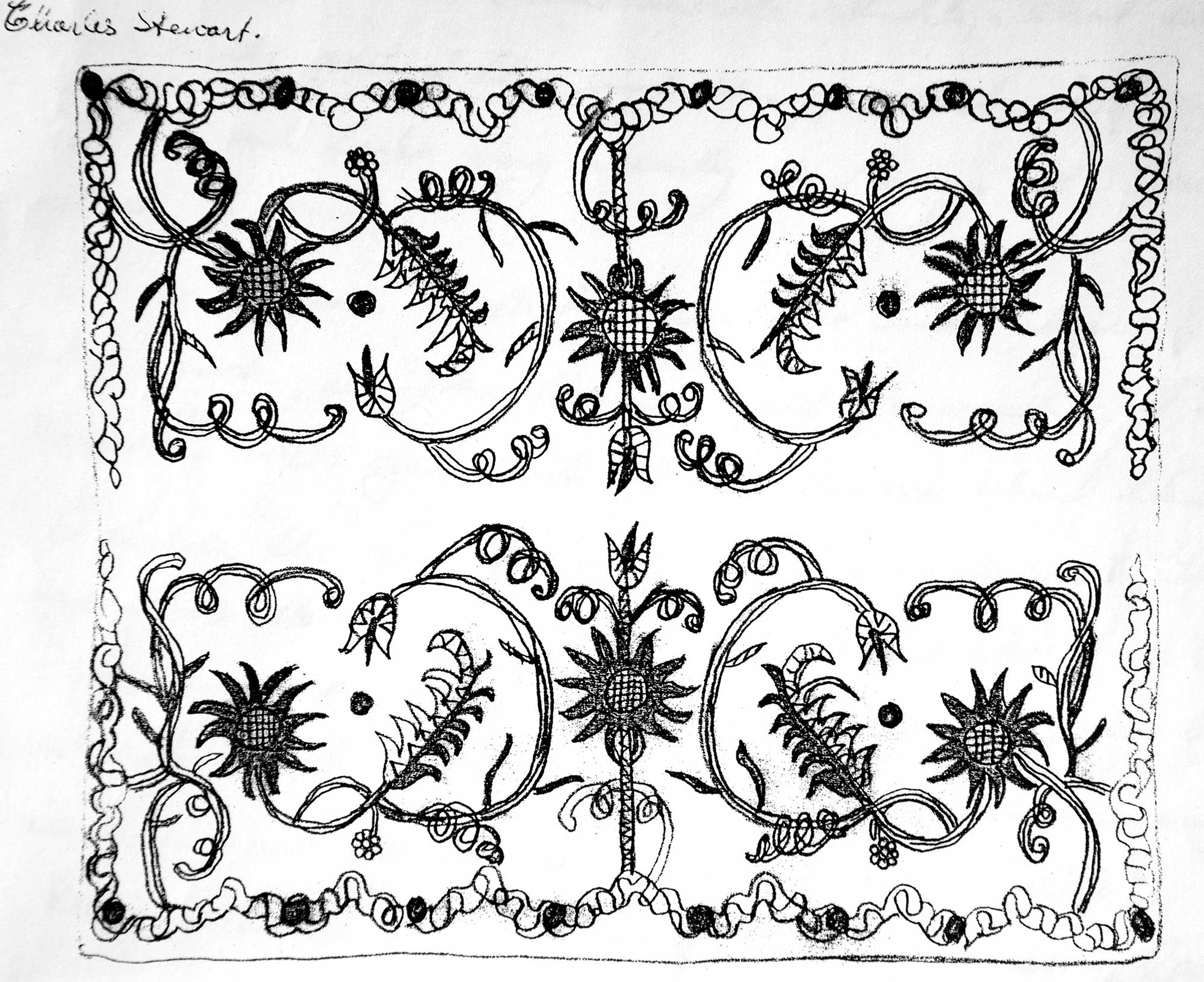 By a strange coincidence, a pair of embroideries with similar design and workmanship—or lack of it—came to my workroom for conservation. They had been joined to form a Christening cloth with a yellow silk lining. The cloth belonged to Charles Stewart who later gave his collection to the Royal Scottish Museum, together with Shambellie, his ancestral home near Dumfries.

During a visit to my workroom by the textile historian, John Nevinson, I showed him these embroideries and we discussed their similarities. I learned about the possibility that they had been worked by ladies who had come to England with their families to escape religious persecution and who had—perhaps for the first time—been obliged to work for their living, They might make their embroidery skills profitable, but marketing would be seen as unladylike and to be left to husbands and sons.

In the early 18th century, fine embroidered silk aprons were likely to be saleable items at street markets, but whether these particular aprons were produced by individual enterprise or by outworkers in a black economy remains uncertain. Since this type of apron had to be cut to fit at the waist and over the folds of fashionable dress, they would have to be completed by the purchaser—who, as seen here, might put embroidery intended for aprons to a totally different purpose.

Subsequent study of 18th century aprons confirmed both the differences and the similarities in a manner consistent with the embroideries being the products of a home industry using any skills available and intended for vending at street markets. It is difficult to imagine that a person who had learnt to do goldwork to the standards of the star designs could have worked the amateurish tracery of the leaves and scallops. I feel certain that two people must have worked these pieces, one after the other. Completion could include cutting around the scallops which would then be very simply finished using stitches and materials not found in the main embroidery. Lengthening an apron was usually done by attaching a length of metal lace.

The similarity of design and execution of the first apron embroidery to the two making up the Christening cloth suggest that some kind of muster and control would have been involved, but does not tell whether the aprons were embroidered by an organisation run for exiles or whether they were produced as part of a general outwork system.

Traditionally, immigrant women’s work in a black economy has been tied up with securing a foothold for their families in a new country. Few records were kept of any transaction, therefore it may only be surviving letters that will eventually help to solve the riddle of the origin of these embroideries.