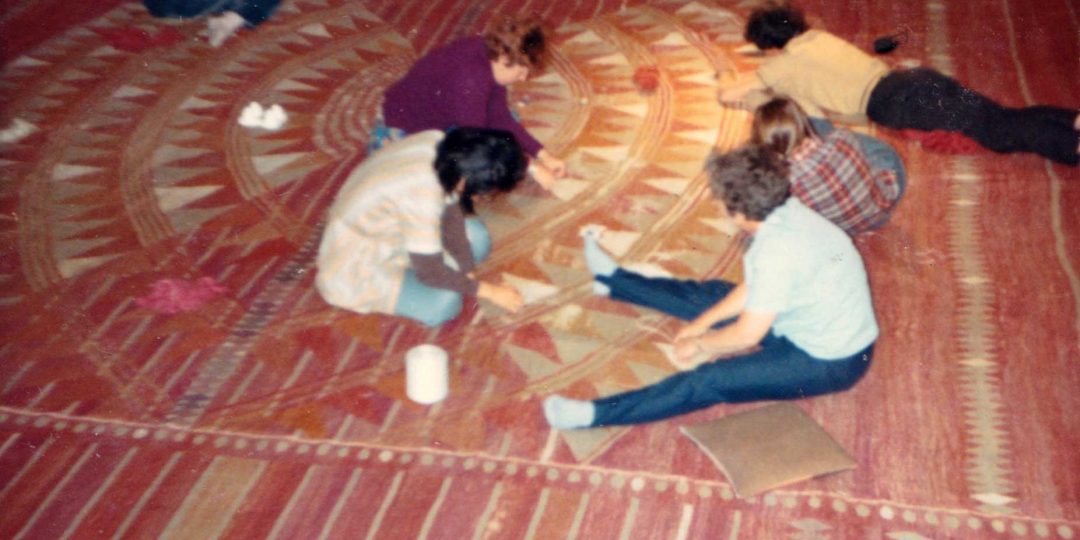 Karen discusses the United Nations curtain restoration, which she led during the summer of 1968 in Sweden 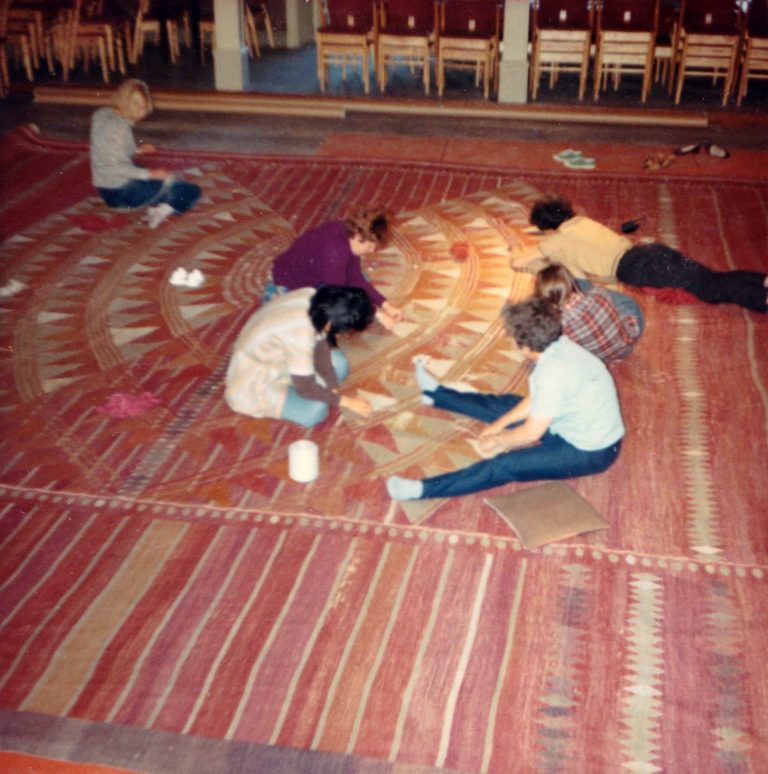 Can you think of any other sort of stories of people or yourself that might be of interest?

Well, do you know about when we did the United Nations curtains?

They had been woven in Sweden as a gift by the Swedish government to the United Nations.

I think I’ve seen them in New York.

You may have. Well they began to fall to pieces, we were told, about a year after they were put up. Wool and linen combined. It shouldn’t have happened. Ten years after they’d been finished they were taken back to Sweden. I think that everybody thought that in some way, the manufacturer came into it. We had a Swedish student working with us then, and she suggested that I should be asked to go to Sweden and think of what could be wrong. And I did. This was in the workrooms of Märta Måås‐Fjetterström, and they were run by Barbro Nilsson.

It is, yes. And it was quite clear to me, knowing about the workshop the way that I did, that there could never be any question of them having caused damage of that order. So it had to be something else. Anyway, I arrived in Sweden to stay in the most marvellous house, called Nordhem on the coast, near the coast.

On the west coast?

Yes, near the workroom. With Eva-Louise and her mother, who now lives in England, both of them.

Svensson, she was. She’s now Eva‐Louise Pepperall. And she was the one who put together the courses that Stephen Cousens and Caroline Clark were trained at in tapestry weaving at West Dean College. I’ll tell you about that afterward. Anyway, to come back to the thing in Sweden. So I went to this beautiful beautiful house and they had spread the tapestry out for me to look at. And it’s very big. Two curtains. Seven metres by fifteen metres each.

And these were done in tapestry technique?

Yes. They were quite quite beautiful, even in the sad state they were in, they were still very beautiful.

They were just simply falling apart, everywhere. Not just one colour.

Not just the warp, the weft also? 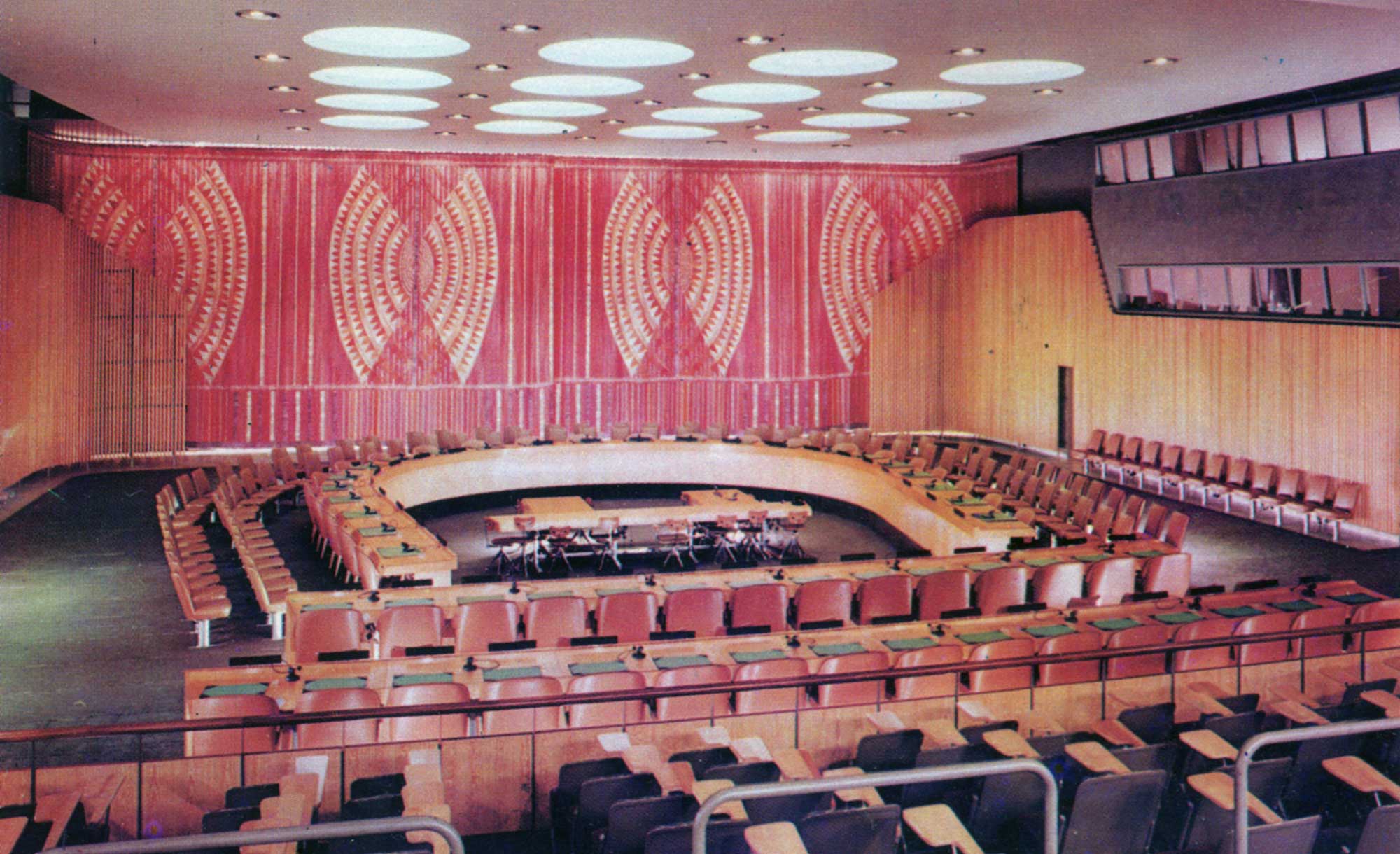 Yes but in particular, the wool. And in order to touch it at all I had to get close to it, of course, and it was so big I had to crawl on it to get onto it. And it didn’t take more than a few minutes before big red bumps came out on my arms. I’m not very susceptible to that kind of thing, so that was a bit strange. So I thought it has to be something… it has to be a chemical reaction or something. I suggested that we get it tested by the Swedish Textile Research Department – I think it’s a government organisation. And at the National Gallery, where Joyce Pleisters tested it. The pH was below one. So why? Why would that be? And the answer came practically immediately. All textiles hung in public buildings in New York must be flameproofed. And works of art appeared not to be exempted. I got mad about this and said “why didn’t anybody find out that wool does not need flameproofing because it can’t sustain burning?” Ah, it’s stupid, you know, I mean those things are not handled by people who know their… it’s a clerk somewhere, I suppose, who’s given the job, and calls in a firm who does flameproofing for theatres or something like that. And that is what had happened. I put together, in my rage and impotence, I put together an article for Studies [in Conservation, the IIC journal] and sent it to Garry Thompson who was then the editor of Studies and he was on the phone immediately on receipt and said “we can’t do that, we’ll be sued”. I said “I haven’t said anything but the truth”. And he said “no, but that doesn’t really matter, if it’s true or not. Would you like me to rewrite it?” I said yes, and then he did. And then a little piece appeared just so that people’s attention could be drawn to the fact that flameproofing might not be the best treatment for any textile of cultural importance, or historic importance. That was one thing, so this was discovered. The next thing was trying to do something about it. 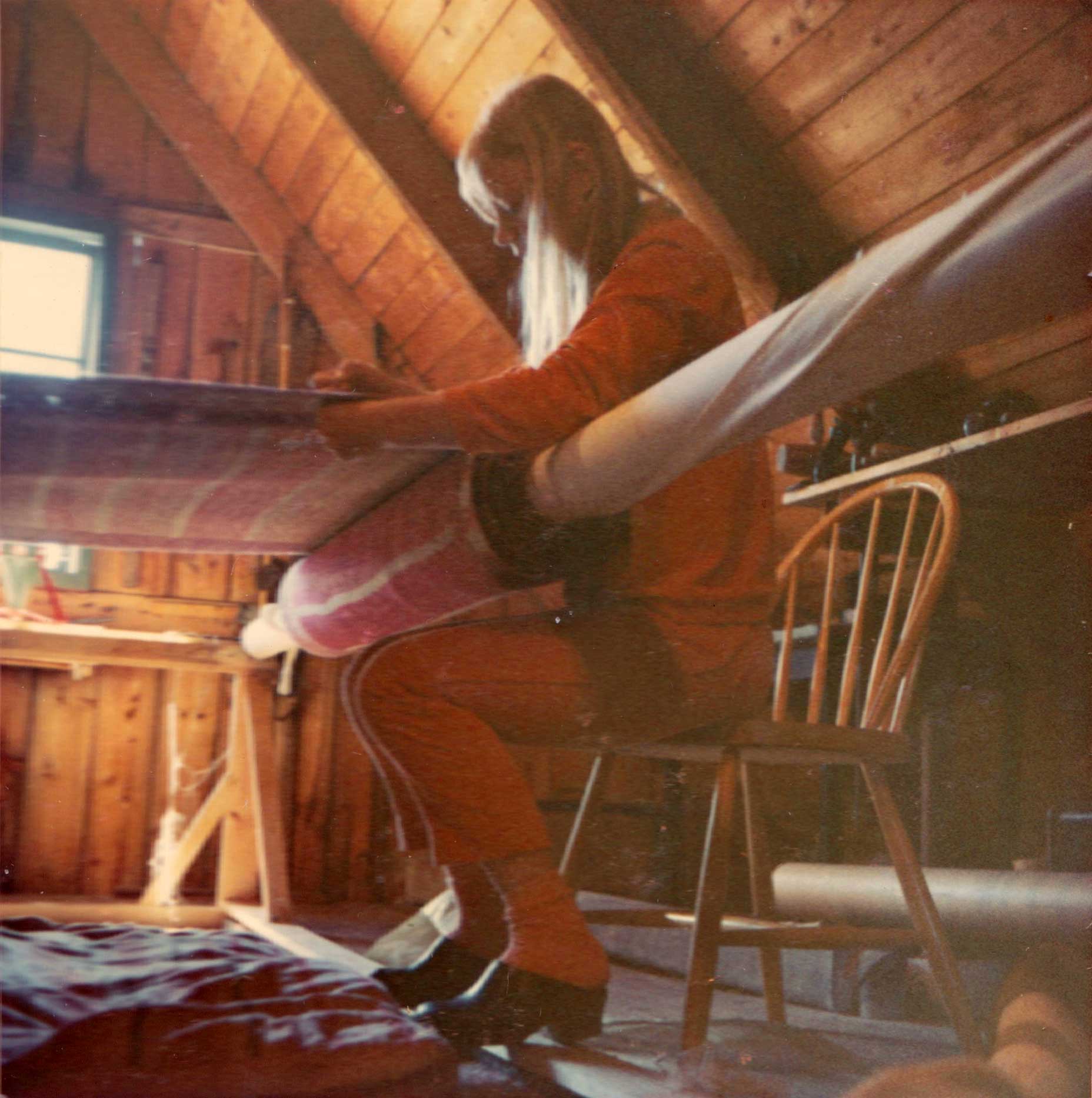 Working on the curtain in the loft space

There was some money made available by the Swedish government for this, and Eva-Louise and her mother and I put together a sort of operation to save the tapestries, which involved doing the work in this beautiful house in Nordhem and the gardens and everything, and getting people from everywhere to come and work on it. So we began by washing it. It was in June and it was raining. And we had to get the water from the well, and it was very very cold, and the only way that we could deal with it was making a large bath on the lawn. And then we had to try to neutralise the acid before anything else at all. We did that by rubbing in an enormous amount of bicarbonate of soda and then swilling that out as fast as you can, really having a lot of water in preparation. And I’m glad to say that we got it to neutral after the first introduction to cleaning. We then washed it and it was dried. And the people who helped with that came from India, South Africa, Holland, England and America. We’ve always had American students I’m glad to say (laughs). The next thing was getting together on finding a way of doing the repair. We decided there to use resin-coated net because we had a frame made for the tapestry in the loft of the farmhouse.

It had been woven in two parts – they had both been woven in two parts and we were able to take them apart to do this. The thing was that we could only put this net on in sections, overlapping sections we thought, and then do it as we went along, in order to have something to secure the tapestry onto. It took three months to do that by a team from absolutely all over the world, and now including a Japanese student. Did I say South Africa? Yes, and from South Africa. Japanese, South Africa.

Were they supplied by the United Nations (laughs)? 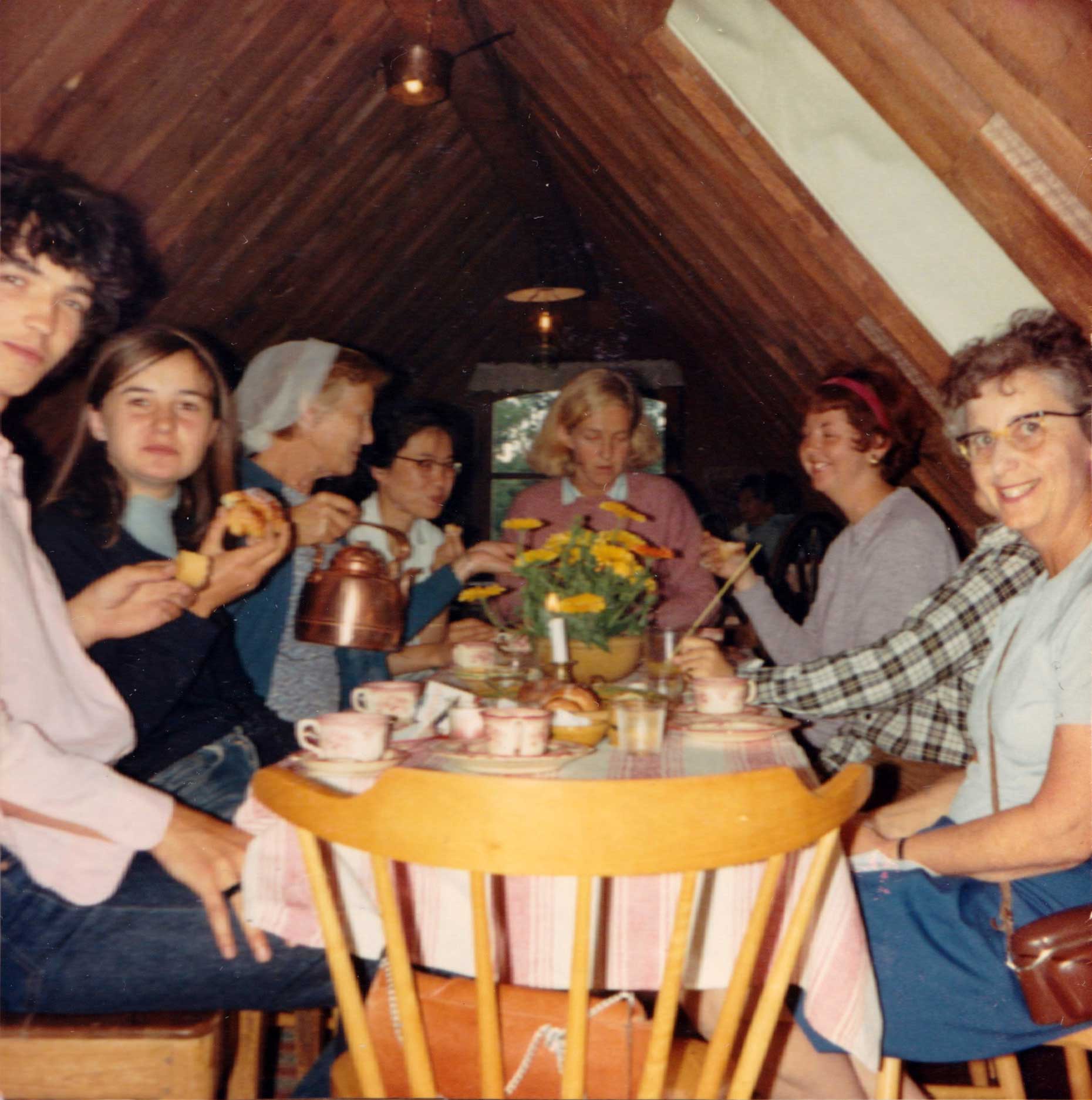 Tea time in the attic

No, it was students who had worked with me over the years, all of them. Except for the Indian boy. He was a colleague from art school, a fellow student from art school – from Eva-Louise’s art school in Stockholm. But otherwise they had worked with me before, so they all knew what it was about. And were willing to pitch in and do everything. We got up in the morning at five o’clock and worked for four hours. Spent the middle of the day on the beach, and then another stint later in the day. And Eva-Louise’s mother did all the cooking and it was fantastic. It was, you know, a really amazing experience.

How long did this take?

It took the whole of the summer. Unfortunately of course it changed the dimensions of the tapestry.

The washing or the netting or all of it?

And the fire retardant, probably.

Yes. I mean all of it helped. So I believe that they are now a little bit too short for the windows. We suggested they shouldn’t hang them at the windows anymore, but that didn’t…

They are still hanging there, are they?

Yes. I believe so.

And what year was this? Do you remember?

The team repairing the UN curtain in the loft space

Yes, that was in 1968, because that was when we moved into our new house in Ealing to get more room for the work. Oh, the Indian boy, at night he would be telling our fortunes. Of course we had great parties. It was wonderful. And when it was finished we had to line it, and this time we really had to have it out flat – each one of them, seven metres by fifteen. And the only place that could be done was in the bottom of the swimming pool in the nearby town, which was emptied especially for our purposes. And the townspeople came in and stood round the swimming pool looking down at us.

Why the swimming pool?

It was a question of getting space that was large enough.

That was enclosed, yes.

I see. Are there pictures from this?

Yes, we’ve got some quite good ones. All the girls were in bikinis, of course. There’s one that includes Eva-Louise and Rinske from Holland, who now lives in Australia, and Naoko from Japan. And another one with Susan and Mick who had been working with me for an awful long time in Ealing.

Yes, that’s right. And she was [inaudible]. All were good, marvellous company. It was great fun, and of course all of us staying there and sharing the bedrooms and outhouses. And Eva-Louise’s mother had had one of the outhouses specially made into a guest apartment for us too.

Oh, it was, it was. I think it was worth doing, even thought the condition is really [inaudible]. They won’t last very long.

Do you think that the washing actually removed the fire retardant?