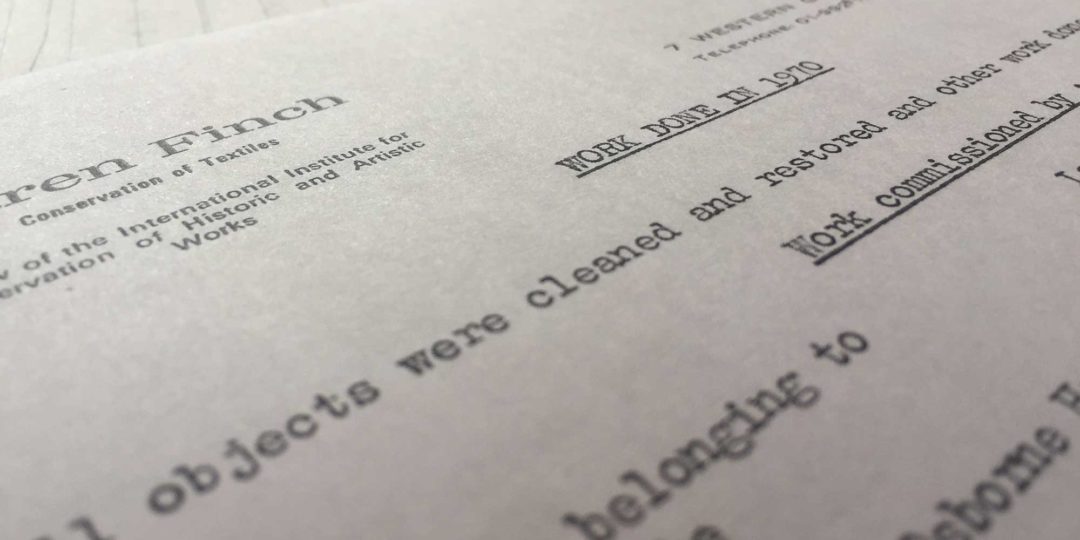 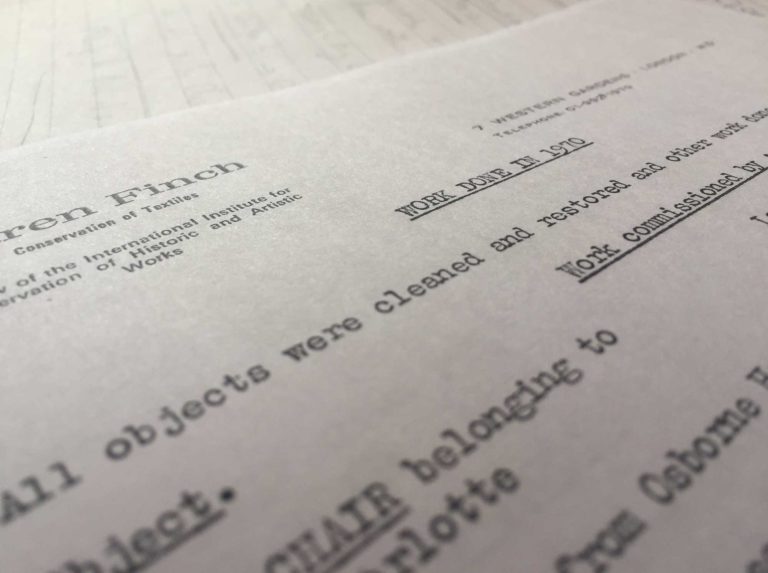 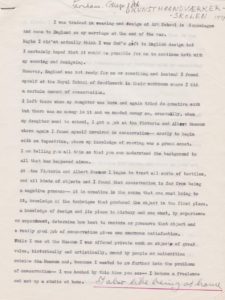 I was trained in weaving and design at Art School in Copenhagen and came to England on my marriage at the end of the war. Maybe I didn’t actually think I was God’s gift to English design but I certainly hoped that it would be possible for me to continue both with my weaving and designing.

However, England was not ready for me or something and instead I found myself at the Royal School of Needlework in their workroom where I did a certain amount of conservation.

I left there when my daughter was born and again tried do creative work but there was no money in it and we needed money so, eventually, when my daughter went to school, I got a job at the Victoria and Albert Museum where again I found myself involved in conservation – mostly to begin with on tapestries, where my knowledge of weaving was a great asset. I am telling you all this so that you can understand the background to all that has happened since.

At the Victoria and Albert Museum I began to treat all sorts of textiles, and all kinds of objects and I found that conservation is far from being a negative process – it is creative in the sense that one must bring to it, knowledge of the technique that produced the object in the first place, a knowledge of design and its place in history and one must, by experience or experiment, determine how best to restore or preserve that object and a really good job of conservation gives one enormous satisfaction.

While I was at the museum I was offered private work on objects of great value, historically and artistically, owned by people or authorities outside the museum and, because I wanted to go further into the problems of conservation – I was hooked by this time you see – I became a freelance and set up a studio at home.

At first, I worked alone but, very soon afterwards, I found that so much work kept coming in that I had to have help and from then on the whole thing snowballed until now we are in the position where I must stop working as a private individual and we are therefore trying to set up a National Centre for the Conservation of Textiles with an associated training school. This, I hope, will come into being and continue the work we have started. “Continue” is important because I feel that what we have been doing is right.

All our work has been done to the highest professional standards and this must be maintained. Where we could improve if we had the additional facilities in such a Centre would be in research both chemical and historical, documentation both written and photographic, recording the work done, and the history of the object so that there is a permanent record for the future. We need much more space than we have now, we should be able to provide an information service for anyone who cares to come and we need a permanent, salaried staff and facilities for training.

Let me tell you how we work now. My studios are on the ground floor of my home, we have moved house once to get more space but work still tends to spread out into all available rooms.

All my helpers are self-employed and are paid for their work when the account for the work is paid for by the client. We started this system because I had no capital and there are points both for and against it. In its favour is the fact that a worker has an incentive to press on and get a job finished and be paid for it and, in the case of a really long job – repairing a tapestry recently took over 3,000 working hours – this is a help. But, on the other hand, as self-employed persons, my helpers can take time off whenever they like. This is a big advantage for the working mother with a child who may be home for holidays or sickness, but it is somewhat less of an advantage when one is trying to organise space and time for work. It could be that all the workers are away at the same time, but overheads still have to be paid even though no work is being done or, on the other hand, everyone could turn up one day resulting in difficulties in finding space for all to work comfortably.

There has been a growing awareness of the meaning of conservation amongst the general public. We realised that unless something was done quickly, no future generation would be able to see many of the wild animals we have taken for granted for so long. Then the conservationists moved to plants, and then to buildings and they are gradually reaching textiles.

All jobs are estimated for by the worker who will do it and myself and we decide how many hours it should take to do by whatever method we feel will be best. The number of hours is then multiplied by a fixed sum of money which covers payment to the worker and overheads (heat, light etc in the studio and normal materials used). Materials which have to be bought especially for a particular job, such as linings, are charged for separately.

What we cannot at present charge for, is the time and money spent in research, documentation, photography, consultations at the studio and what can be loosely described as public relations.

What I would like to see in a Centre would be a nucleus of salaried workers, working full-time and a pool of self-employed workers brought in to do specific jobs on the same sort of self-employed basis we have now. I think we could overcome the difficulties of planning by each worker, at the start of a job, promising to do a minimum of X hours per week. In any case, more space would help the planning because work could safely be left in position and not, as now, have to be brought out and put away as the worker comes and goes.

Perhaps as important as the better working conditions we could have in a centre would be the facilities for training. Students have come to me from literally all over the world because there was no other way they could get the tuition they needed. I could give no set syllabus or course of study and no diploma at the end of their stay, nevertheless they were willing to come and be around and watch and ask questions and go to lectures which I would suggest at the Victoria and Albert Museum and other museums and, eventually, under supervision, they would be allowed to do actual conservation work. It is impossible to teach conservation on ‘samples’. One must work on the real thing. It is also very difficult to know whether a student has that ‘something’ – the feel for the object, a flair for handling a textile and an eye for knowing when a thing looks right, all these are needed in a good conservator but they cannot be assessed in a student until one can see that student actually at work. Of course there is a lot of theory that needs to be taught but conservation is essentially a practical job and success can only be judged by results.

Students who have come to my studio made no payment for their tuition but neither did they receive payment for any work they did there. Students who have spent time with me are now working on conservation in museums or similar institutions all over the world, some are now doing other things. Some stayed on to work with me if they could manage this financially but, sadly, some who needed a regular income – which we could not give – could not afford to stay with us although they would have liked this and have made useful members of the team.

My experience with these students has been very valuable. Up to now I have accepted whoever applied providing it was convenient but when the training scheme comes into operation it will be possible to impose a standard for entry. Certain qualifications are necessary and a good standard of education would ensure that students have intelligence and can learn which would suggest a university degree or comparable Art School Diploma. I would also look for manual skill, a sense of colour and design and a genuine desire to do the work.

The period of formal training would have to be in line with custom because of grants and therefore I suggest 2 years but I would hope that during that time the student would realise that no-one can ever be taught all there is to know – every piece of conservation is unique. Basic rules apply, but each object requires special treatment and what that is to be is not always easy to decide. New techniques are evolved as new chemicals or ways of using them are discovered and new equipment designed.

In all our work we have always kept very strictly to the rule that all conservation should be reversible – in other words, nothing should be done which cannot be undone whether it is stitching or sticking net impregnated with synthetic resin or any other method which might be used. What may today be the only known way to save a precious fabric, may well tomorrow be superseded by a safer, quicker or more visually acceptable method and one must always be prepared that one’s old conservation can in future be undone and replaced by something better.

This is one reason why I feel all work should be thoroughly documented – time and money will be saved if future workers know just what was done, when and with what materials.

Well, I have lost money gaining my experience because I have no business sense and because of the circumstances in which I have worked. During the last few years there has been a growing awareness of the meaning of conservation amongst the general public. It started predictably enough with animals and we were made to realise that unless something was done quickly, no future generation would be able to see many of the wild animals we have taken for granted for so long. Then the conservationists moved – still in the realms of nature – to plants and tracts of countryside, and then to buildings and they are gradually reaching textiles by way of the interest in paintings, antiques, and trips to Great Houses.

This country has such a wealth of beautiful old textiles that, as so often happens when one has plenty, people did not grieve overmuch when some was lost forever. There are growing signs that people do care, money is becoming available and many museums are setting up their own conservation departments for which staff will be required.

I do not think we can hope to train more than about 4 students each year and also continue with the very necessary conservation work in the Centre. Two years after the Centre comes into being, there will be 4 trained people available to accept posts and, thereafter a steady stream. This will, perhaps, not be enough but these same people could themselves train helpers to work under their supervision and in contact with the Centre. What we hope to achieve is proper professional status, adequate salaries or payment for really skilled work in which we have pride and satisfaction and I am hoping that, through the Centre, the work will go on and the conservators of the future will be trained.