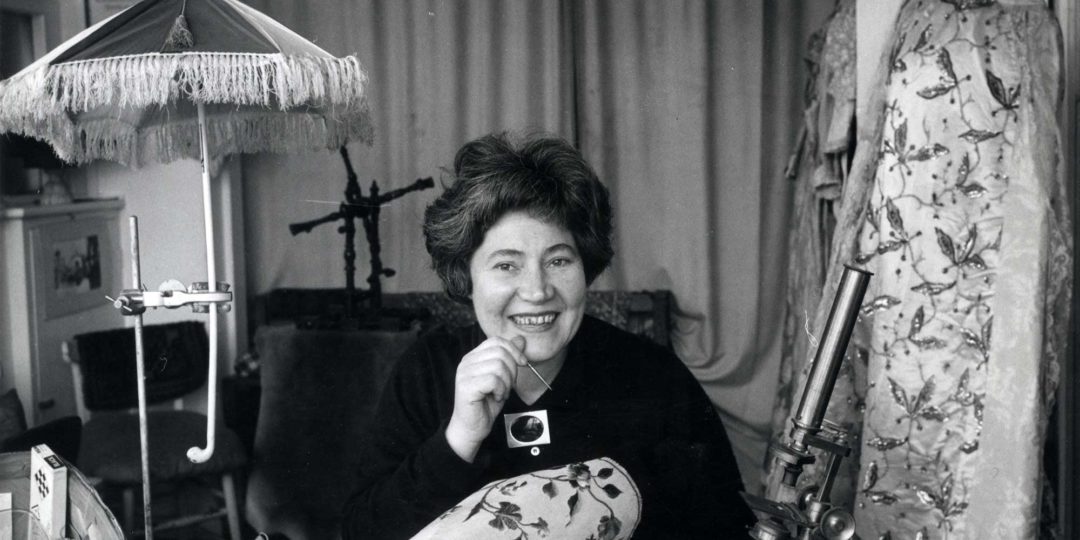 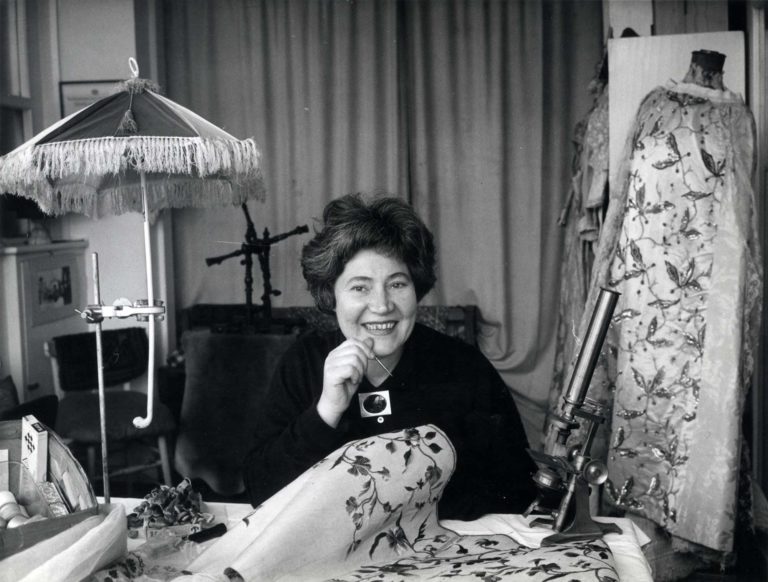 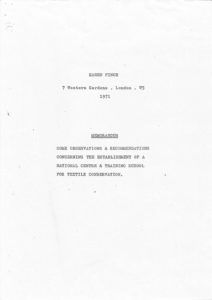 Historic textiles are a part of our national heritage in the same way as painting and other works of art. They are important not only because of their rarity, but also educationally, in that they contribute a unique social comment on the past.

This country has a tradition of textiles and embroidery which is acknowledged all over the world and we still have many beautiful historic and irreplaceable examples, all of which are of great value and interest to historians, students and also the general public, to whom fabrics by virtue of their domestic associations, have an especial appeal.

Textiles by their nature are particularly susceptible to damage from wear, handling and pollution. There are those in Museums which are receiving care, but in Great Houses where they may be seen in their original settings, many suffer neglect, through lack of funds, or someone to give them expert treatment, and now require urgent attention to preserve them for posterity.

That there is a growing concern to save these textiles was apparent when, after some years at the Victoria and Albert Museum, I began, in 1959, to work at home as a conservator. Proof of the need for an independent conservation service was soon forthcoming. Objects came in for restoration in such quantities that, rather than turn them away, I decided to gather together a group of workers, some with varying degrees of experience, and others who were willing to be trained.

We deal with such varied objects as tapestries, costumes and their accessories, domestic and ceremonial embroideries, needle-work pictures, lace, fabrics covering furniture, regimental colours and banners, vestments and church furnishings, and other pieces which are only partly textile, such as state beds, bishop’s thrones, sedan chairs, dolls, etc.

The diversity and quantity of the work available can be seen in the appended list of objects which were treated in my studios in one year – 1970.

As I started my independent studio without capital, a system has been evolved whereby each worker is self-employed, receiving payment on settlement of account for the completed work. Treatment is charged for at a fixed rate per hour to cover both overheads and payment to the person who carries it out. Estimates are arrived at by agreement between myself and the worker as to the number of hours we think the job will take, but in practice this time will always be exceeded, if circumstances so require.

We assess the problems presented by each item which comes in for treatment, doing such research as our limited facilities permit, but we are fortunate in being able to call on the co-operation of our friends at the National Gallery, the Victoria and Albert Museum, and the Central Laboratory in Amsterdam for research we can not do ourselves.

We then decide on the most suitable method of treatment to use. We do not use methods which are irreversible, believing that the first principle of conservation is always to safeguard the possibility of re-treatment, if, at a later date, a newer and better method should be discovered.

Working in a private capacity in this way has always presented difficulties. The lack of capital means that the acquisition of necessary equipment and materials has meant considerable personal financial sacrifices.

Second to lack of capital, the most acute problem is one of space owing to the considerable size of many of the items we receive. It is particularly a problem in regard to the washing of large tapestries but with other jobs too, the necessity to have to improvise creates tiresome delays.

This is also the case when we have to rely on others for the results of research, however willingly and generously the help is given.

We do not use methods which are irreversible, believing that the first principle of conservation is always to safeguard the possibility of re-treatment, if, at a later date, a newer and better method should be discovered.

Nevertheless, all work, from the beginning has always been undertaken on a strictly professional basis and we are concerned to maintain the high standard this demands.

As a Fellow of the International Institute of Conservation of Historic and Artistic Works, I am aware of the official backing and facilities for research which are available in other countries. I have been able to relate the results of some of this research to my work here, but, as different countries have individual climatic and pollution problems, I feel that more research might be done in respect of problems peculiar to this country purely as they affect textiles.

There is evidence of the need for a recognised course for training those who wish to work in textile conservation. I am already giving lectures and demonstrations in my studios to students from the Courtauld Institute who are working for their Master’s Degree.

Ever since I set up on my own I have been approached by students, not only from this country but from all over the world seeking instruction in textile conservation and I have been able to give many such training as our limited facilities and space affords, but there is a real need for a training scheme with a proper syllabus, at the completion of which a recognised diploma or certificate could be awarded.

It is also evident, judging by the requests I receive, that there is an increasing interest in, and demand for, the restoration of textiles from many sources, but, due to my inadequate premises I am obliged to turn much of it away.

Need for a Centre in the South of England

In my opinion, based on twelve years experience as a private conservator, the time has arrived when it is urgent that some authority should give official and financial backing to the establishment in Southern England of a permanent centre for textile conservation, having similar aims to those of the Manchester Centre at Wythenshawe Hall, but with additional facilities for research and training.

The capital expenditure in setting up the Wythenshawe Hall Centre was largely financed by the Carnegie United Kingdom Trust on behalf of the North Western Museum and Art Gallery Service, which is supported voluntarily by Local Authorities.

Requirements of a new Centre

The new centre I have in mind would need to have at least one very large workroom with good daylight and strip lighting, a room with a supply of softened water and a large shallow tank with its own plumbing where really large tapestries could be washed, a laboratory equipped for research with a powerful microscope, sink and dark-room facilities for photographic work, a lecture room where slides could be shown and a reference library housed. Storage room for objects awaiting treatment or collection should be adequate, remembering that even rolled tapestries are bulky and costumes, particularly on dummies, take up a lot of room. It is necessary to hold stocks of materials and locked and well ventilated storage for chemicals is essential. Kitchen and toilet facilities for staff and visitors are also necessary. Above all, there must be adequate security precautions especially at night and at week-ends.

I envisage a salaried staff consisting of a director in general control of the running of the centre, and skilled conservators responsible respectively for tapestries, embroidery including banners etc., costume and small objects. All these qualified people would be capable of training students. It would be necessary to have someone with scientific training for research who might well also be responsible for keeping records of all objects brought in for treatment, both with photographs, sketching and written reports which could prove of great value in the future.

It would be necessary to have a secretary receptionist to deal with the telephone, letters, accounts and payments and it would be essential for her to have enough knowledge of and interest in the work so that she would be able to deal with visiting and telephoning clients. This knowledge could be acquired if she had the right attitude to the aims and objects of the centre.

The permanent personnel of the centre could be supplemented by a reservoir of self-employed people of the kind who work for me now, with special skills who could come in when work was available for them.

Some of the people are mobile and can go and work anywhere in the country if the object for conservation is especially large and there is space for the work to be done in situ. This is especially advantageous where the restoration of large tapestries or state beds is needed.

An incidental task which has arisen in the course of conservation is the surveying and classification of individual textile collections round the country. In doing estimates for the conservation of textiles at great Houses such as Hardwick Hall and Knole Park, we have compiled surveys of their collections, including their condition and needs for restoration. This important work could, with profit to the knowledge of this country’s historic textiles, be undertaken on a systematic basis.

The training of students should receive official recognition and therefore qualify for grants from local authorities. Theoretical and practical instruction over a minimum of a two year course for students who already have art-school or similar training, could result in a recognised certificate or diploma which would enable successful students to obtain properly paid work in textile conservation either in this country or abroad.

A national centre would attract sufficient work to give students experience by training, under supervision on actual objects, or watching the expert work of conservation of many different textile objects.

Since each object presents its own problem it would never be possible to ensure that every possible aspect of the work was covered in two years, but a careful syllabus would arrange that as many omissions as possible could be filled by a selection of test pieces to enable the student to gain as much practical experience in as many ways as possible.

Location of the Centre

Ideally the centre should be set up in London both for ease of access for students, staff and clients and also so that students may be able to avail themselves of the facilities for study, research and lectures offered by the Museums, particularly the Victoria and Albert Museum. 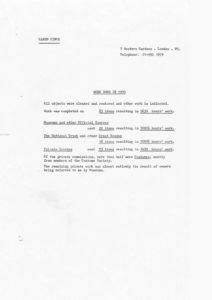