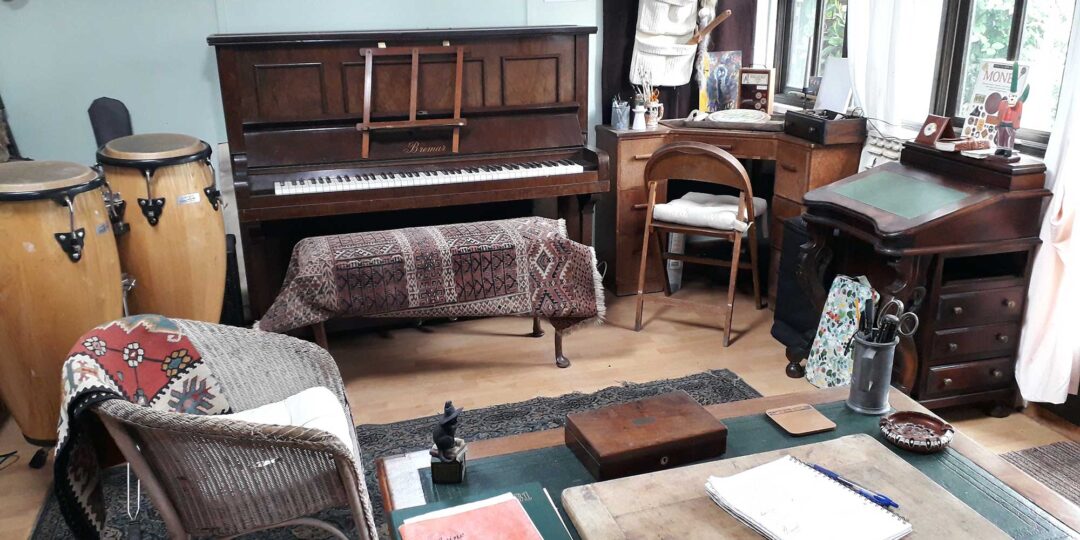 “A little bit adventurous”: a few of Karen’s early memories 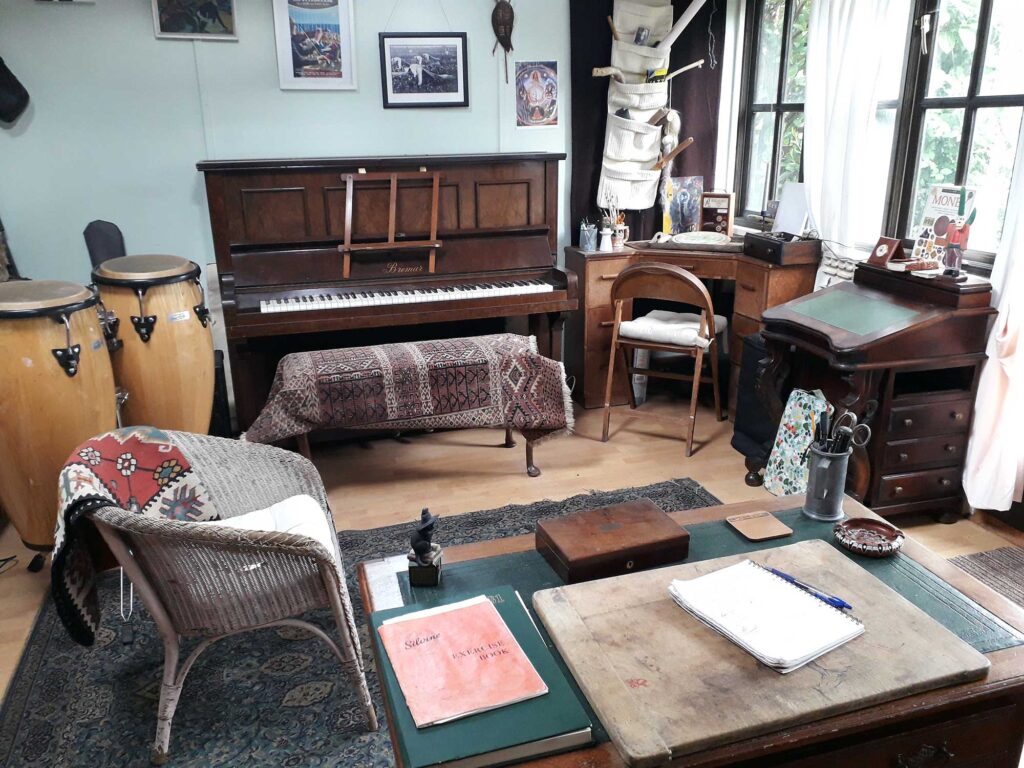 When Karen came to live with us in Bisterne Avenue in 2004, she was still fairly mobile despite very severe arthritic pains in her back and hips. In those early days, it was not unknown for her to pick up her crutches and walk on her own round the block – no mean enterprise considering that we live at the top of a rather steep hill. But her favourite position was in her wheelchair in front of the TV, although it was not on all the time, and for quite a few years she carried on sorting her papers, writing and translating. But she increasingly needed persuasion to go out, and I was usually the one who took on the job of “giving her an airing”. Initially, she was able to walk as far as the local church, St Peters-in-the-Forest, and even to complete a small circuit through the nearest part of the forest, past the pond to see the ducks, and back down the little alley that leads from the woods to our street.

Over time, the walks got shorter and we aimed no further than reaching the corner where Bisterne Avenue begins to descend very sharply, sitting on the wall of one of the houses, and then heading home. But she was always happy to be taken out in the wheelchair: sometimes to the cemetery of the church; sometimes to Bisterne Avenue Park where she would contentedly watch the children playing; sometimes as far as the shops in Wood Street or Lamb’s Café at the top of Lea Bridge Road, near Whipps Cross roundabout. When we arrived there on one occasion, two or three burly builders immediately rose from their seats and cleared the way for the wheelchair to a table in the yard, where we both enjoyed a very full fry up. If we had gone down the hill to Wood Street, on our return journey Karen would bravely get out of the chair at the most difficult part of the hill and walk on crutches till we reached the top. She was particularly intrigued by one of the houses on Upper Walthamstow Road, which still has an external door above what had been a stable, no doubt for supplying the horses with hay. She was always impressed by the fact that in Walthamstow you are never far from signs of its long history.

Towards the end of her life, we were doing well if Karen could reach the little house at the back of our garden, which is home to the piano and other musical instruments, a small collection of writing desks, archives and assorted bric-a-brac. Karen always enjoyed sitting in there, and would sometimes begin to recall her most distant memories. Sorting through some old notebooks recently, I came across a few pages where Karen had begun writing and I had taken over while she dictated. I reproduce these memories below. I’m not sure that the well on the family farm into which she fell could really have been 70 feet deep, but this was certainly one of those early traumas that stick in the mind for life! And Karen described herself rather accurately when she said that she was “a little bit adventurous” and “wanted to see the world”, an ambition that she certainly fulfilled… 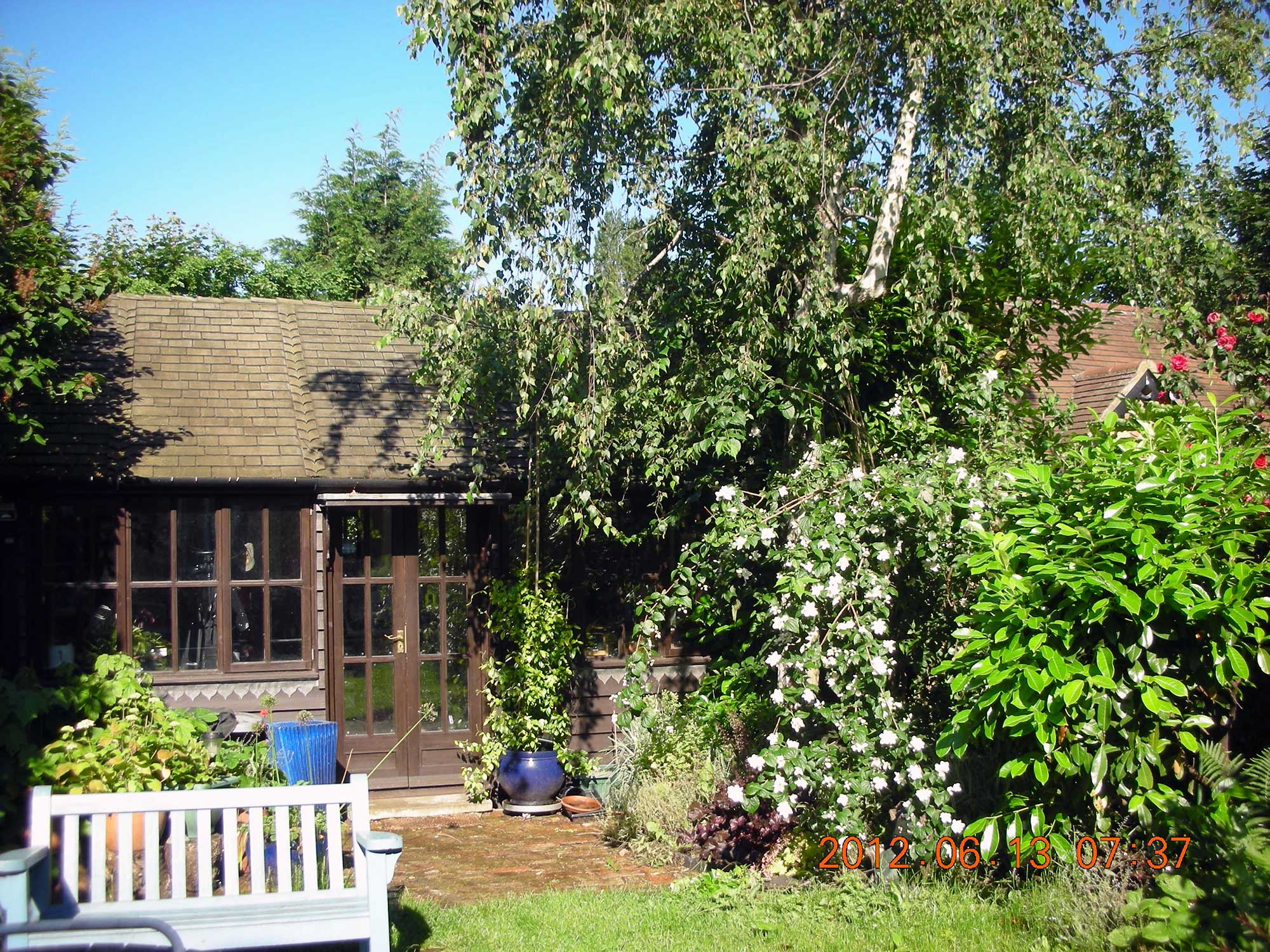 The Garden House at the bottom of the garden at Walthamstow

I was born on Sunday May 8 in 1921 on Meldgaard, number one of eight children. They were Sören, Laurits, Paul, Steen, Grethe, Ruth and Inge.

When Sören was being born (in 1923, so I was very little), I stayed with my mother’s mother in Salling. She had a cockerel, which we were going to eat for Sunday dinner. They cut off its head, so it could not see. It ran round in circles, on and on, and in the end it fell.

I remember our maids practicing the Charleston in front of the mirror in my parents’ bedroom. I was quite fascinated. I remember sitting at the end of the bed. The mirror was in the door of wardrobe. They would dance when my parents were out. They were out a lot. My mother liked to go out. I don’t know where they went.

They didn’t have a gramophone. They probably did a bit of drumming. I don’t think I was more than four or five.

We had two or three maids, who lived in the house, and there was an older married woman who came to help with parties. She had children who sometimes came with her.

I also remember the postman. He was a very nice man who had a uniform with shiny buttons.

I think I must have been a little bit adventurous. Because before we had a pump, I fell into the well. My father was very clever. He tried to climb down to get me but he couldn’t. So they filled the well with water and I floated to the top. I am still a bit adventurous. I am also lucky. That’s because I was born on a Sunday: “Sunday’s child is happy and gay”.

We had some very, very nice maids. I loved them all. When they left and got married and they had children they came to see us with the children. They were always dressed very smart when they came to visit. They wanted to show my mother that she had taught them well.

The well was 70 feet deep. I can remember the stones passing me as I fell. I’m surprised I didn’t break any bones.

I did have a nurse but sometimes she forgot about me. There was a pond on the road that led up to the farm where the horses drank. I wanted to walk on the water and she didn’t stop me till I was half way there. It was the pond where Sören nearly drowned. I screamed until one of the maids came out.

My father was never angry with me. He thought I knew what I was doing and would come home, which I did. It was my mother who got angry with me. I wanted to see the world.