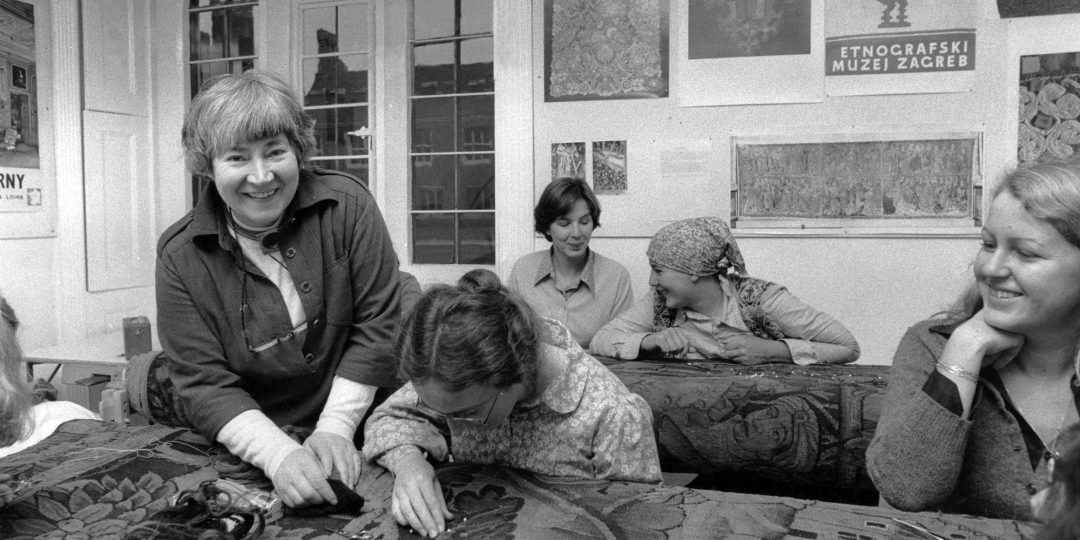 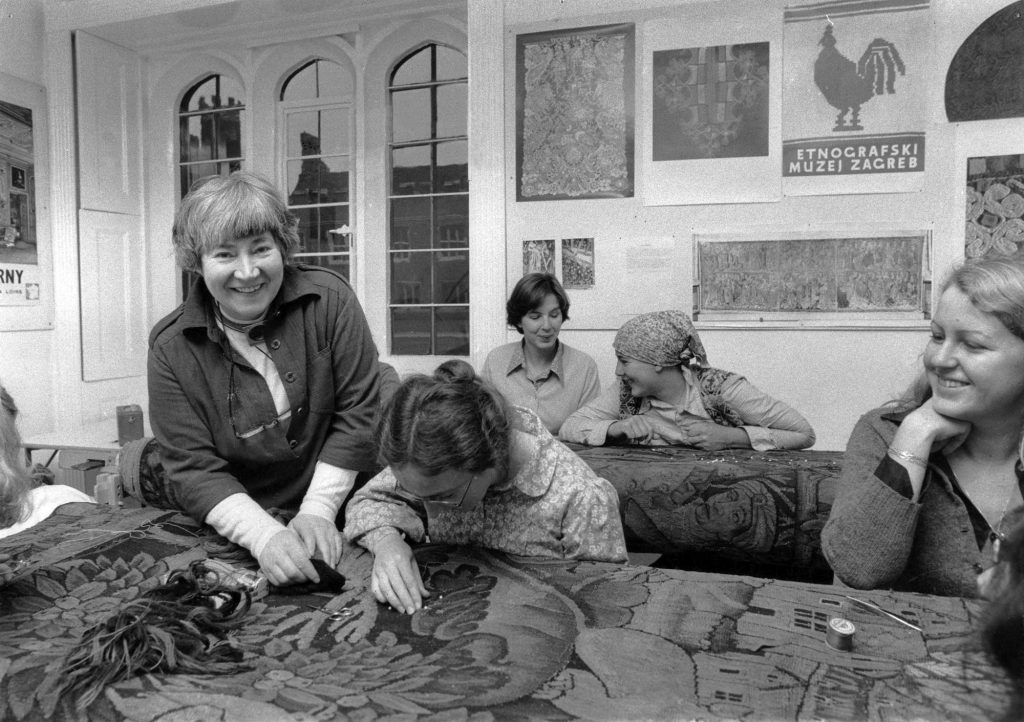 Karen at work at the Textile Conservation Centre at Hampton Court Palace, c. 1975

To mark this year of Karen’s centenary, we begin the publication of the regular lectures which Karen gave as principal of the Textile Conservation Centre in Hampton Court Palace between 1975 and 1986. The introductory lecture, and the Appendices that follow, provide us with a good flavour of Karen’s approach to textile conservation and its teaching. The main sub-headings of the lecture set the tone: history, ethics, and good workroom practice.

Karen was always profoundly aware that the history of textiles was also, to a very considerable extent, the history of humanity, and all her lectures examine the uses and techniques associated with particular materials in their full historical context. For example: the outline of her lecture on linen announces that she will deal with “flax production and the early use of linen in Egypt”; her lecture on spinning would recall “the development of spindles and their relationship with the fibres to be spun”. Similar remarks could be made about the outlines of the other lectures, while term II begins with a lecture on “Foundations of research into textile history”. This historical overview is also connected to a very clear understanding of the environmental and economic circumstances in which different materials were produced. Thus the outline of the lecture on “Lace – Ornamentation and non-woven textile structures” would begin with the consideration that “from earliest times the organic development of textile techniques may have developed out of the availability and properties of material objects chosen for decoration and/or protection from the elements”.

As we know from the findings of archaeology and anthropology, “from earliest times”, the capacity to use animal and plant products for protection from the elements was a matter of life and death, while “decoration”, whether of clothes and jewellery, tools or cave walls has also been increasingly understood as a specific mark of humanity and the inner, symbolic life of our species.

Karen’s awareness of these issues must have been a powerful element in her fight against the prejudice that working with textiles was mere “women’s work”, their conservation more or less a hobby for ladies who do that sort of thing. It is quite likely that, from an early age in her native Denmark, she heard the echoes of the ancient Norse culture which must have had a much stronger grasp of the power of weaving, as witness the symbol of the Three Norns, mighty female deities who wove the destiny of the world on their looms.

Since textiles were historical documents, it was evident that they must be conserved in such a way that they could, as much as possible, be “read” in their original form. Hence the “ethics of textile conservation” is embodied in an approach which insists that all work on the objects is reversible, that all unnecessary changes should be avoided, and that the application of harmful materials and substances should be rigorously avoided. For example, in dealing with stains she argues: “If the stain is not removed by the application of a safe method, then leave it. Anything stronger would at best result in damage to the surrounding fibres. Better a stain than a hole and a chain reaction of further damage”.

All this is consistent with Karen’s insistence that conservation is not the same as “restoration”, based on the idea that ancient products could be “improved” by modern ideas and techniques – an approach she shared, incidentally, with William Morris in his rejection of the Victorian craze for “restoring” ancient buildings.

At the same time, Karen was a consistent proponent of the use of science in conservation. To understand the make-up of historic textiles and how best to conserve them, it was essential to know as much as possible about the chemical structure of the textiles and their interaction with the materials used in their conservation. This may seem obvious now, but Karen was considered a bit of a pioneer when she employed professional scientists for the work of the TCC.

It is also apparent from the lecture and from the material in the appendix that Karen stressed the social aspects of the work at the TCC. On the one hand she points out the need for individual and collective responsibility in the management of the work space, for working as efficiently and as tidily as possible. On the other hand, she understood that there was also a need for relaxation and sociable discourse. Apparently tea time at 4, for everyone, was an unwritten rule of the TCC timetable. And while she is meticulous in reminding students that, “according to regulations, playing of radios or other music is not permitted in Royal Parks and Palaces”, her interpretation of this regulation is somewhat elastic: “therefore we are obliged to keep the sound level low enough not to be heard outside”.

A list of the proposed lectures for terms 1 and 2 (unfortunately undated, but probably from 1986) is included in Appendix 2. Taken as a whole, the lectures provide an overview of the relationship of conservation to various materials (silk, wool, cotton, linen, etc) and techniques (weaving, dyeing, painting and printing, etc). Nearly all of these lectures are in Karen’s archive at Glasgow University and we will be able to publish them in the coming year or so. Where possible, we will include some of the slides that Karen used to illustrate the lectures, although a lot more work needs to be done to organise Karen’s slide archive and to coordinate its contents with the lectures.

This introduction has been written by someone who has no other qualification for the task other than being Karen’s son-in-law, but it would be excellent if those who are seriously acquainted with the subject of textile conservation would volunteer to write a few paragraphs of introduction to some of the other topics. We can make copies of the relevant lectures available in advance to those who volunteer to take on this task.