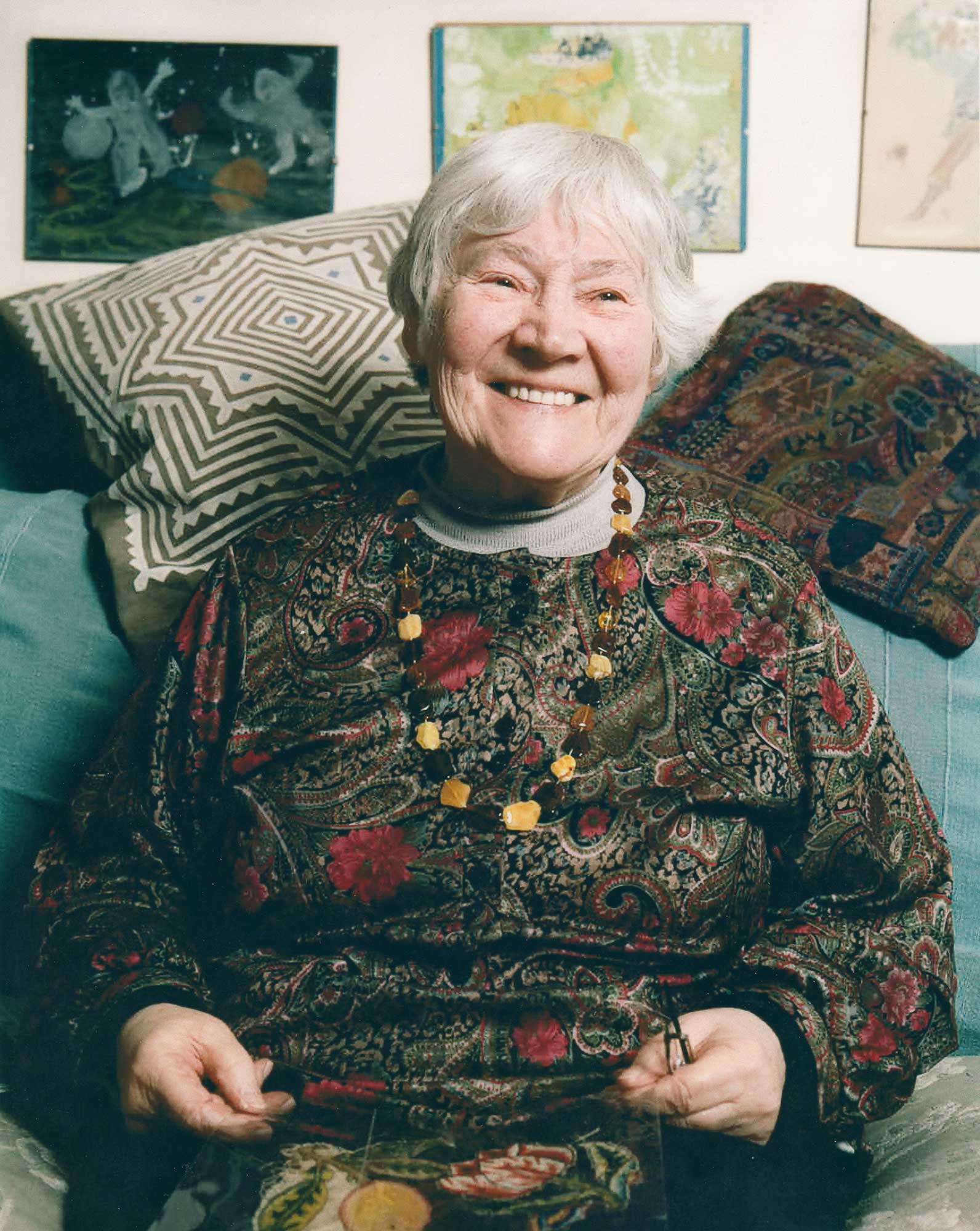 Portrait of Karen. Part of a project to photograph distinguished historians, conservators and curators of dress and textiles. Copyright Tom Gardner.

The following biography was written in 2004 for the occasion of Karen being made an Honorary Fellow of the International Institute for Conservation of Historic and Artistic Works. Since her death in 2018 many of her friends and former colleagues have written warmly about Karen – some of these pieces can be found in the Tributes and Obituaries sections of the website.

Karen Møller was born in Viborg, North Jutland, Denmark on 8 May 1921 and from 1942 to 1945 trained as a weaver and textile designer at the Kunsthåndværkerskolen (The School of Arts and Crafts) in Copenhagen. At this time the school was housed in the Museum of Decorative Arts (Kunstindustrimuseet) and this contact with historic collections helped to foster Karen’s interest in old textiles. In 1946 Karen married Norman Finch and came to England where she got a job at the Royal School of Needlework. She left there in 1948 when her daughter Katrina was born and she then spent several happy years as mother, housewife and weaver.

In 1954, Karen joined the Artwork Room at the Victoria and Albert Museum as the first female conservator and where she worked on tapestries. Her foreman was Horace Clark, restorer of miniatures, who introduced her to the ethics of conservation. It was at the V&A that she first began to train students and thus began her long career of training and mentoring textile conservation students. Throughout her career, Karen received support from George Wingfield Digby, Donald King and Santina Levey, who were successive Keepers of Textiles at the V&A.

Karen resigned from the V&A in 1959 and together with her sister-in-law, Greta Putnam, she established a conservation studio at her London home. In 1965, they were joined by Danielle Bosworth. Between 1959 and 1975 many hundreds of important textiles were conserved at the Ealing workrooms. Karen opened her doors to many students, among whom were Janet Notman and Dinah Eastop; in total Karen taught 85 students of 19 nationalities. In 1969, Stella Newton of the Courtauld Institute asked Karen to teach her students on the History of Dress Course about the history of textile techniques and how to handle textiles safely. As a result, Karen was awarded an honorary MA. Meanwhile, back at Ealing, the business grew and grew and gradually took over most of the family home until it became clear to several important and influential clients that it needed to be established in more suitable premises where a long-term future could be assured.

As a result, in 1973, a formal collaboration was established with the Courtauld Institute of Art to validate a three-year post-graduate Diploma in textile conservation. ‘Grace-and-favour’ accommodation was made available at Hampton Court Palace and the move took place on 14 April 1975. It was a festive occasion and the Textile Conservation Centre (always known as the TCC) had arrived. Life, however, was not easy. Karen had developed a world-wide reputation and was often asked to lecture and teach in the UK and other countries, but the TCC found it hard to reconcile the needs of teaching students with the commercial requirement of the conservation arm of the centre. Fund-raising became an important activity. Karen spent a decade as Principal of the TCC but, at the end of August 1986, she retired and was given the honorary title of Founder. 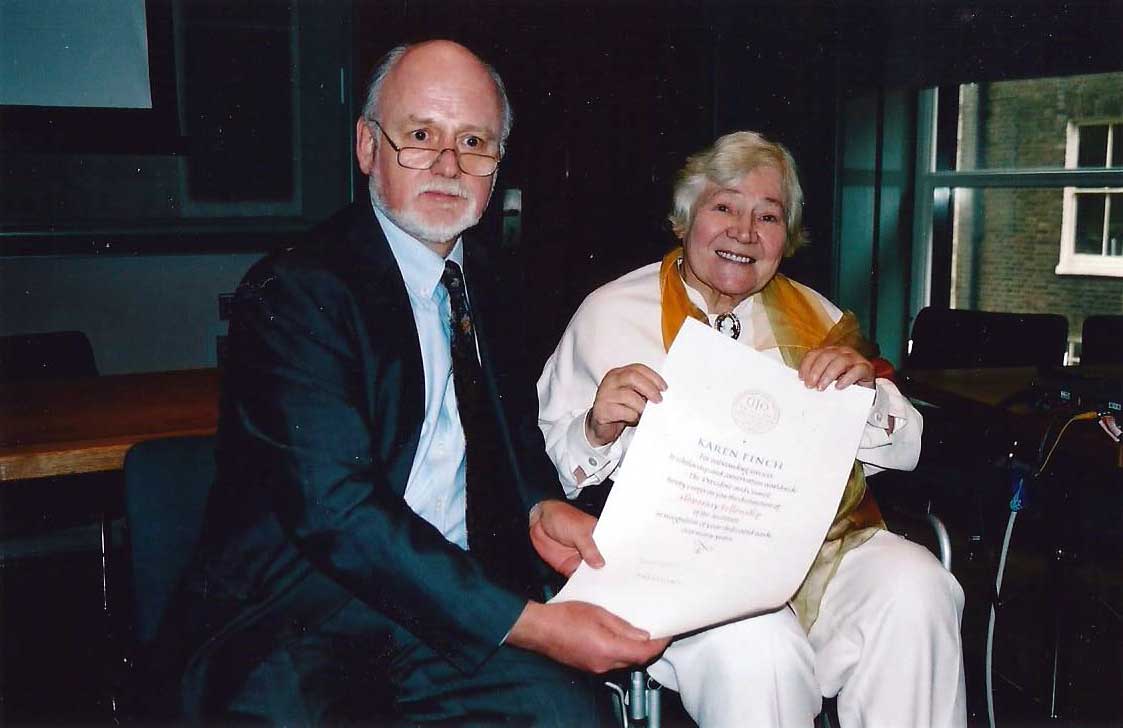 Apart from articles in various journals and conference proceedings, Karen wrote a book entitled Caring for Textiles with Greta Putnam, in 1977. A second edition appeared in 1985 (under a new title: The Care and Preservation of Textiles).

Karen’s extraordinary energy and vision has been recognised in many ways. She was awarded the OBE in 1976 for her services to conservation. In 1987 she received an award from the National Art Collections Fund for ‘Lifetime Service to the Arts’. In 1999 the University of Southampton awarded her an honorary DLitt. In 2000 friends and colleagues contributed to a volume of essays dedicated to her. The resulting Festschrift, entitled Textiles Revealed: Object Lessons in Historic Textile and Costume Research, was edited by Mary Brooks and published by Archetype Books.

Karen joined IIC in the 1950s and was elected a Fellow in 1962. She has been a member of the Council of the Leather Conservation Centre and the ICOM Costume Committee for many years. She is a founder member of the Costume Society and the Friends of Fashion (Museum of London). She has also been honoured by life membership of The National Trust and emeritus membership of the Embroiderers’ Guild. She is a Fellow of the Royal Society of Arts.

Karen has never failed in giving encouragement and advice to those who sought her help in the field of textile conservation, whether they were young conservators just starting out on a new career or more experienced people seeking information. She is recognised throughout the world of textile conservation as an éminence grise whose life and work live on in the TCC, now flourishing as part of the Winchester Campus of the University of Southampton. Congratulations, Karen – it gives me great pleasure to confer on you the status of Honorary Fellowship of The International Institute for Conservation of Historic and Artistic Works.