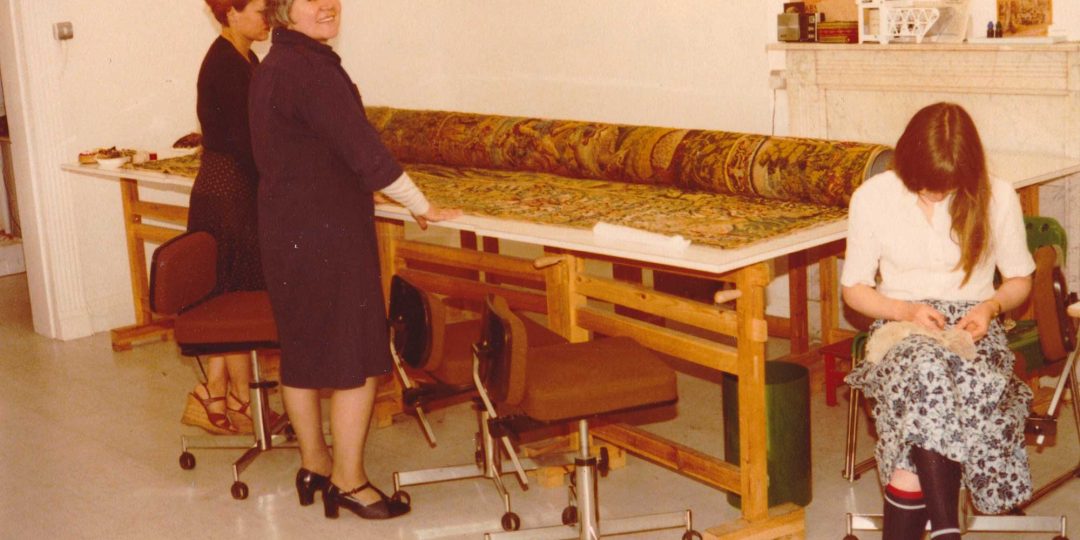 Observations on damage and repair of tapestry 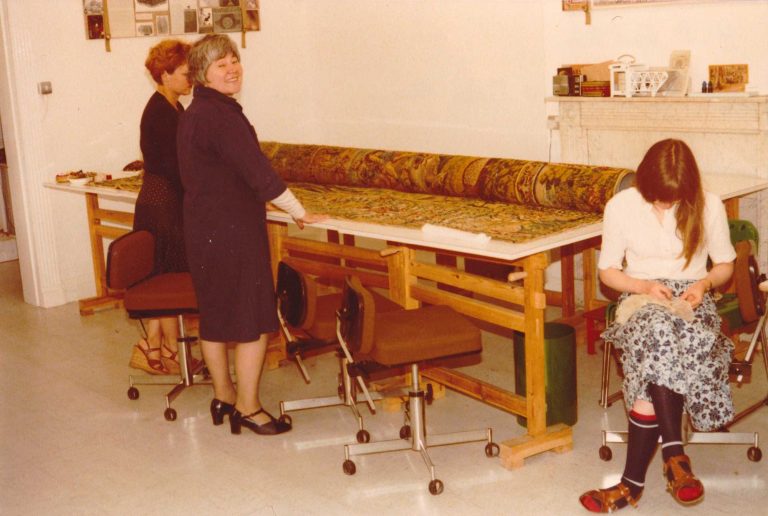 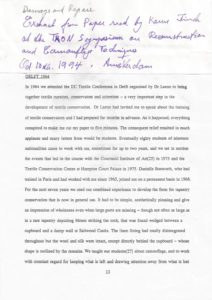 In 1964 we attended the IIC Textile Conference in Delft organised by Dr Leene to bring together textile curators, conservators and scientists – a very important step in the development of textile conservation. Dr Leene had invited me to speak about the training of textile conservators and I had prepared for months in advance. As it happened, everything conspired to make me cut my paper to five minutes. The consequent relief resulted in much applause and many letters from would be students. Eventually eighty students of nineteen nationalities came to work with me, sometimes for up to two years, and we set in motion the events that led to the course with the Courtauld Institute of Art (25) in 1973 and the Textile Conservation Centre at Hampton Court Palace in 1975. Danielle Bosworth, who had trained in Paris and had worked with me since 1965, joined me on a permanent basis in 1968. For the next seven years we used our combined experience to develop the form for tapestry conservation that is now in general use. It had to be simple, aesthetically pleasing and give an impression of wholeness even when large parts are missing – though not often as large as in a rare tapestry depicting Moses striking the rock, that was found wedged between a cupboard and a damp wall at Saltwood Castle. The linen lining had totally disintegrated throughout but the wool and silk were intact, except directly behind the cupboard – whose shape is outlined by the remains. We taught our students (27) about camouflage, and to work with constant regard for keeping what is left and drawing attention away from what is lost – sometimes by very simple expedients, such as stitching the silver stains in a Mortlake tapestry at Kensington Palace in place and making them pretend to be silver highlights still. Danielle introduced colour indications into the couching and devised how to put back the dark outlines in Gothic tapestries on which their design depends. Most of these have been rewoven several times before. In one Esther tapestry (28) woven at Tournai we found evidence of three or four reweavings (29).

We prepared our students, whether at Ealing or Hampton Court, for finding their own way by teaching them basic principles. Each commission added another facet to both their experience and ours and confirmed the impossibility of laying down unbreakable rules when dealing not only with works of art, but also with past restorations and the rights of owners to treat their possessions according to the use they want to make of them.

Our individual experiences, our educational background and the culture in which we grew up all influence our thinking. It took a long time for me to accept that my training in weaving and design did not qualify me to understand the thinking behind the work of craftsmen and women of another age – or the complicated motivations of their patrons. The creative ability of conservators should not lead them to “improve” an original work. Objects have to speak for themselves.

Any “improvement” may become ludicrous to the next generation – as is the reweaving of the brown eyes of Charity in the Three Fates tapestry (30) at the Victoria and Albert Museum that now look at us through the make-up of a 1940s film star and the leg in the Anthony and Cleopatra tapestry in the Goldsmith’s Hall which a Victorian sense of decency had caused to be rewoven to match Anthony’s draperies. It reappeared in the course of fading.

The ideals of each age are impressed on all its creations – and that includes us.

The strangest tapestry I was ever asked to conserve was shown at the International Treasures Exhibition at the Victoria and Albert Museum in 1962. I saw it there and took it to date from about 1500. It depicts a dancing scene with four couples and two musicians – one playing a drum, the other a flute. The tapestry was dirty and looked in need of repair. I wanted to make it better, and was pleased when I was asked to conserve it in about 1964.

We soon discovered several discrepancies in the material and techniques for which it was difficult to find an explanation. The warp yarns plied from hard twisted singles, would have made beating down the weft very difficult. The holes seemed to be structural and part of the weave. Also, they appeared in blue or light-coloured places that are normally very resistant to decay. The weft yarns went over only a few warps at the time and would turn several times in the same colour area. Some of the yellow and green colours were unusual in a medieval tapestry – mainly because they had not faded. The musician on the right appeared to consist of two unconnected pieces. Just as we had finished the repair, we received a Christmas card from the Pierpoint Morgan Library in New York, showing a woodcut with the same design. It had been taken from the Nuremberg Chronicles of 1493 by Hartmann Schedel – artist Anton Koberger. He had called it “Dancing on Christmas Eve”. People who danced on Christmas Eve were doomed to dance the whole year through.

We had noticed the un-medieval treatment of the faces with their tired expressions, that suggested exhaustion consistent with June! Soon after, another tapestry woven from another illustration in the same Nuremberg Chronicles came to the Victoria and Albert Museum for advice – this time with its origin fully documented. It had been woven in an American workshop about the turn of the century.

Many people had been involved in our search including students from around the world and and in 1990 came a strange twist – on a visit to former students in Prague we were taken to the Castle of Zvíkov for an afternoon visit. We had enjoyed talking over lunch and it was late when we entered a room with an amazing 15th century fresco. Amazing because it depicted our tapestry, but with one more couple and a child or a jester in particoloured dress. I used my remaining film – but the light had nearly gone.

We learned that the fresco had been restored in the 19th century. Presumably it had been there for as long as they said it had. While pondering this thought I realised that the woodcut would have been made after the artist had seen the fresco and then I wondered about the sources of his other inspirations and if we should ever know.

The chair covers had been at Uppark during the life of the wife of their first owner. She had taken exemplary care of all the furnishings there. Her successors had equally good intentions, but not as much success. The silk in the chair covers had nearly all disappeared and the dark purple wool background to the Aesop fables designs had changed colour and become a nondescript faded brown. The surface texture was harsh and coarse to the feel.

I was informed that all the textiles on display had been regularly sprayed with a solution of Saponaria in water because this was believed to be beneficial. I thought about this and realised that the spraying had created the conditions for bleaching out of doors – with the Saponaria providing the alkaline ingredient and the dust on the covers the acid part. Washing out the Saponaria restored some of the softness of the wool and couching with colours indications put back a semblance of the silk.

Inverary Castle – Beauvais tapestries of about 1785

These fine silk tapestries had suffered water damage during a fire. The water had come through the plasterwork ceiling and had picked up lime on the way, which had made the silk hard and brittle. The lime had to be washed out, but the dyestuffs of the tapestries, being products of their time, were highly suspect. After much deliberation and many tests in a remarkably short time, Saponaria was chosen for the detergent.

Miraculously the colours were revived as the lime came out and the tapestries became quite strong and supple again.

The success with the Beauvais tapestries led us to consider more use of Saponaria – which is after all one of the oldest detergents we know. The next opportunity came with the Hero and Leander tapestries – but Saponaria made no impression on their engrained dirt at all. Perhaps the differences are related to the Inverary tapestries being kept in the clean air of the Highlands of Scotland and the Hero and Leander tapestries in the industrial pollution of the surroundings of Manchester.

All in all these experiences suggest a need for further research.

The differences between the effects of natural dyestuffs and the synthetic dyestuffs of the 19th century has caused much visual damage to tapestries by not being recognised by tapestry repairers and conservators.

Unfaded yarns dyed with 19th century synthetic dyestuffs may look like yarns dyed with natural dyestuffs, but the difference after exposure to light and different types of pollution is startling. Yarns dyed with 19th century synthetic dyestuffs tend to change into golden brown colours, sometimes even a strong red-brown, quite a disturbing colour. Disturbing because of being unintended. Yarns dyed with natural dyestuffs mostly retain their intended colour, except of course for fading. Both types fade harmoniously when not mixed. It is only when used for repair on each other, that the effect is displeasing.

The effects of the two types of colouring is well illustrated by comparing tapestries woven at approximately the same time – one with synthetic, the other with natural dyestuffs. Synthetic dyestuffs were used for a depiction of a knight owned by Gordon Cullingham (author of the illustrated handlist “The Royal Windsor Tapestry Manufactory”, published by the Royal Borough of Windsor and Maidenhead in 1979) and natural dyestuffs for the ship tapestry owned by Birmingham Museum and Art Gallery, which was woven at the Merton Abbey Workshops. This manufactory is described by Oliver Fairclough and Emmeline Leary in “Textiles by William Morris and Morris & Co., 1861-1940” published by Thames & Hudson in 1981.

Other differences included that the Windsor Manufactory used entirely traditional tapestry weaving techniques, while the Merton Abbey weavers were more adventurous. Their attempts at lifelike representation by letting the weaving outline grasses and other natural forms unfortunately caused warring tensions in the tapestries, which in one narrow tapestry depicting a ship caused twisting when hanging. In wider tapestries, their weight tended to even out the irregularities.

When using modern dyestuffs, the problems of concern to tapestry conservators lie mainly in their light reflecting qualities – or so it appears at present. However, no dyestuff is totally permanent and we shall be best suited by using as few replacement yarns as possible.