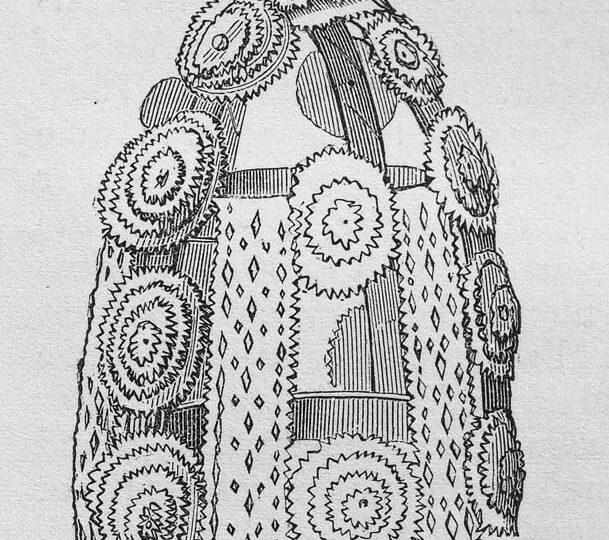 Some early images of funeral garlands 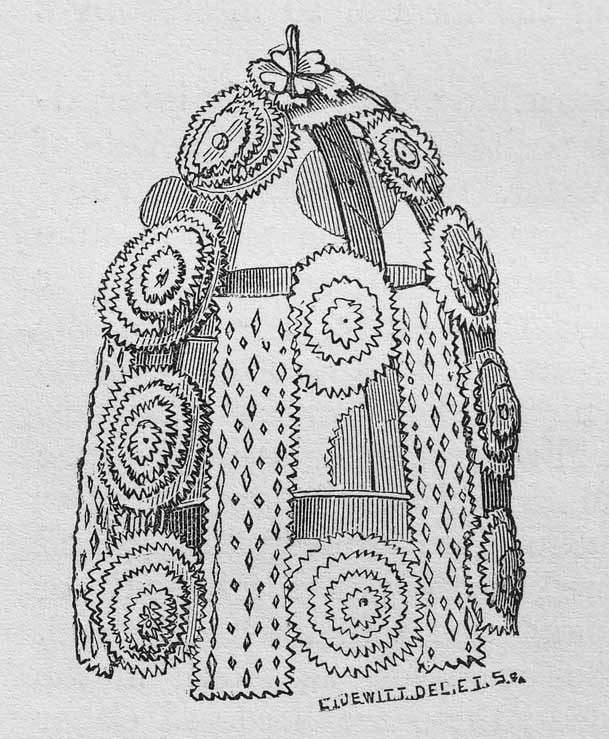 The folk custom of hanging funeral garlands in churches was one of many topics that would have been raised in the wide-ranging discussions that generally followed Karen Finch’s weekly lectures to first year students on the Textile Conservation course in 1980/81. Customs involving textile objects that connect our lives to a more distant past formed a persistent undercurrent to our studies. Two centuries ago, the loss of such traditions with their deep connections was already being remarked by John Trotter Brockett, who wrote of virgin’s garlands: ‘There is … something so strikingly emblematic, so delightfully soothing in these old rites, that though the prototype be probably heathen, their disuse is to be regretted’ (1829: 317). Recently, I was able to acquire a print of Llewellynn Jewitt’s 1860 article on funeral garlands, with illustrations from his own original sketches made at a time when some late eighteenth-century garlands still remained in good condition in Derbyshire churches. These may be our earliest clear images of funeral garlands and their construction, so they deserve to be more widely known and accessible. Jewitt writes:

It is curious that although the custom of carrying and suspending funeral garlands has been described, and named, by so many writers, no illustration showing their form, should as yet have been given. […] The engravings here given are from two examples, which are, happily, preserved in the Museum of Thos. Bateman, Esq., through whose kindness we are enabled to present them to our readers.1 They are from MATLOCK CHURCH, and were added to Mr. Bateman’s collection at the time of the restoration of that edifice in 1859. The garlands, it will be seen, are each composed of two hoops of wood, with bands crossing each other at right angles, and attached to the hoops; thus forming a kind of open arched crown. The hoops and bands are all of wood, wrapped round with white paper, and at the top is a loop for suspension. The hoops and bands of the smaller one, as shown in the accompanying woodcut (fig. 1), are decorated with paper flowers and rosettes, and at the top is a flower formed of hearts, and having somewhat the appearance of that of the Clarkia pulchella. From between the rosettes of the upper hoop, a paper ribband, gimped on the edges, and ornamented by diamonds cut out with scissors, hangs down to below the lower band, to which they are not attached. In this garland there are no gloves remaining.

The larger example, shown in Plate II (fig. 2), is remarkably fine and interesting. The hoops and bands are decorated with paper flowers, or rosettes, intermixed with bunches of narrow slips, or shreds, of paper; and at the top is a bunch of the same, over paper folded like a fan. Originally, the flowers have been formed, some of plain, and others of folded, or crimped paper; and others again of both; and in some parts the paper has been afterwards coloured red or blue, thus producing a somewhat gay appearance. From the centre of the top are suspended a pair of gloves, cut out of white paper, and a kerchief or collar, also of paper, gimped on the edges and carefully folded. The hand of the gloves hangs below the lower hoop, as shewn in the plate. […]

Besides the garlands we have been describing, five highly interesting examples still hang in their original position in the North Aisle of the Parish Church of Ashford-in-the-Water, near Bakewell. These we also engrave from a sketch made on our visit to the place in June of the present year (fig. 3). Although these garlands in general character resemble the others we have described, they differ in some of the details. They are not so profusely ornamented with rosettes, bear no bunches of shreds of paper, and have no “pinked” or cut ribbands. Each garland contains a single glove, and a kerchief or collar, but the gloves do not, as in the example on plate II, hang below the lower hoop. Like the others, the Ashford garlands are formed of hoops and bands of wood; and these are covered with paper “frilled” or “fulled” on like the border of a cap, and tied round with ribband. From the upper hoop, in some of the examples, as shown in the engraving, paper ribbands are suspended; these are bordered either with a broad black line or with a red one, and are “crimped,” the lower ends being rounded, and tied with a small bow or ribband. On some of them are rosettes, alternately black and white, or white with a black border. On the collar or kerchief of each, has been written a verse of poetry, and the name, age, and date of death of the virgin in whose honour they were prepared. Owing to age, the decay of the paper, the fading of the ink, and the difficulty of examining the garlands as they hang, in situ, the writing on most of them it has been impossible to transcribe. On one, however […] we succeeded with considerable difficulty in deciphering the following lines:— 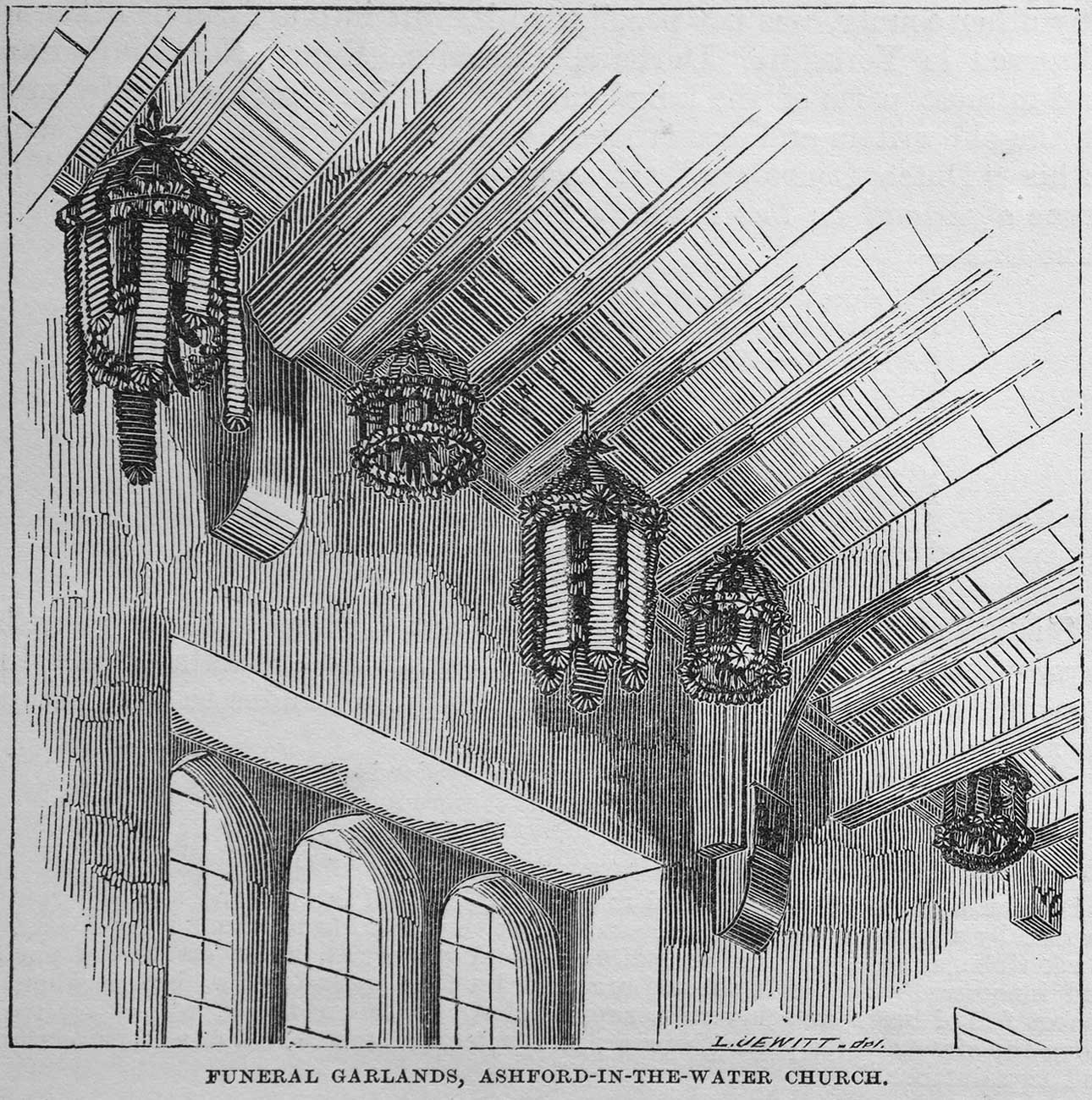 Be always ready no time delay,
I in my youth was called away,
Great grief to those that’s left behind,
But I hope I’m great joy to find.

The author, Llewellynn Frederick William Jewitt (1816-1886), began his working life as a wood engraver. From 1849, he gained more fulfilling employment as a librarian and later as an editor and author. In 1853, Jewitt was elected a member of the Society of Antiquaries. He established The Reliquary in 1860, for which he was both editor and chief contributor. Jewitt was a prolific writer on English antiquities and topography, especially with regard to Derbyshire where he grew up.