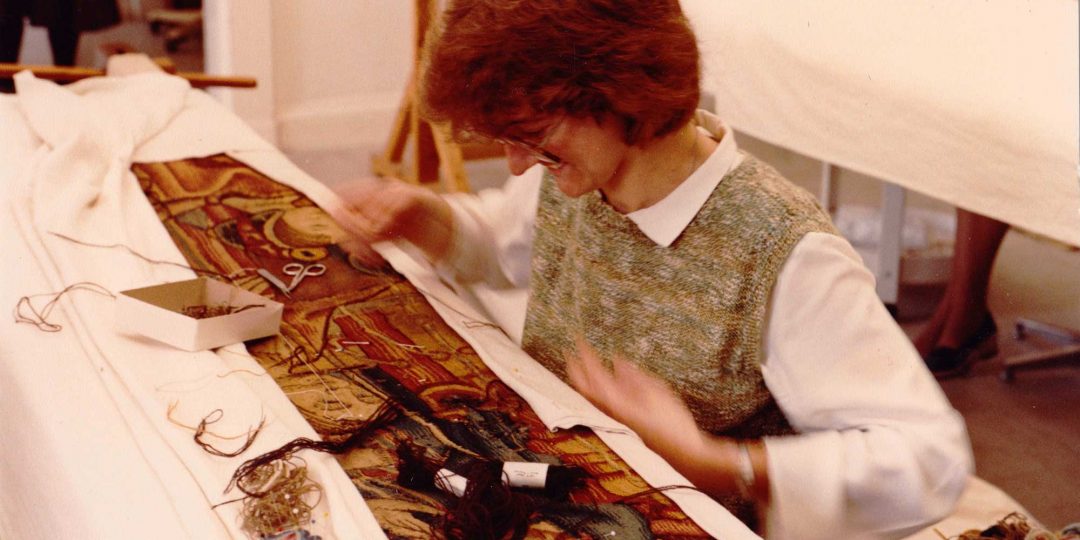 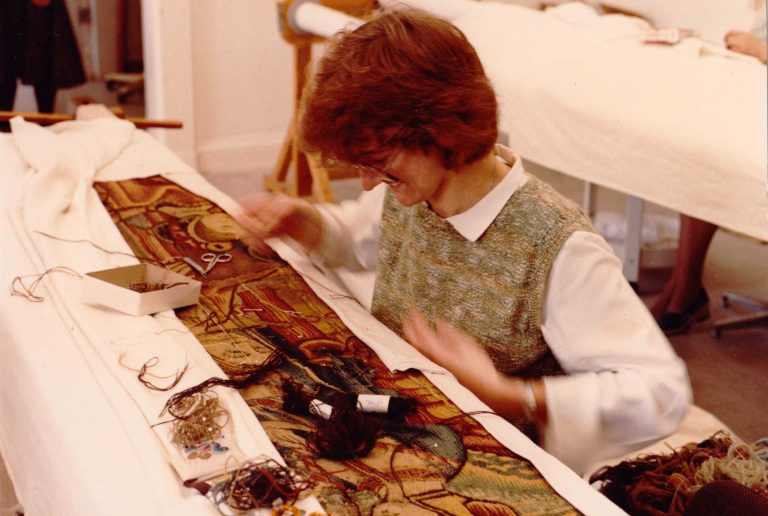 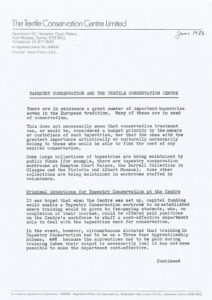 There are in existence a great number of important tapestries woven in the European tradition. Many of these are in need of conservation.

This does not necessarily mean that conservation treatment can, or would be, considered a budget priority by the owners or custodians of such tapestries, nor that the ones with the greatest importance artistically or culturally necessarily belong to those who would be able to find the cost of any desired conservation.

Original intentions for Tapestry Conservation at the Centre

It was hoped that when the Centre was set up, capital funding would enable a Tapestry Conservation workroom to be established where training would be given to fee-paying students, who, on completion of their courses, could be offered paid positions on the Centre’s workforce to staff a cost-effective department able to deal with the tapestries sent for conservation.

In the event, however, circumstances dictated that training in Tapestry Conservation had to be on a Three Year Apprenticeship Scheme, and, because the apprentices had to be paid during training (when their output is necessarily low) it has not been possible to make the department cost-effective.

As it has also proved difficult to obtain financial help to offset the cost of paying and training apprentices, the intake has always been limited to the number which the Centre can afford rather than that which would effectively build up the desired workforce more quickly.

It has been calculated that to make the workroom pay its way, it will be necessary to aim to employ four or five fully trained Conservators to cover the cost of one organiser. Taking into account the known amount of potential work available and allowing for natural wastage of staff, it is estimated that the target should be to maintain a minimum workforce of eight trained people under a Head and Assistant Head of Department.

Under the present apprenticeship scheme from 1975, four people have been fully trained.

One apprentice will finish in 1982, two apprentices will finish their training in 1983, a further four apprentices are in their second or first years. Between 1975 and 1982, despite a workforce of people mostly in training and the time-consuming task of supervision by the few trained people, conservation treatment has been given to an average of ten tapestries each year (seventy in all).

It was hoped that when the Centre was set up, capital funding would enable a Tapestry Conservation workroom to be established where training would be given to fee-paying students
Tapestries awaiting conservation

The setting up of the Centre with its plans for Tapestry Conservation revealed that for possibly fifty years, there had been too few qualified Tapestry Conservators and too few funds to pay for the conservation of many important tapestries. However, during its first eighteen months, the Centre was offered so many tapestries for treatment that it was thought it would take four years to work through the waiting list. Experience had shown that tapestries actually brought to the Centre and stored ready for treatment are the ones most likely to be kept on this waiting list by their owners.

However, because of the system of training which the Centre was obliged to adopt as explained above, it is only now that there is a sufficient number in the workforce to allow forward planning, but this too has its problems, especially since owners are warning us that, should a Wealth Tax be introduced, they may not be able to find funds for conservation of tapestries when paying tax on their value.

This may involve examining or re-examining each tapestry to estimate the cost of the necessary work, or, if an estimate has already been made, updating it to current rates.

Owners may well have no conception of our problems and not reply immediately, and another letter from us may cause annoyance as clients, quite justifiably, feel that they too have been kept waiting for a long time.

The client may also experience difficulty in obtaining funding for the work.

Funding available from public sources, may have have the proviso that the work must be completed within a financial year, which imposes strictures on the conservation department and can affect planning of other commissions.

Loss of personnel in present circumstances is serious, because it means disruption of planning and consequently less income.

Action by the Tapestry Conservation Department

Owners of tapestries on the waiting list are being contacted to find out exactly what work should be scheduled for the future – starting with private owners who may have made other arrangements and wish to withdraw their tapestries from the list.

Because publicly, and some privately, funded work must be completed within a specific time, other commissions are only being accepted if they can be fitted in as and when possible and with no deadline.

The Textile Conservation Centre is investigating the possibility of altering the arrangement of training by apprenticeships, so that the number of the workforce can be increased.

There are suitable applicants to train for tapestry conservation, which the Centre cannot afford to accept as paid apprentices. The cost of paying trainees is a financial drain, which is making the department less than cost effective and the slow recruitment, because of having first to raise the cost of salaries makes it difficult to get up to the desired number.

Properly trained tapestry conservators are expected to produce the balanced work that will enable a damaged tapestry to retain its artistic and cultural integrity and regain the solidity necessary for display by being hung on a wall.

Each person is taught to exercise individual judgement in the details undertaken by that person and at the same time to conform to the overall rules.

In terms of effectiveness our structured apprenticeship course (Appendix I) is producing what is needed, namely persons trained to a uniform standard and capable of working in a team.

In terms of cost apprentice training is proving too expensive to be sustained unless substantial grant aid from sources outside the Centre is made available.

Proposals for recruitment and training to keep the tapestry conservation department at full strength include:

When considering these four suggestions, it will be seen that they all have various merits and demerits.

Would be an ideal solution, but it is unlikely to fill the needs of the Centre for the foreseeable future, because:

We should have to abandon our present probation period, since a probation period for students would be an unrealistic demand. By opening the one year course to a wider area than now without restrictions on the intake, there is the risk that people with no other experience would take the one year course on its own and then represent themselves as fully trained, though their practical experience would be very limited and not as now backed by their museum or university intern experience.

Given that such a risk is acceptable, the Centre could:

Is impracticable in a number of ways including that:

Provides the advantage of a proven satisfactory training system. It might, however, be necessary to raise the funds for each new apprentice before training could start.

The offer of a position at the Textile Conservation Centre at the end of the training should be expected, provided that the training of the apprentice has proven acceptable to all concerned.