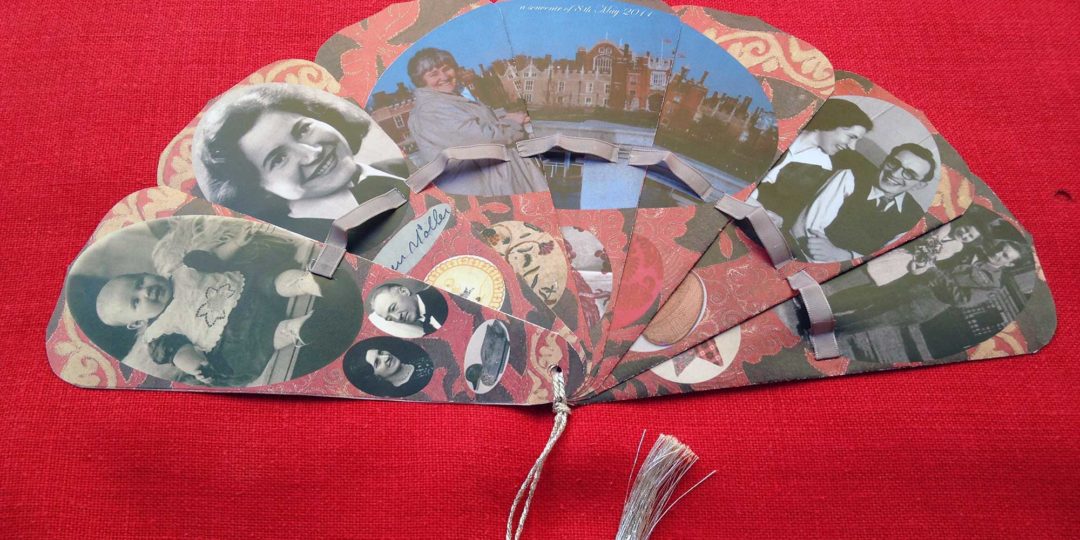 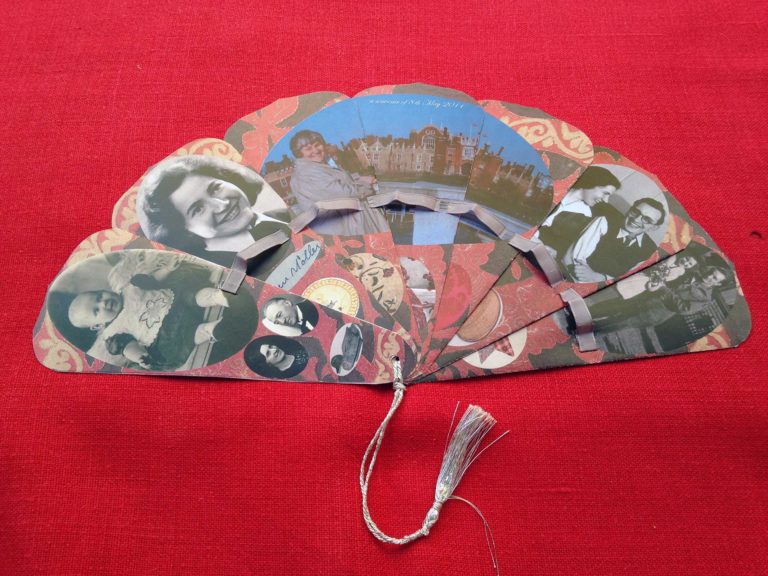 An enormous curiosity about textiles led Karen Finch, who died this year aged 96, on an unusual life journey as a weaver, textile conservator and educator. Born the eldest daughter in a Danish farming family, her presumed fate was marriage, bringing with it land and children, but she was determined not to bow to such expectations. She found tedious the birthday and Christmas gifts of silver cutlery intended for her trousseau. The pathway out of this conformity was Art School in Copenhagen. Initially resisted by her father, he relented when the local pastor, who had returned to the capital, agreed to look out for her there. By then, Denmark was an occupied country, and it was under conditions of wartime, at the Kunsthåndværkerskolen, that Karen’s varied textile propensities solidified in the directions she carried forward the rest of her life: design, textile techniques and domestic textile practices. Karen wrote about this formative period in “How it all began” (Costume, 45, 2011, 101-10).

Karen thrived on Gerda Henning’s rigorous theoretical and practical course in hand-weaving. Soon a master of colour-and-weave effects, and proficient in the perfect selvage, Karen also imbibed workroom practice, including estimating time and materials for large and complex projects that was to serve in future. Architect and furniture designer Kaare Klint, who arranged the school within its eighteenth-century buildings, was also a close influence. It is easy to see parallels between Klint’s re-purposing of historical architecture and Karen’s plan for the Textile Conservation Centre at Hampton Court Palace. While design had to be of its time, and never historicising, Karen was exposed to archaeological textiles and the reconstruction of ancient techniques through a fellow student, Ninna Rathje, later closely involved in the Archaeological Research Centre at Lejre. Of course, art school life was not all study. Karen recalled boiling eggs for the furniture students in the dye room to cadge invitations to their fabulous parties, which, due to the wartime curfew, were all-night events.

In the celebratory atmosphere of the Liberation of Denmark, Karen met Norman Finch of the Eighth Army, and they were married the next year in Holmens Kirke by her pastor. Consenting to perform the service in English, and knowing Karen from childhood, he cut out the line about “obeying” so that she might keep her marriage vows. She would not wear a wedding ring: “that outmoded symbol of women’s dependency on men.”1 Karen and Norman had a loving and supportive relationship, and were to share a mutual interest in teaching when he joined the Furniture and Timber Industry Training Board.

In 1946, the couple moved to London. Karen could hardly conceive of not working, yet it was by chance that she wandered into an exhibition at the Royal School of Needlework (seen as “terribly old fashioned designs and cases full of stuff given by Queen Mary”) and ended up being offered a job in the restoration section. There she performed darning techniques on tapestry, and the effective but disfiguring fishnet stitch for silks, having to store up her own ideas of how the work might better be done with more sympathy to woven structures. With the birth of her daughter Katrina in 1948, Karen left the RSN hoping to take up weaving again, producing beautiful rugs at home. But post-war London was not ready for Danish modern design. In 1954, Karen wrote to George Wingfield Digby at the V&A about employment, and was engaged for repair of tapestries. There she questioned the suitability of methods that obliterated the intended design (“the greatest step forward was when I was allowed to take out the patches in the sky”) and there she began the warp couching method. Karen was also an activist for documentation of conservation work at a time when this often went unrecorded. Curatorial staff stopped by to see the work being done, and Karen found many with kindred interests, making life-long friends. Donald King was later President of the Textile Conservation Centre, and Karen acknowledged that without him, it wouldn’t have happened. For his part, King cited Karen’s tireless lobbying as a “persuasive, obstinate and transparently honest advocate.”2 At the V&A, Karen met pioneering conservators from abroad: Louisa Bellinger, Johan Lodewijks and Jentina Leene. The first international meeting about textile conservation was organised by Dr Leene and her staff at Delft in 1964, where Karen gave her first paper on the training of textile conservators. But the V&A was a place of strict hierarchies and myriad restrictions, and Karen was not one to respect restrictions unless they had a sound basis. She left in 1959, hoping once again to return to woven textile design exploring her revitalised interest in ancient techniques stimulated by work at the Museum.

Karen’s V&A colleagues couldn’t really believe this is what she wanted to do, and continued to pass interesting conservation commissions on to her, later asking her to train tapestry conservators. Karen knew that she would have to compress experience gained over many years into a practical course of study for these students. An understanding of historical techniques being essential, these could be learned in the form of a tapestry sampler. Another idea that developed, especially after being asked by Stella Mary Newton to teach textiles to students on the Courtauld ‘History of Dress’ course, was “instant knowledge.” Karen assembled boxes of historical fragments in which students could see and handle clear examples of different techniques, thereby quickly grasping concepts difficult to express in words. These boxes were the seed of an important Reference Collection that also reflected Karen’s evolving thoughts about classifying textiles. Materials and techniques took precedence, but there was room for categories such as “beds” and “household textiles,” reminding us how the everyday purposes of textiles have shaped our history.

Danielle Bosworth joined Karen in the Ealing workroom around 1967. The volume of work and requests for training had grown to the point where the value of objects in the house created insurance anxieties, and the introduction of VAT in 1973 meant the simple work culture of independent contracting would have to change. Already in 1971, Karen had drawn up a memorandum and invited stakeholders to a meeting presenting the need for a National Centre for Textile Conservation in order for work and training to continue; only charitable status would make this possible. This took three years to achieve, but meanwhile an offer of temporary grace-and-favour accommodation at Hampton Court had been secured, and the TCC became a reality in 1975. Karen was made an OBE in 1976 for her services to conservation. By 1977, with the three-year postgraduate course established and a conservation scientist in post, Karen had achieved her aims for the Centre. Donald King wrote of the ensuing period: “it was she who had to bear the principal responsibility for directing all the activities of the Centre, for solving all its problems, and for raising the funds for its survival. […] And things were not made easier by the fact that Karen was not a tough, ambitious career woman, but a warm, emotional, human being deeply concerned and involved in the welfare and happiness of her family, her staff and her students. […] her resilient temperament bore her up and she continued to encourage the rest of us with an optimistic smile that rarely faltered.”3 On the verge of retirement in 1985, Karen, typically looking forward, warned against stagnation: “consolidation… can only lead to complacency which is no good to anyone, least of all a new profession. Open minds are essential to further progress.”

Retirement could never have meant inactivity for someone like Karen, and she continued to give conference papers, provide conservation advice and write English abstracts of Danish textile research. She had never given up creative work; as someone who was taught to embroider before she could read, her hands craved activity, and this was found in crochet. As with all manual actions, this she did at lightning speed, working complex patterns with hardly a reference to a design. Karen also pursued research interests with great determination, filling binders and box files with notes and reference materials. Inheriting Evelyn Birkill’s teaching collection of goldwork, gold became an enduring fascination, and she translated a rare Danish text on gold thread-making for the Early Textile Study Group. Card weaving and sprang samples testified to her practice of learning through making. The technique of buratto became an obsession that helped her through Norman’s illness and death in 1996. Karen saw textiles as connections with our ancient past, and her thought worked in visual leaps probably inspired by R. Broby-Johansen who, for example, paired the metallic attachments of a Mongolian shaman’s dress and European military decorations, instantly narrowing the distance between concepts of power and magic.4 Karen was amused by the human propensity to disguise technical innovation under traditional form; and by fossilised dress that preserves ancient practices. Textile techniques and materials were the important markers able to connect workshop and cultural traditions across time and geographies. And textiles themselves were historical documents.

Karen’s prime legacy was the transformation of textile conservation into a fully professional activity with a repertoire of practice, a scientifically-based theory and a code of ethics. Design and historical information was no longer to be obscured by repair, and this meant that conservators needed to be able to recognise the importance of what was revealed in the course of conservation, working closely with historians and scientists. Ultimately, the aim of conservation was to stabilise, not to conceal age or damage. In Karen’s words, “Why shouldn’t the public see the truth of time?”