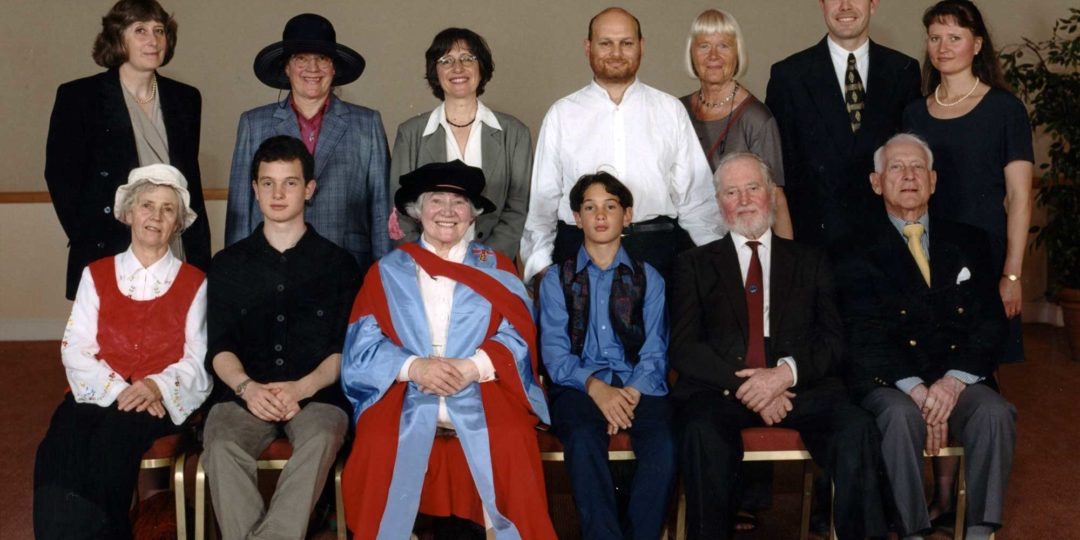 Legacy
Tributes
Tribute to Karen Finch on the relocation of the TCC to Winchester
July 2nd, 1999

This oration was delivered by Ronald Stannard J.P., B.A., Public Orator of Southampton University, on Friday, 2 July 1999 at 3.30 p.m. at Winchester Guildhall 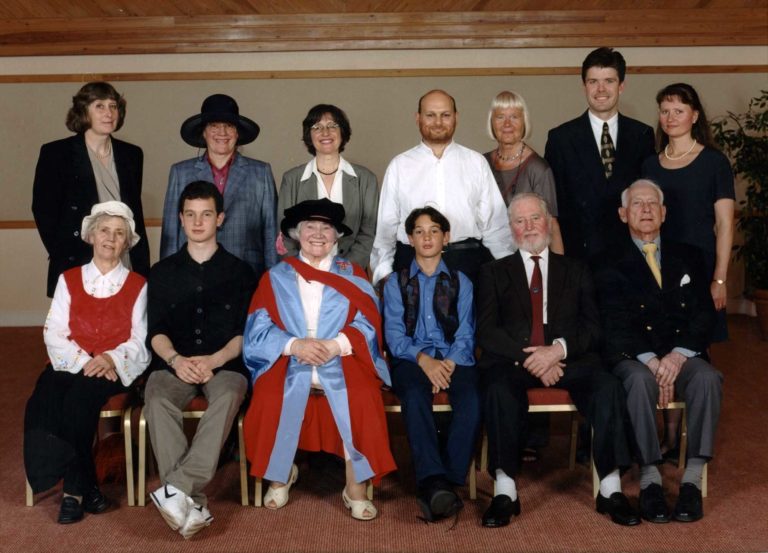 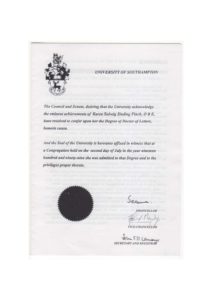 There is a moment in all our lives when the door opens and lets the future in. For Karen Finch that moment probably came when, as a young girl in Denmark, she stood in the Village church entranced by the embroideries and carvings of a former age, and sensed the hidden evidence of their history. Now, more than 60 years later, she stands here in Winchester, also a place of history, to be honoured for her life’s work which has shaped the field of textile conservation as we know it today. She is the founder and former Principal of the Textile Conservation Centre which formally became part of this University last year. It will shortly move from its present base in Hampton Court Palace to a fine new building here in Winchester and it is particularly fitting that at this pivotal point in the Centre’s development we should honour the woman whose pioneering work established textile conservation as an international discipline based on preserving textiles as historic documents. No doubt she recalls the complex logistics of the move, nearly 25 years ago, from her workshops in Ealing to Hampton Court when the Centre was first established. She is unlikely to be involved on this occasion, but such is her vitality and undimmed enthusiasm that it would be unwise to bet against it.

In an important paper on “The History and Development of Tapestry Conservation,” Karen writes movingly about her belief in the continuity of history – a belief that has informed her approach to the practice of conservation. It has its roots in her upbringing on a farm in Jutland where she was surrounded by the artefacts and tools of the Bronze Age; and surrounded, too, by the ancestral folk-wisdom of Denmark and tales of the “little people” who guarded the gold in the tombs and looked after the animals on Christmas Eve for a bowl of rice porridge. And, as we have seen, this belief began to coalesce with her interest in textiles during her visits to the village church. At that time her ambition was to be a famous textile designer and it was this that led her to study weaving and design in wartime Copenhagen. Whilst there she was taken to see the work of the tapestry restorers at Rosenborg Castle and was not, it has to be said, too impressed. “I thought,” she says “they were doing it all wrong” – the first of several occasions in her early career when this thought was to cross her mind! But it spurred her to explore the concept of conservation and to think about the special responsibilities of conservators; and in so doing she learned about the Swedish Pietas Association and its principle that conservation should be practiced under scholarly control.

It was, perhaps, a significant moment in her professional life. An even more significant moment in her personal life came when she met Norman Finch at a party in Copenhagen as the war ended. “The Danes are very good at parties” she says, and this one must have been particularly good for shortly thereafter they were married. Norman’s influence on her subsequent career was to be crucial: he gave unfaltering support as their lives and home were gradually taken over by textile conservation and until his death he provided vital administrative and financial expertise both before and after the establishment of the Centre.

Karen knew that with imagination you can create anything. But she also knew that the trick is to stir other people’s imagination and for that you need persistence, energy and high emotional investment.

They moved to England in 1946 and Karen began work at the Royal School of Needlework on the repair of historic tapestries and textiles. She was there for two years until the birth of her daughter Katrina, whom we are delighted to see here today with other members of her family. She continued to do some work at home in Acton for the Royal School until, in 1954, she joined the Conservation Department at the Victoria and Albert Museum to work with tapestries: Up to that point tapestry conservation had been considered men’s work and Karen encountered not only entrenched attitudes but also entrenched practices which were at odds with the way she was beginning to think about conservation. She was eventually allowed to introduce some of her ideas and to begin some training but in 1959 she decided to leave in order to return to design and weaving and further study of Textile techniques. The move gave her more freedom to develop her ideas but she continued to treat textiles for the Victoria and Albert from her home and also to train textile conservators.

As Karen’s reputation grew she was inundated with requests for training from around the world; and as the 1960s drew to a close she had 85 students from 19 nationalities and a rapidly growing number of conservation projects. In 1968 she and Norman moved to a larger house in Ealing but the pressure continued unabated. In that year, too, she was invited by Stella Mary Newton to teach textiles to History of Dress students at the Courtauld Institute, beginning what was to be a significant input into the development of that discipline.

The overwhelming volume of work and the pressures on space at Ealing were, perhaps, the spurs that she needed to crystallise her ideas into the proposals that would eventually result in the formation of the Textile Conservation Centre. Over four years from 1971, Karen refined and developed those proposals in parallel with a gruelling round of meetings and tireless lobbying to win friends and influence people – sometimes exhilarating and often frustrating – until in 1975 the plans were finally realised by the establishment of the Centre in “Grace and Favour” accommodation at Hampton Court Place with Karen as its first Principal. With hindsight (a facility freely available to Public Orators) we may say that it was a role that had been waiting for her since childhood. A year later she was awarded the OBE for her contribution to the conservation profession. 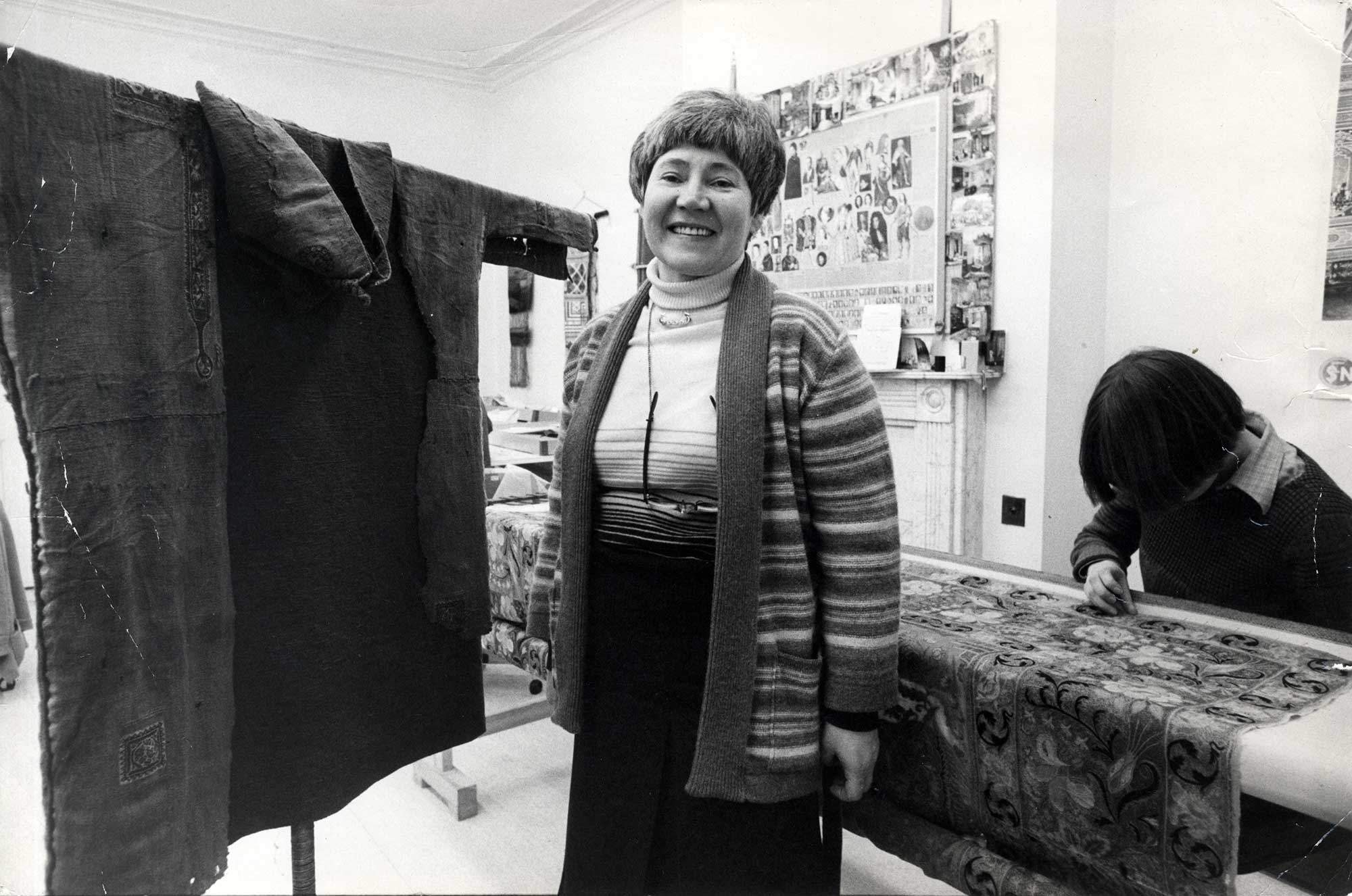 Karen with a tapestry at the TCC. Photo by Paul Armiger. Copyright Daily Telegraph.

It is an extraordinary story of perseverance against the odds to fashion a dream into reality. Of necessity, this short account slips quickly by the daunting problems Karen and her small band of loyal helpers faced, not least the task of raising funds for the Centre’s survival. But progress, as we know, often reveals itself as a matter of character and above all, perhaps, imagination. Like Peter Pan, Karen knew that with imagination you can create anything. But she also knew that the trick is to stir other people’s imagination and for that you need persistence, energy and high emotional investment. And to this mosaic of qualities which Karen has in abundance, we should add her personal charm, which has an edge and an effectiveness that makes it all the more seductive, and a certain obstinacy, a refusal to take ‘no’ for an answer. One suspects that she would agree with Thomas Jefferson’s comment that “a little rebellion now and then is a good thing.”

During her years as Principal she worked to consolidate what had been so hardly gained. At the heart of her thinking had been the structured training of textile conservators at postgraduate level and a two-year pilot course had been established in 1973 under the auspices of the Courtauld Institute. In 1978 the experience gained on this pilot led to the establishment of the three-year postgraduate Diploma in Textile Conservation which has continued to be the core of the Centre’s academic programme. In these years, too, Karen published extensively at a time when this was not standard practice for textile conservators and in so doing encouraged informed debate of key issues and practices. The students who have passed through her hands are now employed in museums and other organisations throughout the world.

Karen retired in 1986 leaving to her successors a flourishing Centre that has triumphantly realised the hopes that were born in Ealing. It is now a leading international centre for the education of textile conservators, committed to developing and disseminating techniques for the preservation of the textile heritage. Karen’s influence is all-pervasive: in the commitment to high professional standards; in the stress on documentation and interdisciplinary co-operation; and particularly in her emphasis on respect for the integrity of the historic object and the need to work with it and see what it tells us. From this, perhaps, stems her determination that conservation should not be taught in an “ivory tower” environment; and so a working conservation studio is an integral part of the Centre’s activities and its Conservation Services Department has conserved thousands of textiles from the UK and abroad. It is a remarkable monument to the vision of a remarkable woman.

Mr. Deputy Vice-Chancellor, I have great pleasure in presenting to you Karen Finch as eminently worthy to receive the degree of Doctor of Letters, honoris causa. 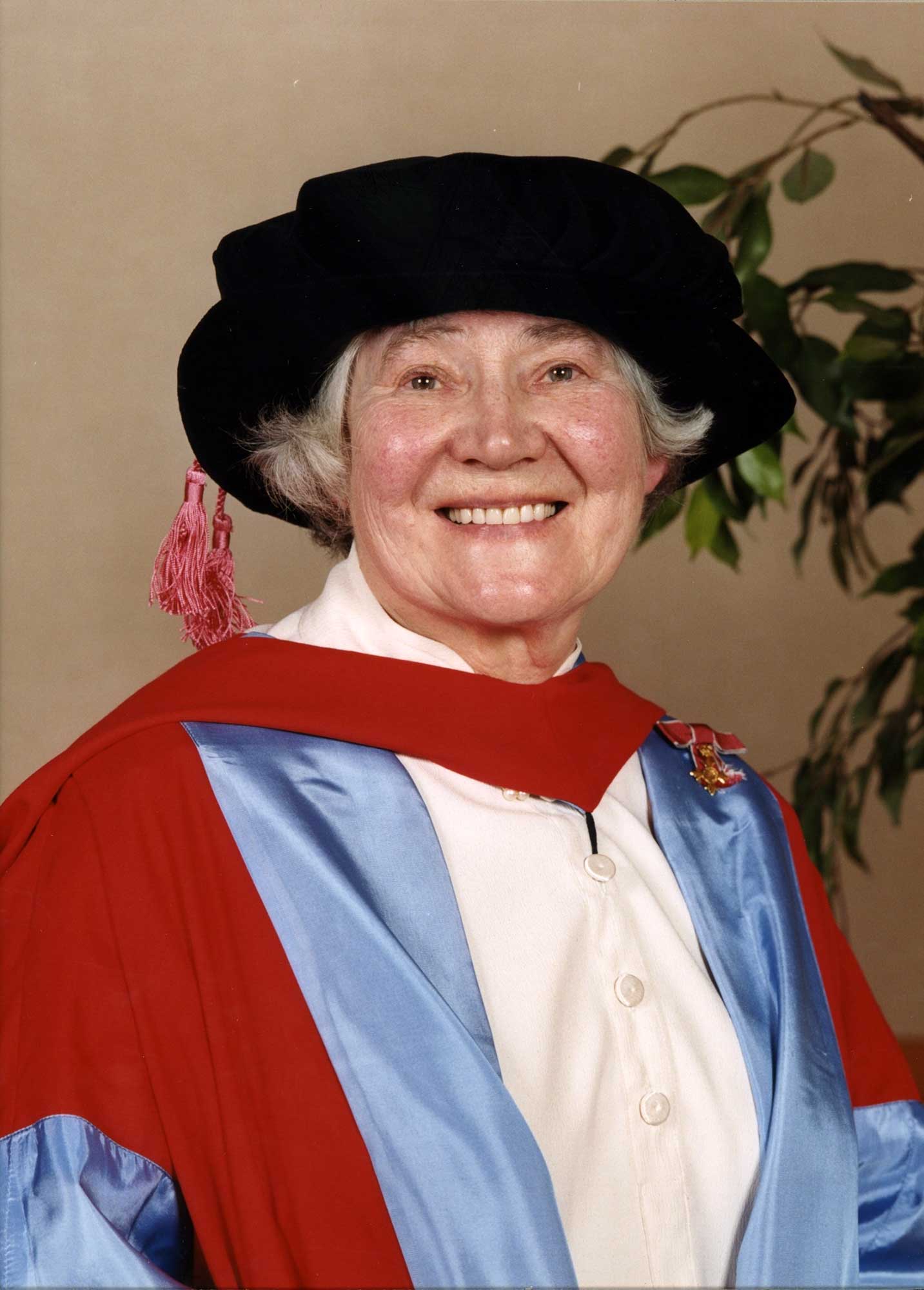 Portrait at the time of the presentation of Karen’s honorary doctorate from Southampton University, 1999

Karen Finch founded the Textile Conservation Centre, which became part of the University of Southampton in 1998. She has taken a leading responsibility for promoting and developing the profession of textile conservation in this country through her own personal expertise, and has lobbied extensively for the development of scholarly education for conservators. She personally established the first scientifically-based course in textile conservation in Europe through the Textile Conservation Centre.

The Textile Conservation Centre, which merged with the University of Southampton in August 1998, relocates from Hampton Court Palace to a purpose-designed building on the Winchester School of Art campus in August this year. Founded in 1975 by Karen Finch OBE, the Textile Conservation Centre is internationally recognised for the quality of its education and conservation work. From September, the Centre will otter a two year MA Textile Conservation and a one year MA Museums Studies: Culture Collections & Communication. Uniquely, it also has a department with trained, experienced conservators which offers a commercial conservation service and treats a huge variety of textiles for museums, heritage organisations and private clients in the UK and abroad.