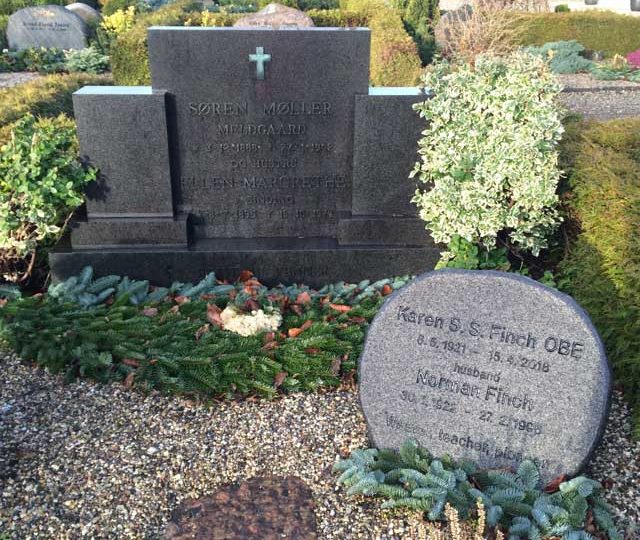 An ornament to the churchyard

Blog
Second anniversary of Karen's death
An ornament to the churchyard
Apr 15, 2020 • By Katrina Finch 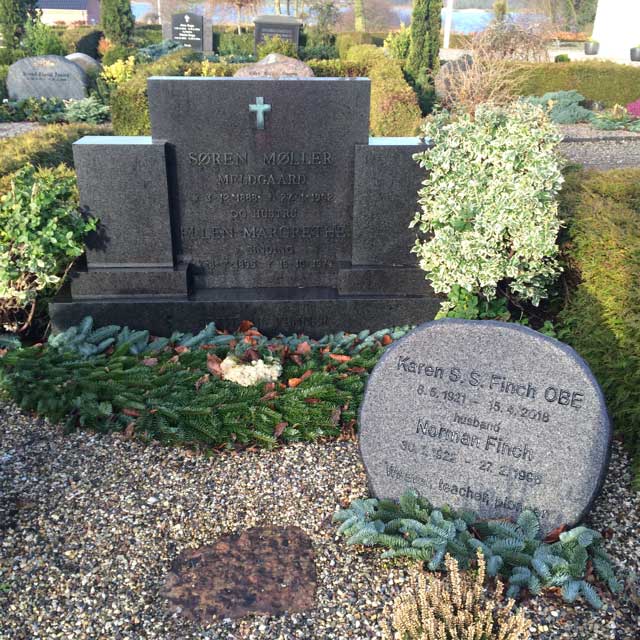 Karen's gravestone, with her parents' gravestone behind

I chose this extract from the oral history already published on Karen’s website because first of all I thought it would be heartwarming to hear my mother’s voice and secondly it provides a prescient and amusing adjunct to the recent registration of her gravestone by Viborg Museum.

Passage from the oral history interview conducted by The Foundation of the American Institute for Conservation (FAIC) on 16 July 1985. The Interviewer was Dr Vicki Cassman, who later became Professor Emerita, University of Delaware. Published here from the transcript kindly provided by the FAIC.

Audio of the full interview can be found here. The passage below starts at the 1 hr 54 minute mark. 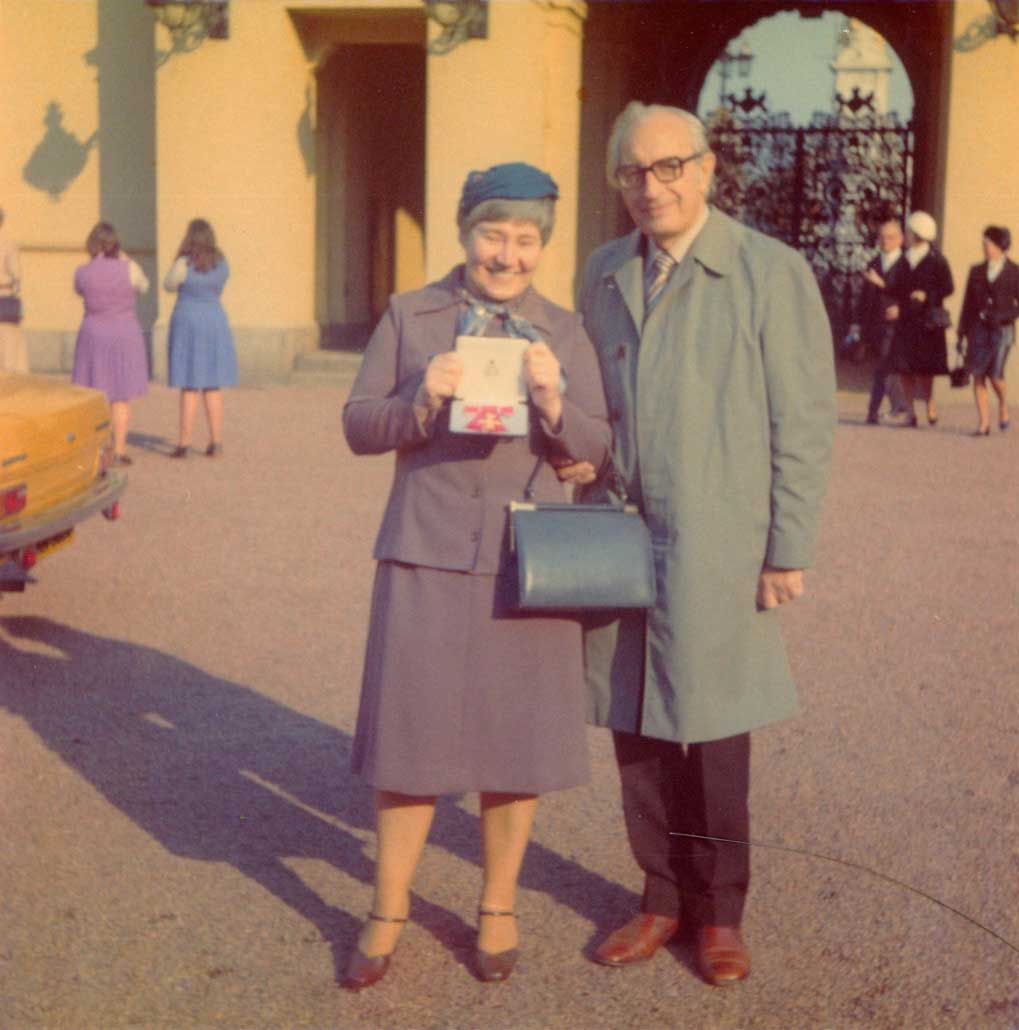 Karen, holding her OBE, with Norman at Buckingham Palace after the Investiture ceremony 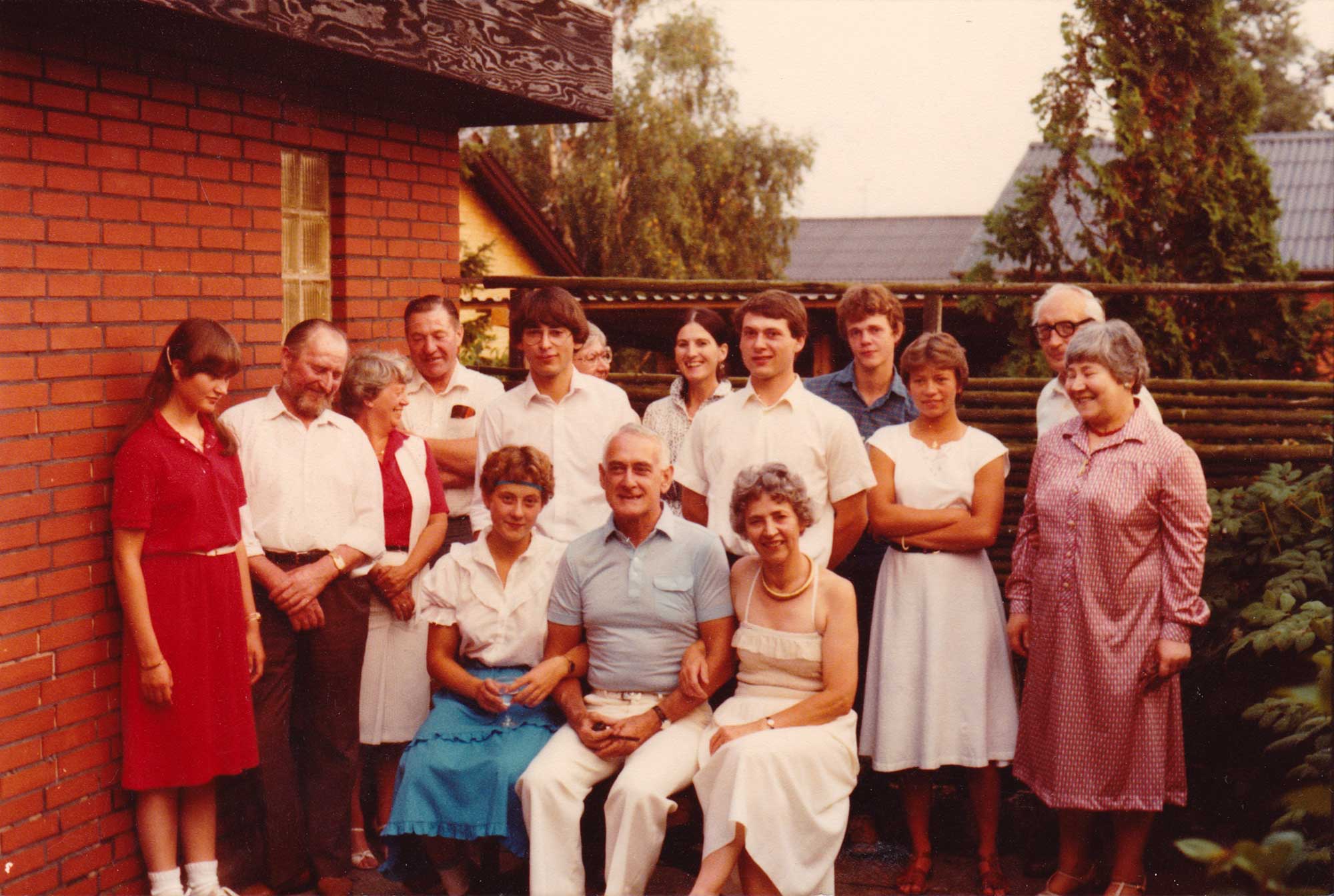 Family in Denmark celebrating James and Grethe Bulman-May’s silver wedding anniversary, in August 1982. James and Grethe are seated in the front row along with their daughter Ellen Margrethe. 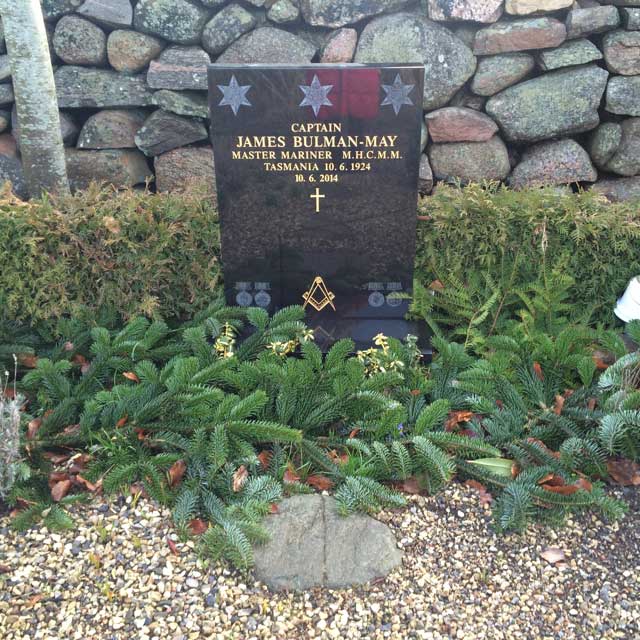 James Bulman-May is buried in Rødding Churchyard. He designed his own headstone.

So, actually, let’s change the subject a little bit now. Actually quite a bit. I was just curious about your little OBE. What does it mean, and when did you get it and what were the circumstances?

It means an Officer of the Order of the British Empire. And I will give you some of the books to read about it. It is given for merit and I suppose it was because of the work that I had done in conservation. It was 1976. I’m very pleased, of course, and proud to be recognised. Obviously, it’s not just for me, it’s all the people who helped with the work. It’s for Greta (Putnam) and Norman (Finch) and Danielle (Bosworth) and everybody who helped to get the TCC off the ground. It was quite amazing really, especially for my family in Denmark. Should I tell you terrible stories on this tape, too?

My family in Denmark are not very easily impressed. We’re all country people and don’t show our feelings much. I wrote and told them about it of course, and they were pleased, and congratulated me and that was the end of it. Because as far as they were concerned if I had done something that was worth doing, then obviously, I deserved the recognition.

Then my brother-in-law [James Bulman-May], who is Australian, came back from sea. He captains super tankers, he’s a very royalist Australian. And he wasn’t at all satisfied with what he considered a lukewarm reception of this great honour that had been bestowed on me. And he did everything he could to make my family see how marvellous it was, especially for a foreigner. And they just sat there, because we’re all very good at that. Just sitting there and letting everything appear to wash over us and not showing any feelings about anything. But eventually he remembered the thing that really made their day. Namely that the Danish Order of the Knight of Dannenbrog can’t be used for anything, I mean, you can’t put it on your letterhead as you can the OBE, or anything like that. But your family can, however, have it on your gravestone when you die. It was when he said: “You must get her home when she dies, she’ll be such an ornament to the churchyard”, that they capitulated.

That did it, my sister right away rushed to the telephone to tell me. I thought that was really something.

Leave it to the Australians.